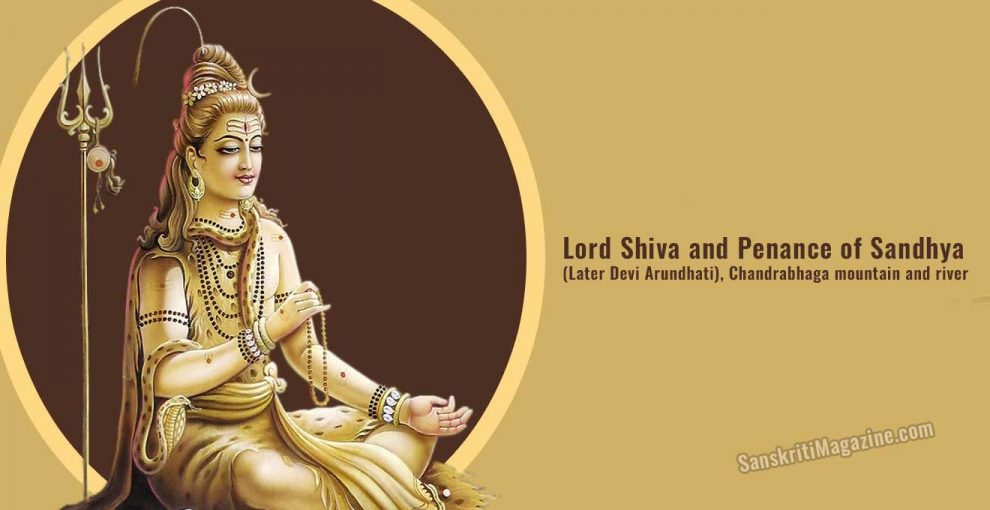 Shiva Purana (Rudra Samhita – Sati Khanda 5): Introduction: Sandhya was the daughter of Lord Brahma born from his mind. She was looked at with lustful eyes by Brahma and also by other sages due to the influence of Kamadeva. She inturn also had passionate feelings. Therefore she decided to give up her body by tapas and also establish a tradition that no new born will have lustful feelings.

Vashistha instructing: To make her penance successful, Lord Brahma told sage Vashistha to go to the Chandrabhaga mountain and instruct her in tapas. Sage Vashistha went to her taking the form of a brahmachari luminous with tapas and enquired about her purpose. She revealed her purpose and also sought instructions from the brahmachari for performing tapas. The brahmachari instructed her to meditate on Lord Shiva and repeat the mantra “Om Namah Shankaraya Om”. He also told her to observe silence and take bath while worshipping Hara. During the first and second sasthakalas she should only take water. During the third sasthakala she should observe complete fast.

The tapas: Receiving the instructions from the brahmachari, Sandhya started performing tapas on the bank of Brihallohita lake. She meditated on Lord Shiva and recited the mantra given to her. In this way four yugas elapsed.

Shiva giving darshan: After four yugas have elapsed in tapas, Lord Shiva displayed His form to her both from within as well as outside on the sky. Sandhya became nervous thinking about how to pray to Lord Shiva. Lord Shiva entered her heart and bestowed divine knowledge, divine speech and divine vision. Becoming endowed with divine knowledge Sandhya eulogized Lord Shiva.

Shiva granting boon: Hearing her eulogy, Shiva became pleased and told her to ask for a boon. Sandhya asked the first boon that no living being should have lustful feelings immediately after birth. She asked the second boon that no woman in the three worlds should match her. She asked the third boon that none of her creations should be lustful. If any person (apart from her husband) looked at her with lust, he will go towards his own downfall and become an eunuch. Shiva granted these boons and also told her that her husband would be a great ascetic and will live with her for three kalpas.

Giving up her body: Sandhya decided to give up her present body in tapas. For this Lord Shiva told her to go to the place on the bank of river Chandrabhaga where sage Medhatithi was performing the great Jyotistoma yagya spanning twelve years, and then enter into the fire of the yagya. Shiva told her that she will be invisible while entering the fire. Thereafter she will be born as the daughter of sage Medhatithi. While entering the fire she should remember the boons sought by her. As per the instruction of Lord Shiva Sandhya gave up her body by entering into the fire of yagya. While entering she sought the brahmachari (sage Vashitha in that form) as her husband.

Birth as daughter of Medhatithi: At the end of the yagya, sage Medhatithi got a girl from within the fire whose complexion was like molten gold. Sage Medhatithi delightfully took up the girl and gave her the name Arundhati. The girl started growing up as the daughter of sage Medhatithi at Tapasaranya on the bank of river Chandrabhaga.

Preserve Nature, And Nature will preserve Us,
Simplify Life, And make the Nature thrive,
Plant Trees, And make our planet Green.

Can we be religious with faith in almighty and yet be scientific minded?
Pushpadanta (chief of the Gandharvas) and Mahimnastava / śivamahimnastotram
Comment