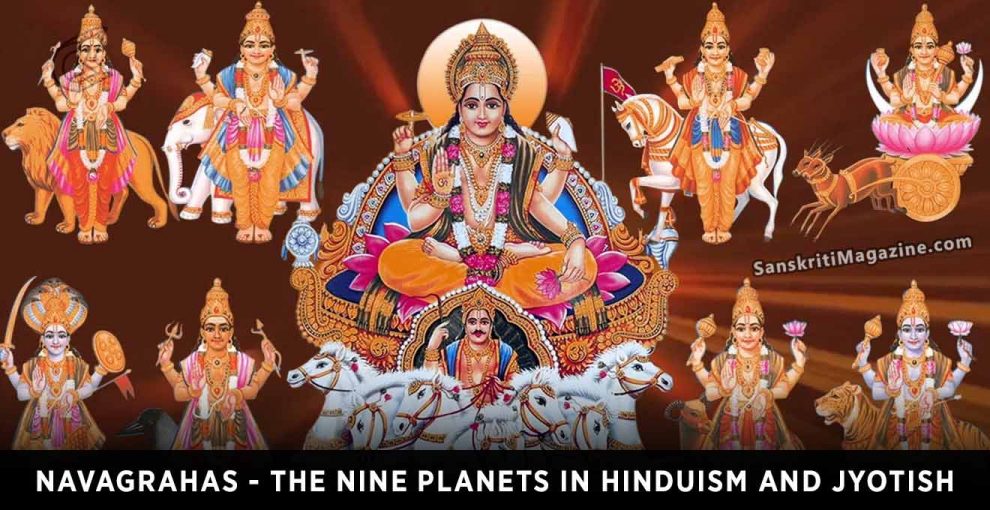 Just as many ancient civilizations had their own versions of astronomy, Hindus had their own version of astronomy from very ancient times. Hindu astronomy is based upon the configuration of the nine planets and their collective influence on the world in general and each individual in particular. Depending upon where these planets are located at the time of a person’s birth, Hindus believe that the possibilities and potentialities of his life and energies are determined well in advance.

The nine planets are collectively known as Navagrahas. They are worshipped in Hinduism for good luck or to overcome adversity, bad luck or misfortune arising from past karmas or birth related defects (dhoshas. They are found in most Hindu temples either grouped together on a panel or on a pedestal in commonly visible areas of the temple. Devotees usually propitiate these gods before offering prayers to the main deity in the sanctum sanctorum of the temple. Of the nine deities, seven are named after the planets in the solar system, and correspond with the names of the seven days in the week of the Hindu calendar.
Rahu and Ketu 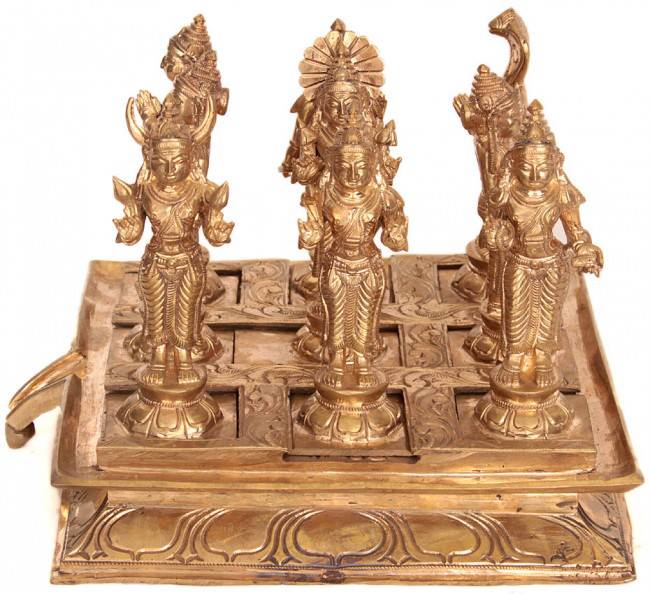 The remaining two deities are actually demons who managed to gain a place in the pantheon through an act of trickery. Their names are derived from either comets or from the dark and somewhat hostile planets of the solar system (Neptune and Pluto). Depending upon their location in the planetary system and their association with the remaining deities, they are deemed either auspicious or inauspicious.
Significance in astrology

The nine planetary gods have a great significance in Vedic astrology. Hindu astrologers draw the birth charts of individuals based upon the their position at the time of their birth. Depending upon where they are located in the astrological chart at a given time, they exert positive or negative influence upon people and their destinies. The position of Sani, Rahu and Ketu are especially considered important. If their positions are not favorable, astrologers suggest remedial measures to pacify the planets and ward off their negative influence.
Navagraha temples

While Navagrahas are usually found in many temples as subordinate deities, there are some temple which are exclusively built for them where they are worshipped as the main deities. One such temple is the Navagraha temple located on the banks of the river Kshipra in the outskirts of Ujjain, a famous pilgrim center of Saivism in central India. Some times we also come across temples built exclusively for only one of the Navagrahas such as the temples built for Surya and Sani in many parts of India. For example, there is a famous temple of Sani near Hindupur, which is frequented by many devotees.
Description of Navagrahas

A brief description of each of the Navagrahas is given below: 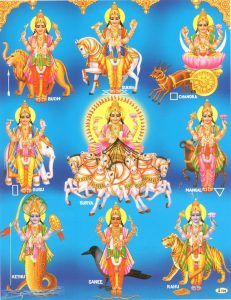 1. Surya (Sun): He is the Sun god, also called Ravi. In the company of the other planets, he generally stands in the center facing east, while the other planets stand around him in eight different directions, but none facing each other. He rides a chariot that has one wheel and pulled by seven while horses. The seven horses symbolically represent the seven colors of the white light and the seven days of the week.

2. Chandra (Moon): Also knows as Soma, and probably because of his waxing and waning qualities, in the images he is never depicted in full. We see him with only his upper body from chest upwards, with two hands holding one lotus each, riding upon a chariot drawn by 10 horses.

3. Mangala (Mars): Also called Angaraka, Mangala is a ferocious god with four hands. In two hands he holds weapons, generally a mace and a javelin, while the other two are held in abhaya and varada mudras. He uses ram as his vehicle.

4. Budha (Mercury): We generally see him depicted with four hands, riding upon a chariot or a lion. Three of his hands hold a sword, a shied and a mace respectively, while the fourth one is held in the usual varada mudra (giving gesture).

5. Brihaspathi (Jupiter): Brihaspati also known as Brahmanaspati is the teacher of gods and is praised in many hymns of the Rigveda. He is generally shown with two hands, seated in a chariot driven by eight horses. The eight horses probably represent eight branches of knowledge.

6. Sukra (Venus): Sukra is the teacher of the demons and the author of Sukraniti. He is generally shown with four hands, riding upon a golden or a silver chariot drawn by eight horses. Three of his hands hold a staff, a rosary, a vessel of gold respectively while the fourth one is held in varada mudra .

7. Sani (Saturn): Sani is a turbulent and troublesome god who makes and breaks fortunes by his influence and position in the planetary system for which he is invariably feared and especially worshipped by those who believe in Hindu astrology. He is generally shown with four hands riding upon a chariot, or a buffalo or a vulture. In three hands he shown holding an arrow, a bow and a javelin respectively while the fourth one is held in varadamudra.

8. Rahu: His image resembles that of Budha (Mercury) in some respects but both gods differ fundamentally in their nature and temperament. He is generally shown riding a dark lion, in contrast to the white lion of Budha. But just like the other god, he carries the same weapons, namely a sword, a javelin and a shield in his three hands, while his fourth hand is held in varadamudra.

9. Ketu: In Sanskrit Ketu (Dhuma ketu) means comet. The scriptures describe him as having the tail of a serpent as his body, a description which very much matches with his connection to the image of a comet. However in the images, he is usually shown with a poke marked body, riding upon a vulture and holding a mace.
Symbolism

Of the nine planets, only seven are actually gods and the other two, Rahu and Ketu are demons. The seven are usually spoken as planets, while the two are compared to comets and the like, having a shadowy influence upon the destinies of people. The names for the seven days in the week are derived from the planetary gods. As can be seen from their names, some of the deities included in the Navagrahas are actually Vedic gods. Most likely, the concept of Navagrahas is later Vedic concept.

There is no mention of the Navagrahas in the early Upanishads. The Brihadaranyaka Upanishad (3.2) speaks of eight grahas and eight atigrahas in the body in the sense of grasping deities (sense-organas) and overseeing grasping deities (sense-objects). The eight grahas mentioned in the Upanishad are incoming breath (prana), speech, tongue, eye, ear, mind, hands, skin. Their overseeing grasping deities are apana (downward breath), name, taste, color, ear, desire, touch. We do not know whether this concept of grahas in the body underwent a transformation subsequently. The Navagrahas are not the actual planets in the modern sense, although they are called planets. They are deities in the Cosmic Person with corresponding presence in the microcosm. Their positions in the body as well in the world influence the course of events both at the universal and individual planes.

Following is the specific information with regard to the nine planetary gods, is adapted from Wikipedia.