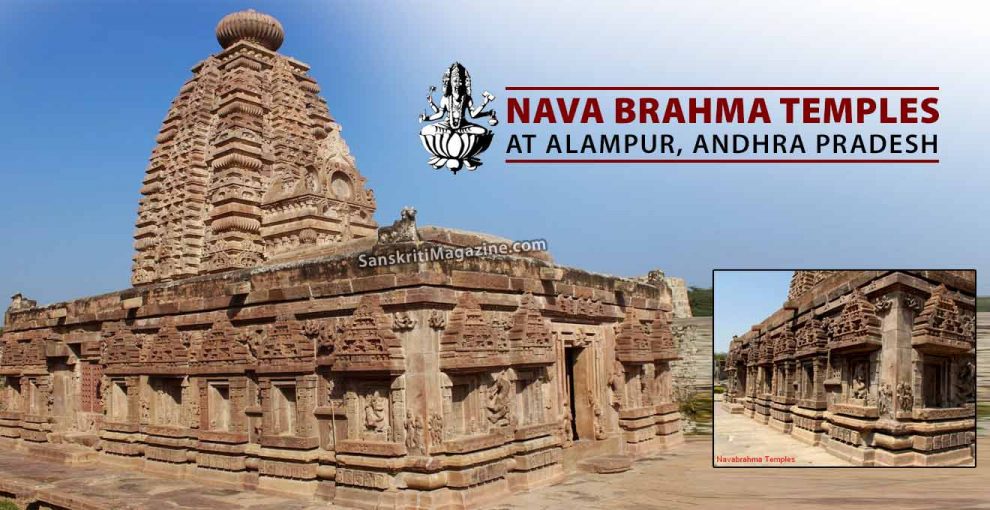 At Alampur, in the Mahbubnagar district of Telangana, is an ancient temple complex known as Navabrahmeshwara Theertha, or the Nava Brahmas (nine shrines). Built in the 7th century during the Chalukyan period, the area was previously known as Hatmpura, Halampuram, Hamalapuram and Alampuram.

About 200 km from Hyderabad, Alampur is situated on the banks of the Tungabhadra River, which flows from south to north in this place. This spot is also the confluence of the Tungabhadra and Krishna Rivers, and is therefore known as Dakshin Kasi, or the ‘Varnasi of the South’ It is considered the western gateway to Srisailma Temple, the revered Jyotirlinga Shivastalam.

The Nava Bhrama temples were built by the Badami Chalukyas, who reigned for about 200 years, from the mid-6th century onwards. The Badami Chalukyas built numerous temples in Karnataka, and there are many exceptionally beautiful examples of their devotional sculptures in and around the temples. We have often featured images of the super-excellent Badami Dasavatar sculptures here in the Sun over the years.

The southern, eastern, and northern gateways are called Siddhavattam, Tripurantakam, and Umamaheswaram, respectively. Enclosed within a courtyard are fifty separate tirthas in the Alampur complex, eighteen maha-tirthas, and sixty-four ghats. Lord Brahma himself is said to have built nine of the temples in this complex, including the Bala, Kaumara, Arka, Veera, Vishwa, Garuda, Swarga, Padma and Taraka Brahmeswara. While Lord Brahma is not worshipped in any of these temples as a presiding deity, many devotees come to this place and offer him worship. 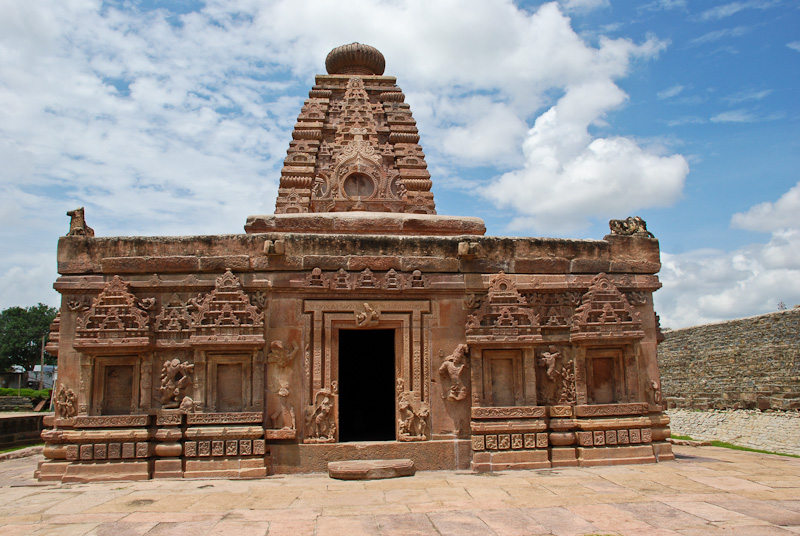 The complex is divided into two groups of temples, called the Brahmesvara and the Papanatha, which are on either side of the village. These temples do not follow the traditional Dravidian style of architecture, but are closer to the Northern and Western Indian styles. The shikharas (spires) of the temples have a curvilinear form and are adorned with miniature architectural devices. The floor plans and ornamentations of the temples resemble those of some the rock cut temples in Western India.

The Papanatha (Papanasam) temple cluster has over 20 shrines of varying sizes and styles, the most important of which is the Papanaseswara temple.

The principal temple in the Brahmesvara group of nine temples called Bala Bramha. It sits in a cluster of shrines, and bears a striking resemblance to the Papnatha temple. Active worship has gone on in this temple for centuries, and the structure has therefore been renovated numerous times.

The Bala Brahmesvara Deity is resplendent, and is considered a Jyortirlingam. Interestingly, all of the water used for abhisheka in the temple is brought in from outside, but not a single drop ever comes back out of the temple. There are murtis inside the temple of Lord Nrsimhadev, Jogulamba, Durga, and various rishis. In the courtyard are Mukhalinga, Sahasralinga and Mahishasuramardini, and a small Devi shrine.

Another of the most important shrines, Swarga Brahma has a porch to the east with six pillars, which are ornamented with amalkas. The doorway has horned Dwarpala, and carved images of Ganga, Jamuna, and Garuda with Naga are found on the lintels.

The temple has a curvilinear shikhara of Northern style, with a carved figure of Shiva dancing in the chaitya window of the sukanasi. The style of carving here is the same as that found in the Vishwa Brahma temple. Another murti of Lord Shiva shows him in a pensive mood, bending down graciously to Parvati. 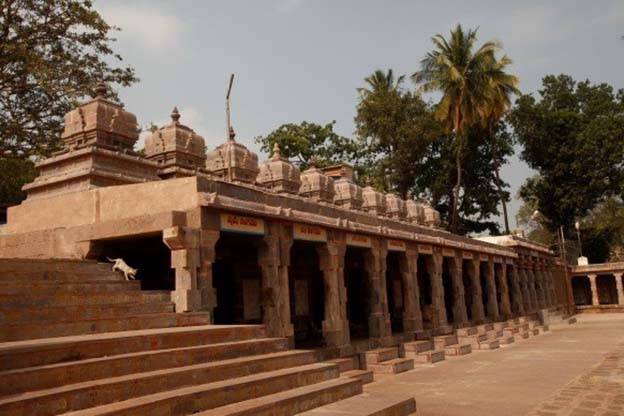 Similar in structure to the Swarga Brahma shrine, in this temple resides a Shivalingam of clear stone with a mirror-like finish, along with two Dwarpalikas carved near the square gateway, with a flying figure (Vidyadhara) on the top. Unfortunately, nearly all of the sculptures on the facade of this temple have been destroyed, and the temple is in ruins.

Elaborate carvings on the shrines pillars distinguish this temple. Many ornately sculpted lintels and side panels are found along the walls.

This temple is now completely in ruins, the roof entirely gone.

The porch of this temple is ornamented with very intricate pillar carvings. The construction is similar to most of the other Nava Brahma shrines. There is a fascinating row of seven heads carved into the lintel over a hallway door, although its uncertain who these personalities are (perhaps the attendants of Kumara).

Similar to the other Nava Brahma shrines, this temple has no distinguishing features. 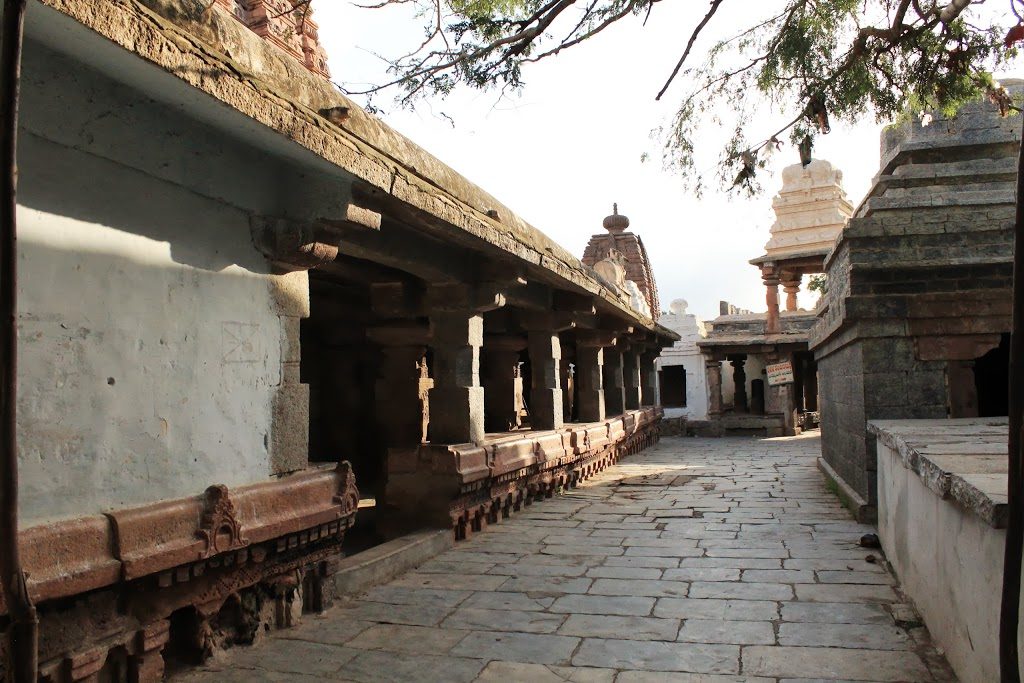 The temple is recognizable by the fact that it has no porch. Some find it to be one of the most artistic temples in the complex. The floor plan of the temple is similar to the Swarga Brahma, and the murtis found inside are also similar, in theme and execution. This site has also been attacked by vandals. Many scenes from the epics were sculpted here.

Built in emergent Southern style, the architectural features that distinguish this temple from the others are the garbhagriha, an antarala, and a porch. The very large stone blocks are unornamented, except for a devakoshtha in the center of each of the garbhagriha’s three walls of. An image of Paralambapada-lakshmi is found on the antarala doorway. The temple’s top has sala, kudu, and panjaran, graduating towards a gopuram style.

The Taraka Bhrama temple is partly in ruins, and has no image in the sanctum. There are Telugu inscriptions here from the 6th-7th century.

In addition to this very important collection of Brahmadev temples, Alampur is also home to a famous shrine of Sri Nrsimhadev with inscriptions from the era of Krishna Deva Raya of the Vijayanagar Empire, along with a Surya-narayana temple that has bas reliefs of the Dasavatar, a temple for Venkateshwara, and shrines for Mahishasura Mardhani, Kamakshi, and Virabhadra.