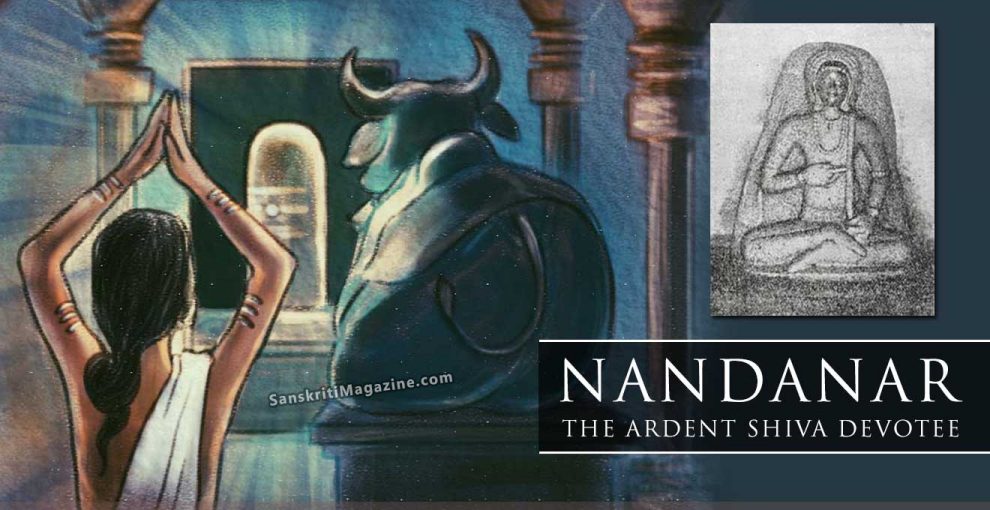 There was, during the thirteenth century, a group of devout Shaivite saints called the Nayanars. They loved Lord Shiva with all their hearts and were given the title Nayanar because miraculous events occurred in their presence. Sixty three such saints existed. This is the story of the twelfth saint: Nandanar. 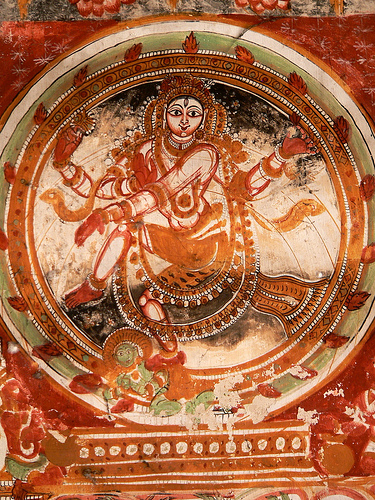 Nandanar was born to the lowest varna in the Hindu Varna System. He lost his father at a very early age, and while growing up, heard stories of Lord Shiva and fell deeply in paternal love for the Pitre Deva (Fatherly God). He used to sing his glories daily, compose songs just to please him and hence developed a deep rapport with his loving father, Lord Shiva. It just so happened that Nandanar was from the pariyah caste (untouchable). He was considered so low that it was a sin to even touch him. However, he had the heart of gold and loved god with such deep passion that he would spend hours dreaming about the Lord.

Nandanar lived as a farmer and worked for a Brahmin landlord. Though the landlord was never abusive, he never treated him with respect. One day he wanted to visit a Shiva temple in Thirupangur. That day, it was crowded with people and he was unable to see past the heads and as he was an untouchable, he was not allowed into the temple.

Over joyed by the ability to see his god he went home singing and dancing. Unfortunately he had taken his only day off and his landlord was very angry with him. He promised to work harder. As he was working he remembered that Arudra Darshana was coming up in a few days. Arudra Darshana is celebrated as a very holy day to worship Lord Shiva. As such, he wanted to go to Chidambaram to see and worship him. Unfortunately his landlord refused to give him leave and said that he will fire him if he took off. Nandanar begged and begged, pleaded and implored, fervently, and finally the landlord said, if he could harvest 250 acres (about 230 Football stadiums) of land he would go. With three days till the Arudra Darshana, he knew it was impossible to do so.

He spent the whole night crying, begging Lord Shiva, realising that it is impossible to go to Chidambaram. The next day, the entire field of 250 acres was harvested and the landlord fell at the Brahmins feet because he had a dream Shiva and his Army of Ganas were harvesting his entire field. The landlord gave him some money and sent him off.

As soon as he reached the temple, as he was an untouchable, the priests kicked him out of the temple and he began crying to lord shiva again. He spent the whole night crying, as the very next day was the holy day. That night, Shiva came in the dreams of these beastly priests and told them that a holy saint is wishing to see him. Despite this the priests still did not let him through. Finally the Diksheethar agreed to let him in, if he walks across fire. Nandanar was overjoyed, he screamed “HARA HARA MAHADEVA!!” and walked through hot coal but felt no pain and ran into the temple hugged the deity of Nataraja in Thillai Nataraja Temple, Chidambaram and disappeared, merged into the divine energy of Lord Nataraja.