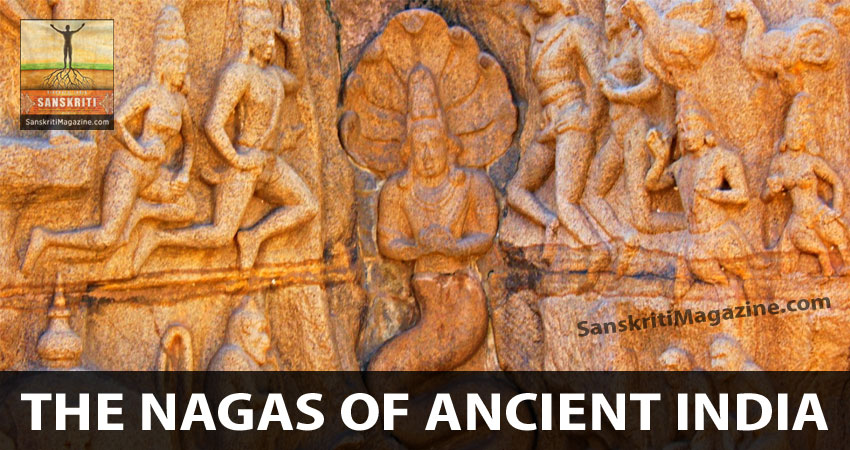 The Nagas are borne of Lord Brahma, who lay down while doing the work of creation and dropped hair from his body that transformed into snakes. Even while his body crawled along with its hands and feet contracted, there sprang from it ferocious serpents and Nagas with their hoods expanded. The Uragas are also serpentine beings, who are not exactly demigods but between the demigods and human beings.

Srimad Bhagavatam 5.24.31:
“Beneath Rasatala is another planetary system, known as Patala or Nagaloka, where there are many demoniac serpents, the masters of Nagaloka, such as Sankha, Kulika, Mahasankha, Sveta, Dhananjaya, Dhrtarastra, Sankhacuda, Kambala, Asvatara and Devadatta. The chief among them is Vasuki. They are all extremely angry, and they have many, many hoods — some snakes five hoods, some seven, some ten, others a hundred and others a thousand. These hoods are bedecked with valuable gems, and the light emanating from the gems illuminates the entire planetary system of bila-svarga.”

“Oh, king! Our army, equipped with iron bars (parigha s’akti), javelins (s’u_la), doubleedged swords (pat.t.asa), darts and sharp-edged spears, is very great. Why are you getting worried? After proceeding to Bhogavati city (the above of the Nagas in Patala, one of the seven regions under the earth), the serpents there were defeated by you. Kubera (the bestower of riches) who resides on the peak of Mount Kailasa, surrounded by many yakshas surrendered to you after doing a great battle.”

The links of naga with s’ankha and riches (Kubera’s s’ankha nidhi) points to the people who were s’ankha workers. S’ankhadvi_pa is not far from the mouth of Rivers Narmada and Tapati which emanate from the region where naga are venerated surrounding the nearby irrigation tanks of Vidisha. The link with maritime people who created Sarasvati civilization is clearly indicated out by these metaphors.

Besnagar is identified with ancient Vidisa (Nagara), is renowned in ancient literature as the capital of Akara and Dasawa and as a centre of cultural activities, with trade routes passing through it. Cunningham discovered the famous pillar as the Heliodoros pillar. More systematic excavations in 1963-5 by M.D.Khare (IAR 1963-4, p. 16; 1964-5, p. 19) brought to light the following sequence of cultures:

On the analogy of either Mesolithic sites, the period may be dated to c. 5000 B.C. The dates of the lower and upper limits of the Chalcolithic deposit may be worked out as c. 1800 to 900 B.C. based on the analogy of Kayatha and other Chalcolithic sites of central India and the upper Deccan. While Period Ill A is marked by the continuity of the black-and-red ware and by the presence of a negligible quantity of iron, the 14 C dates being 2420 + 105, 2350 + l00 and 2260 + I40 B.P., Period Ill B has punch-marked and Vidisa city-state coins, terracotta mother goddesses, a large number of iron objects and the NBPW.

Nagas of Padmavati are also known as the Nagas of Narwar. Naga kings are known to have ruled from Padmavati, Kantipuri, Mathura and Vidisha. Thus far, twelve Naga rulers are known from these places. One of the most common types of historical evidence of their rule is found on coinage of the day. Following are some of the designs typically found on the obverse (face) of the Naga coins: 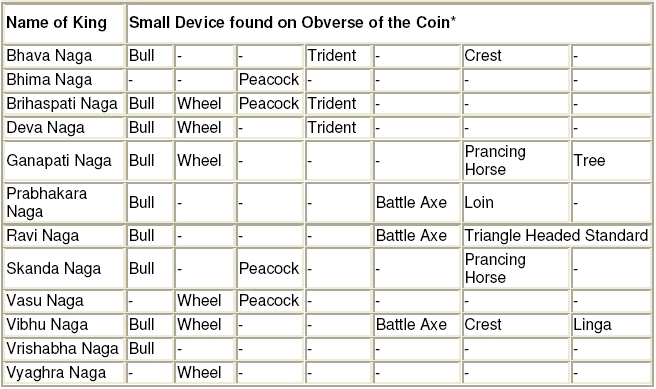 Vidisha, Sanchi, Udayagiri complex together with Dhar, Mandu, Eran, all in Madhya Pradesh have yielded ancient metallic objects (exemplified by the Delhi iron pillar), which have been investigated by archaeometallurgical teams led by Prof. Balasubramaniam of IIT, Kanpur and Dr. Anand M. Sharan of Memorial University of Newfoundland. After all, the Delhi iron pillar was made in Udayagiri, Sanchi and the pillar is shaped like the Heliodorus pillar. One is made of non-rusting iron, the other of stone. Both are a celebration of a unique, unparalleled technological heritage combined with the dharma-dhamma civilizational, aadhyaatmika continuum. The unique monuments of Hindu civilization exemplify merging of artha, wealth and dharma as purushartha (goals of life).

“On the eighth day, Iravan, the great Naga hero and son of Arjuna, delivered a fierce attack against Kaurva army with a very large force of cavalary (hayasadi) mounted on the best horses from Kambojas”
~ (MBH, Bhishamparava, Chapter 90, 3).

The controversy that arose between the two Naga kings Mahodara and Chulodara, to possess the jewel-throne, and how the Buddha averted a serious offensive by reconciling the two contending factions, during his second visit to the island, is not clearly mentioned in the Dipavamsa, although Mahavamsa mentions about it (CH. 1:47).

”The country that is known as Cambodia today was known earlier as Kambuja on the name of the great man Kambu. Kambu had initially been an Indian king who led a campaign, an expedition of victory of direction (digvijaya) in the East and entered an area having jungles that was being ruled by a Naga-worshipper ( Snake-worshipper ) king. Defeating him he married his daughter and developed that area. The beginning of the Kambuja empire can be traced to emperor Shrutavarma of Kaliyuga’s 32nd century ( i.e. the 1st century A.D. ). Shrutavarma and his descendant kings carried aloft the flag of Sanatan Dharma and culture in the Kambuja Empire. Later, from Kaliyuga’s 38th to 46th (i.e. 7th to 15th A.D.) centuries the kings of Shailendra dynasty ruled over Kambuja.”

By making a study of the many artistic representations of personalities in the Naga line, crafted in various materials and mediums that are specific to certain historical eras, it is possible to gather significant evidence of the Naga role in Vedic culture and civilization.

The best reading on this subject is H V Trivedi: Catalogue of the Coins of the Naga Kings of Padmavati, published by The Department of Archaeology & Museums, Madhya Pradesh, Gwalior, 1957.

There was no caste system in Hinduism
Life after Death: Near-Death Experiences of Hindus
Comment