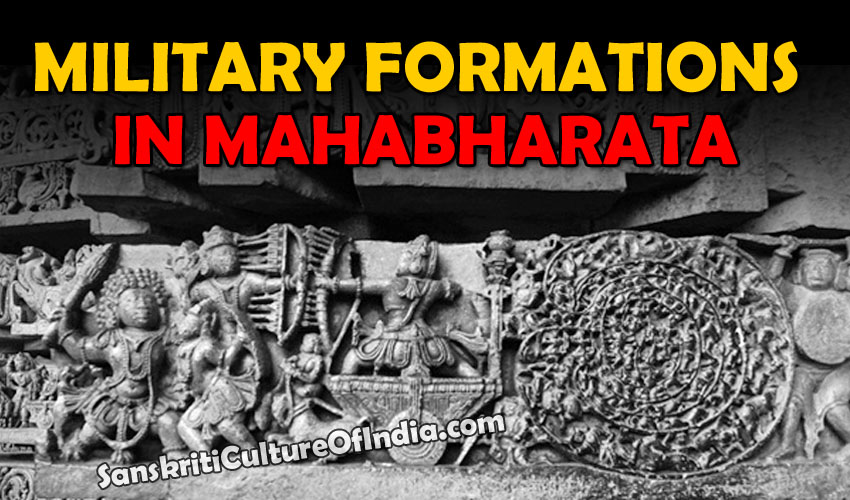 Indian epics abound in detail on military strategies, tactics and details of battle formations of the army.

In preparation of the Mahabharata War, Lord Krishna used all the guile of Military Strategies.

Some of the Strategies:

1. Chakra vyuha – formation of concentric circles in layers.
2. Shakata vyuha – formation of a cart wheel
3. Mandala vyuha – circular formation ( dont know how this is different from the above)
4. Urmi vuyha – formation resembling ocean’s waves
5. Sarvatobhadra vyuha – meaning “safe on all sides” – seems to have been a kind of square array in which the troops faced all the points of the compass (as per KMG interpretation)
6. Garuda vyuha (Garuda – The Mighty Bird).
7. Krauncha vyuha ( Krauncha is bird with a sharp pointed beak)
8. Vajra vyuha ( in the shape of the thunderbolt)
9. Suchimukha vyuha ( formation in the shape of a needle)
10.Padma vyuha (formation of a blooming lotus)
11. Sura & Asura vyuha hv been mentioned as well (cant interpret how they were)
12. ArdhaChandraakara vyuha (crescent shpe)
13. Makara vyuha ( crocodile-shaped)

There were also courses to get into and out of each formation.  These were fought while being taught the Dhanur Vidya.

Pandava army was arranged in this vyuha on the second day. Drupada was at the head and Kuntibhoja was placed at the eye. The army of the satyaki formed neck of the Kauncha bird. Bhima and Dhristadhymna formed both the wings of the Vyuha. The sons of Draupadi and Satyaki were to guard the wings. The formation of the army phalanxes in this manner was very formidable.

Bhishma also decided to arrange his army in Krauncha Vyuha. Bhurishrava and Salya were to guard the wings. Somdatta, Ashwatthama, Kripa and Kritavarma were positioned at different important place in the formation.

On the second day Bhishma arranged his army in Garuda vyuha. Bhishma was its beak. Drona and Kritavarna were the eyes. Kripa and Ashvatthama were at the head. The Trigartas the Jayadratha with their armies made the neck. Duryodhana, his brothers, Vinda and Anuvinda made the body. King of Kashala, Brihadbala formed the tail.

Arjuna observed this arrangement. He arranged the Pandavas army in consultation with Dhristadhymna, made the Ardha-chandra vyuha. cresent form. At the right end was Bhima, Along the ups were placed the army of Drupada and Virata. Neel, Dhristaketu, Dhristadhymna and Shikandi were placed next to them. Yudhisthira was at the centre. Satyaki, and five sons of Draupadi. Abimanyu were at left end, Ghatatkacha and Kokaya brother was there too. At the tip was Arjuna at his Chariot with Krishna.

On the fifth day of the war, Bhishma chose to arrange his army in Makarvyuha. Arjuna, Yudhisthira and Dhristadhyumna decided for the Hawk formation of their Army. All the warriors of both sides were assigned to specific places in the formations with special responsibilities.

On the sixth day it was the Pandavas who preferred the Makara Vyuha. The Kauravas chose Krauncha Vyuha. It is said that on this day Bhima was coming in and out of the Vyuha of the kauravas, killing soldier at will, swinging his terrible mace.

On the seventh day of the war Bhishma made Mandala Vyuha. It was circular formation very difficult to penetrate. The Pandavas countered it by Vajra Vyuha. On the dawn of the eighth day of the war, it was Oormi Vyuha for Kauravas, meaning ocean. It was the formation in which their army was arranged. It spread on the either side like waves of the sea. Arjuna chose
Sringataka Vyuha.

On the ninth day Bhishma went for a Vyuha called Sarvatobhadra Vyuha which meant safe from all sides. Bhishma was in the front, Guarded by Kripa, Kritaverma, Shakuni, Jayadratha, Kamboja and sons of Dhritarastra. Trigartas were also there. The Pandavas formed a Vyuha in shape of a constellation. The Pandavas and sons of Draupadi were leading from the front. Shikhandi Chekitan and Ghatotkacha were holding important positions to defend. Abhimanyu, Kekaya brothers and Drupada were guarding the rear.

On the tenth day the Kauravas army chose, Asura Vyuha and the Pandavas countered it by arranging their army in Deva Vyuha. In the lead was Shikandhi with Bhima and Arjuna to protect his sides. Behind him were Abhimanyu and the children of Draupadi. Satyaki and Dhristadhyuma were with them. Virata and Drupada had two charge of the rest of the army. Kekayu brothers, Dhristaketu and Gatotkacha were in their ranks. The Pandavas had the single pointed aim to kill Bhishma and were successful in that.

On the twelfth day of the war, the Kauravas chose Garuda Vyuha and the Pandavas countered it by going for the Ardha-Chandra Vyuha.