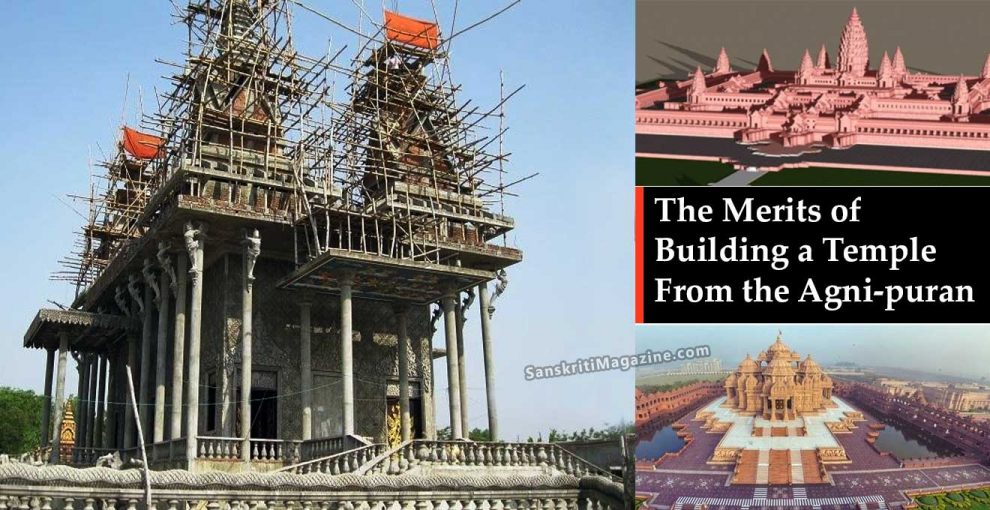 “Agni said: I will now describe the fruits of making temples for the residence of Vasudeva and other deities. He who attempts to erect temples for gods is freed from the sins of a thousand births. Those who think of building a temple in their minds are freed from the sins of a hundred births. Those who approve of a man’s building a temple for Krishna go to the region of Acyuta [Vishnu] freed from sins.

Having desired to build a temple for Hari, a man immediately takes a million of his generations, past and future, to the region of Vishnu. The departed manes of the person who builds a temple for Krishna live in the region of Vishnu, well adorned and freed from the sufferings of hell. The construction of a temple for a deity dissipates even the sin of Brahmanicide. By building a temple one reaps the fruit which he does not even gain by celebrating a sacrifice. By building a temple one acquires the fruits of bathing at all the sacred shrines. 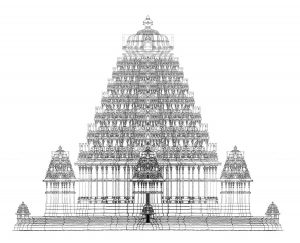 By making a temple with a lakh of rupees, or a thousand, or a hundred, or fifty, a man goes where the Garuda-emblemed deity resides. He who in his childhood even sportively makes a temple of Vasudeva with sand, goes to his region. He who builds temples of Vishnu at sacred places, shrines, and hermitages, reaps three-fold fruits. Those who decorate the temple of Vishnu with scents, flowers, and sacred mud, go to the city of the Lord. Having erected a temple for Hari, a man, either fallen, about to fall, or half-fallen, reaps twofold fruits. He who brings about the fall of a man is the protector of one fallen. By making a temple for Vishnu one attains to his region. As long as the collection of bricks of Hari’s temple exists, the founder of his family lives gloriously in the region of Vishnu. He becomes pious and adorable both in this world and in the next.

He who builds a temple for Krishna, the son of Vasudeva, is born as a man of good deeds and his family is purified. He who builds temples for Vishnu, Rudra, the sun-god, and other deities, acquires fame. What is the use to him of wealth which is hoarded by ignorant men? Useless is the acquisition of riches to one who does not have a temple built with hard earned money for Krishna, or whose wealth is not enjoyed by the Pitris, Brahmanas, celestials, and friends.

As death is certain for men, so is his destruction. The man who does not spend his money for his enjoyment or in charities and keeps it hoarded is stupid and is fettered even when alive. What is the merit of him who, obtaining riches either by an accident or manliness, does not spend it for a glorious work or for religion? [What is the merit of him] who, having given away his wealth to the leading twice-born, makes his gift circulated, or speaks of more than he gives away in charities?

Therefore, a wise man should have temples built for Vishnu and other deities. Having entered the region of Hari, he acquires reverential faith in Narottama [Vishnu]. He pervades all the three worlds containing the mobile and the immobile, the past, future, and present, gross, subtle, and all inferior objects. From Brahma to a pillar everything has originated from Vishnu. Having obtained entrance into the region of the Great Soul, Vishnu, the omnipresent god of gods, a man is not born again on earth.

Images made of gold and other metals yield the greatest religious merit. Sins accumulated in seven births are dissipated even at the very commencement. One building a temple goes to heaven; he never goes to hell. Having saved one hundred of his family, he takes them to the region of Vishnu. Yama said to his emissaries: ‘Do not bring to hell persons who have built temples and adored idols. Bring those to my view who have not built temples. Range thus rightly and follow my commands.

Persons can never disregard your commands, except those who are under the protection of the endless father of the universe. You should always pass over those persons who have their minds fixed on the Lord. They are not to live here. You should avoid from a distance those who adore Vishnu. Those who sing the glories of Govinda and those who worship Janardana [Vishnu or Krishna] with daily and occasional rites should be shunned by you from a distance. Those who attain to that station should not even be looked at by you.

The persons who adore Him with flowers, incense, raiment, and favourite ornaments should not be marked by you. They go to the region of Krishna. Those who smear the body [of Vishnu] with unguents, who sprinkle his body, should be left in the abode of Krishna. Even a son or any other member born in the family of one who has built a temple of Vishnu should not be touched by you. Hundreds of persons who have built temples of Vishnu with wood or stone should not be looked at by you with an evil mind.

By building a golden temple one is freed from all sins. He who has built a temple for Vishnu reaps the great fruit which one gains by celebrating sacrifices every day. By building a temple for the Lord he takes his family, a hundred generations past and a hundred to come, to the region of Acyuta.

Vishnu is identical with the seven worlds. He who builds a temple for him saves the endless worlds and himself attains immortality. As long as the bricks will last, the maker [of the temple] will live for so many thousands of years in heaven. The maker of the idol attains the region of Vishnu and he who consecrates the installation of the same is immersed in Hari. The person who builds a temple and an image, as well as he who consecrates them, come before him.

This rite of pratishtha [installation] of Hari was related by Yama. For creating temples and images of the deities, Hayashirsha described it to Brahma.”