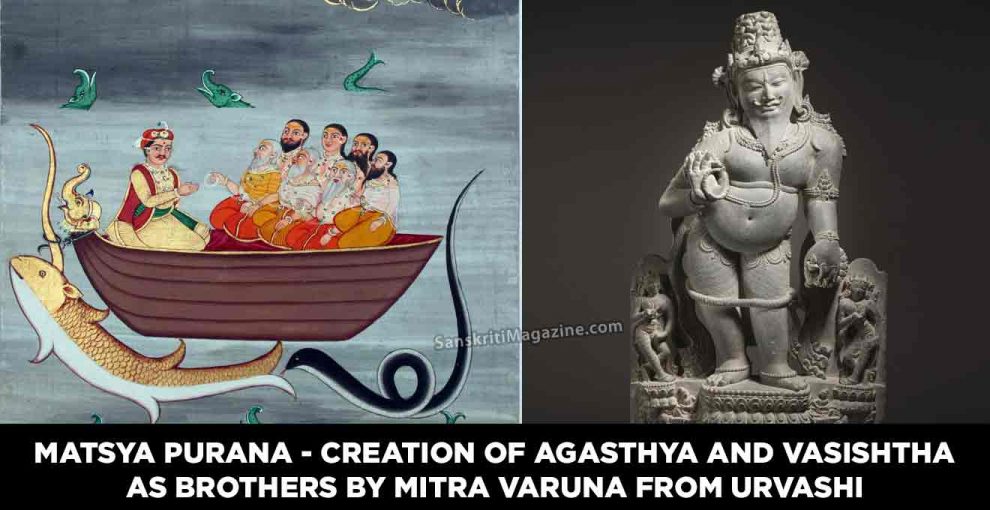 Sage Narada enquired of Bhagavan Shankara about the origin of Agastya Muni and Vasishta. Maheswara explained tha once Indra despatched Vayu and Agni to destroy Danavas and having successfully killed thousands of the enemies, ignored some Daityas like Taraka, Kamalaaksha, Paravasu, Kaladamshtra and Virochana as they fled away and concealed in deep Seas. The Danavas who hid themselves kept on tormenting human beings as also Devatas eventually.
Indra ordered that Vayu and Agni should dry up the Sea water, especially to kill dangerous Diatyas like Jambhasura, but the both the Devas argued that in the process of drying up the Seas even in a minor manner there would be serious havoc caused to crores of Jeevas. Indra was annoyed at their argument and cursed them to fall down on Earth from Swarga and both the Devas entered into a ‘Jala Kumbha’ or Water Pitcher as a single body.

Meanwhile, Sages Nara and Narayana were in Tapasya on Gandhamadana Mountain, and Indra was concerned that they might not be a threat to his chair; he despatched a few Apsaras to the Mountain along with Kamadeva but their attempts to tempt the Maharshis failed. As the Apsaras continued to be stationed there, Narayana Rishi created a damsel of exquisite attraction from his thighs and named her Urvasi; he desired that Apsaras should realize that their beauty was nothing compared to whom they could materialise as Urvasi and they could not possibly tempt Nara Narayan Maharshis, after all! Mitra (Sun God) and Varuna (Rain God) happened to see the damsel and could not resist the fall of their combined semen of Mitra Varuna which was deposited in the same Jala Kumbha (pitcher) that fell down from the Swarga and thus Agastya was born as Kumbha Sambhava.

Vasishtha too was reborn from the pitcher earlier since he felt offended when King Nimi did not properly attend to him as he visited the King and hence gave a curse to Nimi to live as ‘Videha’or without body, but the King too gave a return curse; both Nimi and Vasishtha approached Lord Brahma who solved the problem by retaining Nimi’s life in his Eyes and Vasishtha to be reborn to Mitra Varuna since the latter’s semen fell in the pitcher on seeing Apsara Urvashi. Subsequently Agastya married Lopamudra, absorbed the entire Ocean in his Kamandulu to isolate the Danavas to enable Indra to kill the notorious Danavas and released it later as his urine and was thus stated to be salty!; he also razed down the ego of Vindhya Mountain by making him bend for ever thus banning the Mountain to stoop for ever till the Sage’s return which never happened as he continued to stay down the Vindhyas.

There was also the legend attributed to Agastya about the Daitya brothers Ilvala and Vatapi, who knew the Mrita Sanjeevani Mantra; they would assume the forms of Brahmanas and seek the passers by to tempt them to a feast of goat-meat, and after consuming the meal ask Vatapi to come out and Vapati would come out piercing through the tummy of the stranger and the brothers would enjoy his meat.But Agastya Muni was too clever to bless the good food saying ‘Vatapi! Jeerno bhava’ and Vatapi was fully digested even before Ilvala was able to recite the Mrita Sanjeevani Mantra! [Till date, devotees recite Lalita Sahasranama and Aditya Hridaya scripted by Agastya Muni.Vasishtha, the Brahmarshi was the arch-enemy of Rajarshi Viwswamitra ever since the latter claimed Nandini the Celestial Cow and fought a battle in which Viswamitra was defeated. The enmity continued till once both the Rishis cursed each other to become birds and finally Brahma had to intervene and convert them back as human beings].

Agastya Muni satisfied Maheswara with ruthless penance for several years and secured boons of longevity for twenty five crores of years as long as thousand lives of Brahmas. The boon also covered that whosoever worshipped him for seven days for seven years with ‘Arghya’ or offering water addressing the Muni along with charities of a white cow and calf, silver vessel, and white clothes as follows would be blessed with good health, good Form, and contentment: Kaashapushpa prateekaasha Agni Maruta Sambhava, Mitraavarunayoha putra kumbhayoney Namostutey/ The first Arghya would provide Good Form, the second one Bhuvarloka and the third Swarloka.