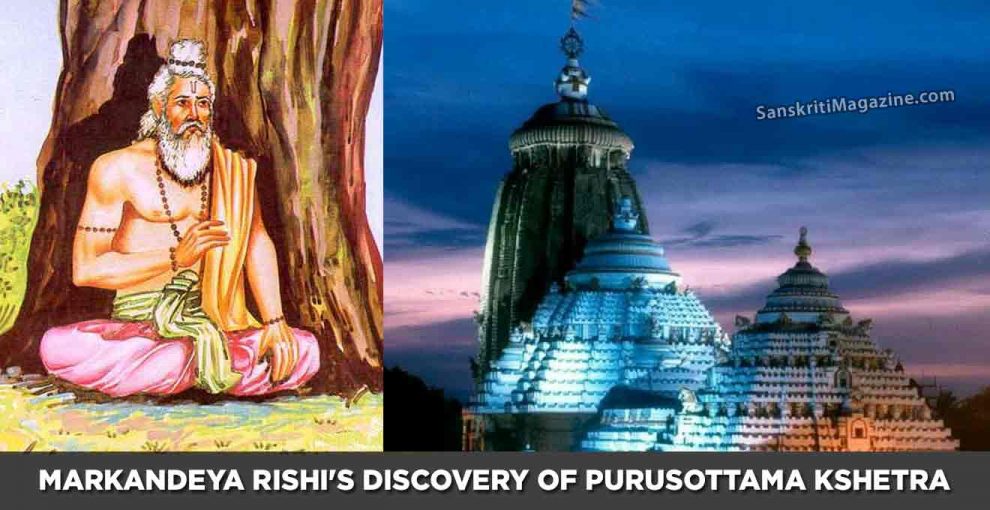 The glory of Puri Dham or the ancient Purusottama Kshetra is vividly described in the Utkal Khanda of Skanda Purana. The story of Rishi (Sage) Markandeya discovering this Kshetra at the time of Pralaya (Dissolution of the Universe) can be found there. The story goes like this-

Once at the time of Pralaya, when everything got submerged in the sea, Rishi Markandeya (who had been able to retain his physical body for seven kalpas) could not get a single piece of land to rest upon. So he became very worried. Nowhere could he get peace of mind. He was being carried away by the flow of water from one place to another. Finally, in this floating state he reached Purusottama Kshetra. There he saw the Akshay Vata and heard a child’s voice saying to him, “Markandeya! Do not worry; come to me and leave aside all your worries.”

The Rishi after listening to this strange voice (which he had never imagined of) got astonished. He thought, “In this all-engulfing water, this place (Kshetra) looks like a boat and in it this great Banyan tree is standing like a pillar. He began to wonder how this place had remained unaffected when everything else had been submerged in the water at that time of Pralaya, and who was calling him with such love and compassion. 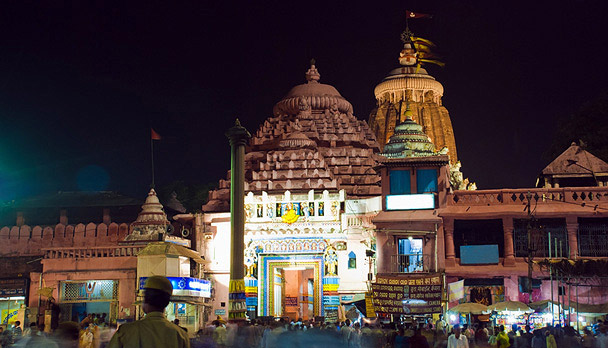 While he was thinking all these things and swimming in the water, the Rishi saw Lord Vishnu and Goddess Lakshmi. He was very pleased and paid obeisance to them. After that he prayed to Lord by reciting hymns of His praise. Hearing this Lord Vishnu was very pleased and said to the Rishi, “O Sage! You are very worried and in distress. It is because you are ignorant of my form. You have done a lot of penance, but as a result of it you have only been rewarded with a long life span.

Look at the child sleeping in the leaf of this Kalpa Vata. He is the ‘Kala Rupa’ of everybody. You can enter into his mouth and stay there comfortably.” The Rishi was astonished to hear this. Then he climbed the Banyan tree and saw the child form of Lord Vishnu. After that he entered His stomach through the mouth. Inside, he saw the fourteen cosmic worlds (Chaturdasa Bhuvana), gods, demi-gods, rishis, gandharvas, demons, seas, tirthas, rivers, mountains and cities. He also saw seven nether worlds (Patalas) and thousands of snake-women. He also saw the Sheshnag who was carrying the entire world on its head. He also saw everything that Lord Brahma had created during his creation of the universe.

But he could not find the end of the stomach of the child. Finally he came out of the mouth of the child and again saw Lord Vishnu with consort Lakshmi. Then the Lord said to him, “O sage! This strange place (Kshetra) is my eternal abode. This is neither affected by creation nor by dissolution of the universe. It is also not bound by the laws of the universe. A person who enters into this place knowing my eternal nature and presence here, never takes birth again.”

Then Rishi Markandeya prayed to the Lord to allow him to stay in that place. The Lord said, “I will stay in this place that gives salvation till the end of the Pralaya. After the Pralaya I will create a “Sanatana Tirtha” (eternal holy place) for you here, where you will worship Shiva ,my second form, and conquer death. Then the Rishi dug a tank by the help of the Chakra of Lord Vishnu in the Vayu (North-West) direction of the Banyan tree. Residing in this holy tank the Rishi worshipped Lord Shiva and conquered death. This tank is famous as the “Markandeyeswar Tank”. After taking bath in this tank and having a glimpse of the Shiva known as “Markandeyeswar”, one gets the benefit of conducting an “Ashwamedha Yagna”.

This Purusottama Kshetra spreads five kroshas into the great sea and two kroshas into the sea coast. It is surrounded by clear golden sands and a blue mountain. Lord Shiva himself resides here in form of Yameshwar to worship Lord Jagannath. By seeing and worshipping Him (Yameshwar), one gets the benefits of worshipping and seeing one crore Shiva Lingas.

Such is the glory of the Purusottama Kshetra. May everybody get the blessings of the Lord Jagannath and Lord Shiva in this holy place now commonly known as Jagannath Dham or Puri Dham. — with Srilan Srisukumaran.