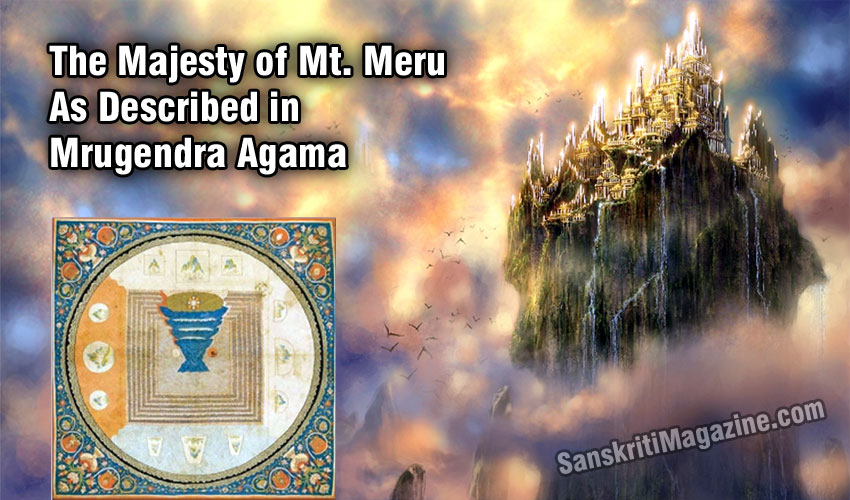 The following is a lucid translation of compiled excerpts from the Mrugendra Agama, chapter 13, in which Indra describes to Sage Bharadvaja the beauties of Mount Meru, center of the Prithivi-loka, or Earth plane.

In order to provide for their evolution, Lord Anantesvara, creates many worlds at various levels of existence. Here is explained the islands, rivers and forests of the Prithivi-loka.

The Jambudvipa (island of jambu trees) appears as the navel of the earth sphere. It is surrounded by the salty ocean whose size equals the Jambudvipa. At the center of the great island is Mount Meru, of the nature of gold, it is the supreme king of all mountains. Its effulgence exceeds the brilliance of the Sun. It is honored and frequented by the devas. The highest of the mountain’s three encircling ridges, of its upper section, serves as the dwelling place of the eight Lokapalas (directional Deities). The knowers of the scriptures call it Chakravata, and it shimmers with the resplendent rays of jewels. At the levels below, reside the Siddhas, Gandharvas and Maruts. On its summit are eight cities.

These cities belong to Indra and the other seven Deities, who reside in the eight directions. The city of Amaravati, in the east, belongs to Indra. It is beautified with the shimmering rays of clustered gems. Frequently resorted to by Siddhas, Sadhyas and Maruts, it rests upon a stretch of golden land. The city known as Tejovati, to the southeast, belongs to Agni. It abounds in red and whitish-yellow gems. Its many enclosures and gopuras are built of gold. The city known as Samyamini, belonging to Lord Yama, God of Death, is in the south. It is fortified with high ramparts built of iron. It is served by the soldiers of Yama. The city called Krishnavati belongs to Nirruti and is resorted to by the Daityas. Its palace resembles the palace of Yama and it is richly decorated with sprawling canopies, blooming with clusters of sapphire light.

The city known as Suddhavati, belonging to Varuna, the Lord of water, is in the west. It is formed of sphatika (crystals). Its buildings shine forth with the soft whites of the clouds. It is visited by aquatic beings such as tortoises, fish, sharks and others. In the northwest is the city known as Gandhavati, belonging to Vayu. It is richly decorated with glorious flags and banners of white and gold. It is encrusted with a multitude of gems. The city is served by etherial soldiers known for their strength and vigor. The city called Mahodaya, belonging to Kubera, is in the north. It is constructed of white stones such as moonstone and pearl, and is replete with palaces which shine like the Himalayas. It is extolled by hosts of brahmins and sages.

The city called Yasovati is in the northeast. It belongs to Ishana. It is constructed with every kind of precious gem and is served by the Rudras. These cities are capable of yielding the pleasures of all the seasons and appear reddened by the pollen of Brahma’s parijata flowers, which wafts through the mountain winds. These are indeed heavens designed for the eight directional Deities and for those who follow their guidance. In such, these cities are praised by the poets of Earth.

At Mt. Meru’s peak and through its center is the city of Manovati. This is the city of Brahma, honored by the directional Deities. The effulgent clusters of brilliant rays emitted by the precious gems of this city reach and redden the endless routes of space. The devas and the sages who are endowed with great splendor and glory do penance here, observing the yamas and niyamas and meditating on Brahma. They work to attain the supreme goals desired by them.

There are other mountains in the four directions below Meru. There are also nine islands and nine great prospering lands.

In order to effect stability to Meru it is surrounded by four supportive mountains. On each of these mountains is a heavenly tree. Their names are Kadamba, Jambu, Asvattha and Nygrodha.

A river originating from the fruit juice of the Jambu-tree continuously flows clockwise around Mount Meru, and having transformed the land into the nature of gold, enters into the ground at the mountain’s base. Upon drinking the juicy water of that river, the birds, snakes, deer and monkeys become gold in color, and, too, those who swim within its waters gain a golden hue.

The seven oceans encircling the nine islands are: the ocean of salt, milk, curd, ghee, sugarcane juice, wine and the ocean of pure water. Beyond the seventh ocean of pure water there is a great stretch of land infused with golden luster, abounding in gems, trees and mountains. At the exterior of this land is the mountain called Lokaloka, the front side of which always remains illumined, while its backside stays dark. The rays of the sun that fall on its summits become as cool as the rays of the moon. Beyond Lokaloka is a vast region of dense darkness, and beyond this dark region lies a great ocean called Garbhoda, the king of oceans, which extends up all sides of the Brahmanda, the golden, cosmic egg.

~ Dr. S.P. Sabharathnam Sivacharyar, of the Adi Saiva priest lineage, is an expert in ancient Tamil and Sanskrit, specializing in the Vedas, Agamas and Shilpa Shastras. This excerpt is from his recent translation of the Mrugendra Agama.