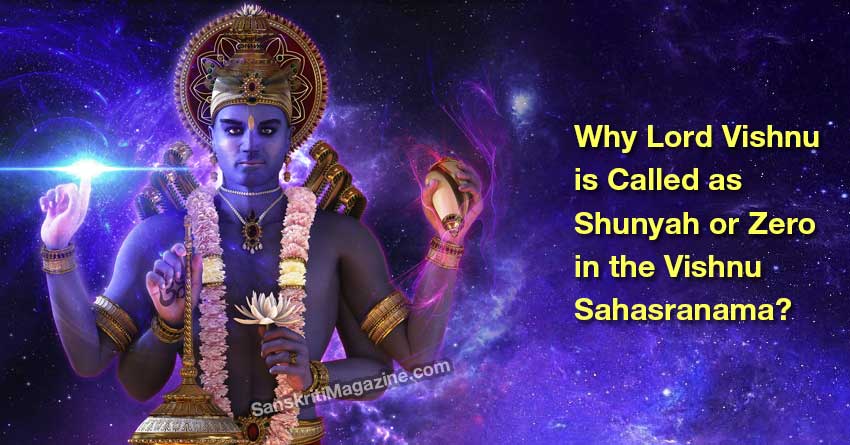 One of the “namas” in the Sahasranamam that I’m always intrigued by is the name “shunyah” given to Vishnu, which appears in sloka No. 79:

It would strike anyone as extremely odd that the Sahasranamam should choose to call Lord Vishnu as Zero! You can understand God being called “ekaha”, the One Supreme Being. The essence of all monistic theism lies in the belief that God is One (the Upanishad says, “sayaschayam purushe; yaschasavadhithye; sa ekaha”).

You can understand too God being addressed as “ananthaha” the Infinite, as in the Sahasranamam stanza 70:

Since God is Immeasurable it seems plainly alright to name Him “ananthaha” the Infinite. But how is one to explain hailing the Almighty as “shunyah” the Cipher?

There is a view that “If Infinity is immeasurable, so is Zero”. Mathematically speaking, one could define zero to be anti-infinity. If “Infinity” is immeasurable plenitude, “Zero” is immeasurable emptiness. If you were to imagine, say, an interminable series of values, from zero to infinity, floating somewhere out there in endless space, then, surely, Zero would be at one end of it while Infinity would be found at the other end, wherever, that is, the two ends may be found, if at all. And if you reflect upon it deeply, that would make out “Zero” and “Infinity” to be two sides of the same un-graspable coin.

By the same logic, you might say the Sanskrit “ananthaha” and “shunyah” might seem antonymous but in reality they mean the same thing. Hailing God Almighty as “Lord Infinity” is hence no different from hailing Him “Lord Zero”.

Incredible logic notwithstanding, we know for a fact however that the “Infinite” and the “Cipher” are never really the same thing. None of us would be willing to exchange one for the other if it came to a real choice between the two. If I go up, for instance, to a venerable “acharya” or “guru” and prostrate at his feet, I would expect him to shower his benediction upon me saying, “May you be blessed in life, my son, with Gods infinite Grace!” If instead the man were to say, “May Gods zero grace be thine in life!”, the blessing would stand transformed into a vicious curse, wouldnt it?

So then, why is God, who is Infinite Being, being called “sunya”, a Zero – the very opposite of infinity? The traditional commentators of the Vishnu-Sahasranamam offer us some explanation in their respective “bhashyas”.

In his commentary, Sri Sankara (6th CE) explains “sunya” as an apt “nama for God, the Supreme Brahman, who is “nirguna ” – i.e. the Being who is totally devoid of any qualities or attributes. In other words, according to Sankaras school of metaphysics, God is “guna sunyan”.

According to this explanation, God transcends all attributes. His qualities like omnipotence, omniscience etc. only serve to help us in ascertaining His reality but they do not “per se” define Him. The truth of Gods existence cannot be grasped by us with reference to His qualities or “guna ” alone, says Sankara. Brahman is to be apprehended as an Absolute Being who stands far apart from and quite beyond any of His infinitely (“ananthaha”) great qualities – i.e. He is “nirguna brahman”, a Being without qualities, a Being with “zero” qualities. Hence it is fit to call Him “shunyah”

Lets turn to the other explanation found in the commentary of Sri Parashara Bhattar (11th CE) on the Vishnu Sahasranamam titled “bhagavadh guna dharpanam”. 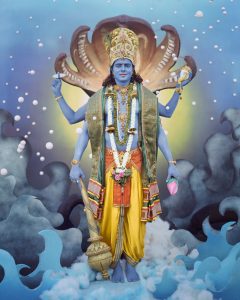 Bhattar explains “shunyah” in the typical way of the school of Visishtadvaitha theology. According to this school, God is the Supreme Abode of all auspicious attributes. The Almighty is full of innumerable good qualities like “gny+an+a”, “bala”, “aiswarya”, “virya”, “shakthi” and “thejas”. In Visishtadvaitha, God is “ananthakalyana guna ganan+” (to use a famous expression of Sri Ramanujacharya) – i.e. Brahman is Being with infinite number of happy and wholesome attributes. The theology next states that God, by corollary, is also totally devoid of inauspicious, un-wholesome or negative qualities.

From a purely theological standpoint both explanations above are equally valid and wholly satisfying (depending, of course, upon which school of Vedanta – Sankaras or Ramanujas – one is predisposed towards). All the same, for one who is not steeped in the various nuances and niceties of Vedhantic theology, (especially for one who cannot really appreciate the technical difference between the metaphysical “nirguna” and “savisesha” Brahman), the explanations of Adhi Sankara and Parashara Bhattar for “sunya” might only seem to resemble the case of the proverbial bottle that got described as “half-empty” by one and “half-full” by another.

Even leaving theological considerations aside, one can still regard Zero to be a remarkably apt “nama” for the Almighty. Common knowledge of the world around us reveals how allpowerful the concept of Zero, “sunya”, truly is. When we look at the history of Zero, we realize why “sunya” is almighty indeed!

Until about 1500 years ago nobody in the world outside India could count numbers beyond 9 without enormous difficulty. The entire Graeco-Roman Western world knew nothing about the Hindu-Arabic system of numerals that prevails in the entire world today. The Romans depended upon alphabets to denote numbers – such as I, X and C or with V, L and D. In their system the number 32 had to be written, for example, as XXXII but writing a number like 3200 or 32000 for the Greeks and Romans presented a huge, often insurmountable problem! For several centuries the Graeco-Roman civilization struggled with this cumbersome system of numbering. It was the principal reason why for almost a thousand years Western mathematics hardly advanced beyond being a method of elementary counting and mensuration using crude devices like the abacus. The Greeks and Romans had no knowledge of how to deal with large numbers, ratios, series, complex algebraic functions and calculations – all childs play for any high-school student today. Western thought simply stagnated for ages since it could just not grapple with the mathematical problem of large numbers and calculations.

Somewhere between 1000 and 1200 AD, the Western world came in contact with the Arab world and that was when the Hindu-Arabic system of numerals opened the eyes of the Europeans to a whole new world of mathematical thought.

The Arabs had for long borrowed and been using the Hindu system of numerals that had been in use in ancient India for more than a thousand years earlier. The Hindu system did not use alphabets but a simple but versatile scheme of numeric symbols starting from “Zero” – the famous “sunya” – and ending with 9. These symbolic numerals made it so easy to represent and calculate numerate values anywhere from zero to infinity in quick time. They enabled complex functions and calculations. They made it possible to represent the most formidable series of values by a mere formula which in turn facilitated further complex mathematical functions! The Western world realized – for the first time ever – the power of the Hindu numeral system: a power that became the inspiration for all the mathematical advancements to later come out of Europe: algebra, ratios, surds, functions such as squares, cube and root, series and progressions, logarithmic tables, quadratic equations… and so on and so forth.

It was the power of Zero, “sunya”, indeed, that made the European Renaissance possible – the Renaissance that eventually gave birth to all the wonderful discoveries of modern mathematics such as Fibionacci series, Pascals Probability theory and even Newtons Calculus! “The concept of Zero unleashed something more profound than just an enhanced method of counting and calculating”. Zero revolutionized the old modes of human thought. It meant firstly people could use only ten digits, from 0 to 9, to perform every conceivable calculation and to write any conceivable number. Secondly, it opened up a whole new world of possibilities for abstract human thinking that had been simply unthinkable before!

How did the ancient Hindus discover such a powerful concept as “sunya” while the rest of the world remained ignorant of “Zero” for ages?

To grasp the concept of “sunya” required a very high level of intellectual and spiritual advancement as what prevailed in India during and after the Vedic period. As the English philosopher, A.N.Whitehead wrote: “The point about zero is that we do not need to use it in the operations of daily life. No one goes out to buy zero fish or eggs. (But) It is in a way the most civilized of all the cardinals, and its use is only forced on us by the needs of cultivated modes of thought”. Vedic mathematics and astronomy of those ancient times clearly bear evidence to the highly sophisticated conceptual and ideological skills that our Indian forbears possessed. There was no doubt at all that the ancient Vedic Indians who gave to the whole world the idea of “sunya” were indeed masters of the most civilized and “cultivated modes of thought”.

There was a great mathematician in India who lived in the 10th century CE, He was Bhaskaracharya. He wrote several pioneering treatises (in Sanskrit) on Vedic mathematics. In one of the treatises, it is said, he wrote a small dedication: “To the Supreme Brahman, who is Infinity, I offer my salutation”. Bhaskaracharya used the Sanskrit word “khahara” to denote God as “Infinity” in the dedication. It is derived from “kham” which means “Zero” and “hara” meaning “divided”. The word “khahara” was meant to indicate that God who is Infinity is related to Zero.

Bhaskaracharya was the first mathematician to reveal to the world the intimate relationship between “sunya” and “ananthaha”, between Zero and Infinity. Any quantity divided by “sunya” is equal to Infinity, he said. Take a value like 16 and divide it (“haraha”) with progressively decreasing divisors. What happens? The quotient progressively enlarges. For e.g. 16 divided by 4 = 4; and 16 divided by 2 = 8; and eventually when 16 is divided by 0 it equals “Infinity!” Every quantity, every value in the world, when divided by “sunya”, results in the same quotient or result viz. Infinity, “ananthaha”

Such is the mighty power of Zero that it can raise and relate all values on earth to the exalted state of Infinity – that very same state in which God Almighty, the Vishnu of the sacred “Sahasranama”, is said to eternally reside and rule!

Spiritual side of fierce Goddess Bhairavi, the Goddess of wisdom
Saying ‘I am a Hindu’ should be respected
Comment