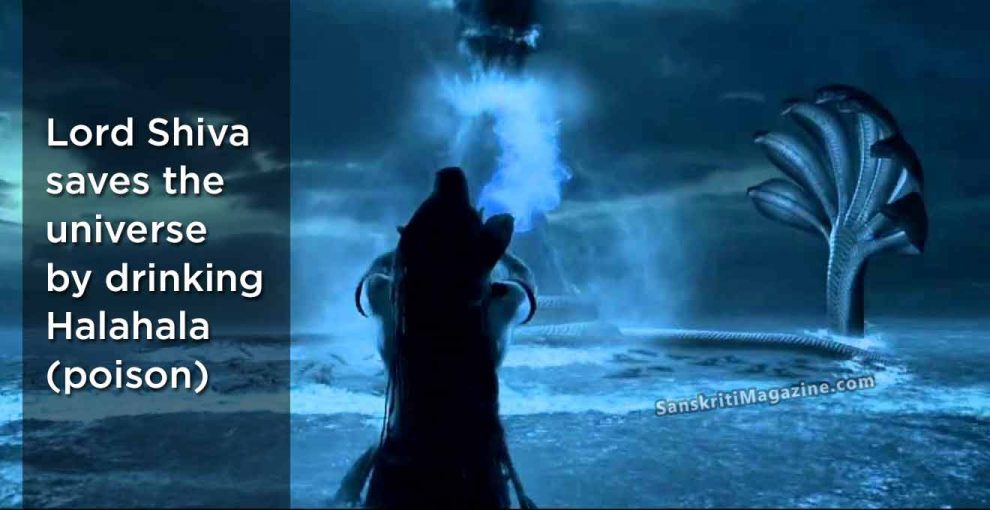 During the churning of the ocean, however, the first thing that came out was a dangerous poison called halahala. When that poison was spreading in all directions, all the demigods, along with Lord Vishnu, approached Lord Shiva. Srila Madhvacarya explains that Lord Vishnu was competent to rectify the situation, but in order to glorify Lord Shiva, Lord Vishnu did not take action. The demigods observed Lord Shiva sitting on the summit of Kailasa Hill with his wife, Bhavani, for the auspicious development of the three worlds. Great saintly persons desiring liberation were worshiping him. Offering prayers and obeisances with great respect, the demigods requested Lord Shiva to save them from the great calamity. 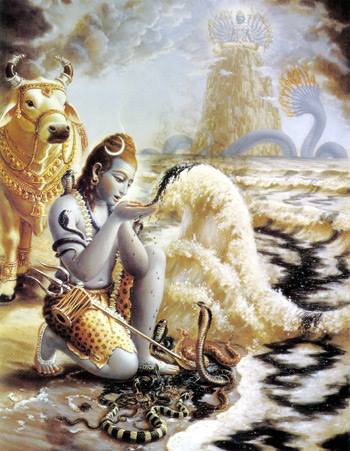 Seeing the distress of the demigods, Lord Shiva felt very compassionate, and he considered it as his duty to save all living entities from this dangerous poison. With his great power, he then reduced that great quantity of poison to a small quantity, held it in his palm and drank it. The poison marked Lord Shiva’s neck with a bluish line, which is now accepted as an ornament of the Lord. Since then he became known as nilakantha, or blue-throated.

The sixth canto of the Srimad-Bhagavatam describes the pastime of King Citraketu who had the great fortune of meeting with the Supreme Personality of Godhead. Once, while King Citraketu was traveling in outer space on an airplane given to him by Lord Vishnu , he saw Lord Shiva sitting in an assembly of great saintly persons and embracing Parvati who was sitting on his lap. Citraketu laughed loudly and expressed his wonder at Lord Shiva’s action. When Parvati heard this, she became extremely angry and cursed Citraketu to become the demon Vrtrasura.

Srila Visvanatha Cakravarti Thakura explains how Citraketu did not offend Lord Shiva but was actually appreciating Lord Siva’s exalted position of remaining unaffected even while Parvati was on his lap. Citraketu addressed Lord Siva as maha-vrata-dharah which indicates a brahmacari who has never fallen from his positon.

Lord Shiva’s response to Citraketu’s remark also brings out his greatness. Citraketu feared that common people might become offenders at the feet of Lord Shiva by criticizing Shiva’s external behavior without understanding his purity. That’s why he laughed and criticized Lord Siva in the open assembly. Lord Siva, who is always deep in knowledge, could understand Citraketu’s purpose, and therefore he was not at all angry; rather, he simply smiled and remained silent. But Parvati could not tolerate Citraketu’s remark, and therefore she cursed him to become a demon. Citraketu, however, accepted the curse with folded palms as the will of the Supreme Personality of Godhead and went away. Lord Siva, seeing this extraordinary behavior of Citraketu, glorified Vishnu-bhaktas and the process of devotional service. He said,

“Devotees solely engaged in the devotional service of the Supreme Personality of Godhead, Narayana, never fear any condition of life. For them the heavenly planets, liberation and the hellish planets are all the same, for such devotees are interested only in the service of the Lord”(Bhag. 6.17.28). He explained to Parvati how this material world is a place of duality, and how devotees have learned to tolerate these dualities and have become transcendental to them. Persons engaged in devotional service to Lord Vasudeva, Krsna, have naturally perfect knowledge and detachment from this material world. Therefore such devotees are least affected by the so-called happiness and distress of this world.

Lord Shiva’s Instructions to the PracetAs

Lord Shiva’s instructions to the Pracetas are one of the most valuable discussions appearing in the Srimad-Bhagavatam.

Pracetas were the sons of King Pracinabarhi. When they were ordered by their father to marry and beget children, they all entered the ocean and practiced austerities and penances for ten thousand years. Thus they worshiped the master of all austerity, the Supreme Personality of Godhead. When all the sons of Pracinabarhi left home to execute austerities, they met Lord Shiva, who, out of great mercy, instructed them about the Absolute Truth. All the sons of Pracinabarhi meditated upon the instructions, chanting and worshiping them with great care and attention. 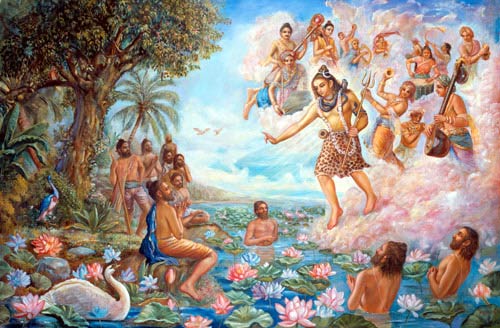 Lord Shiva said to the Pracetas, “Any person who is surrendered to the Supreme Personality of Godhead, Krsna, the controller of everything material nature as well as the living entity is actually very dear to me. You are all devotees of the Lord, and as such I appreciate that you are as respectable as the Supreme Personality of Godhead Himself. I know in this way that the devotees also respect me and that I am dear to them. Thus no one can be as dear to the devotees as I am.”

Then Lord Shiva gave the Pracetas a mantra consisting of a series of verses glorifying the Supreme Personality of Godhead, Vishnu. The Pracetas chanted that mantra and attained the perfection of life. 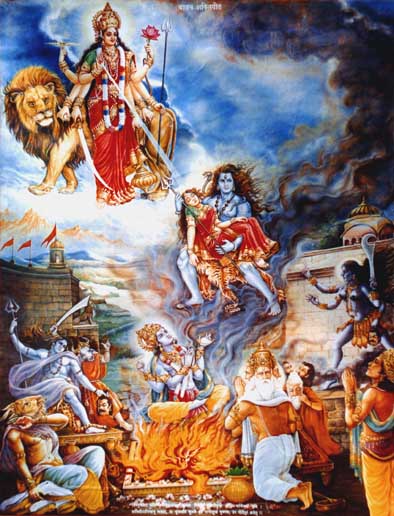 The leaders of the universal creation, namely Marici, Daksa and Vasistha, once performed a great sacrifice, and great demigods assembled for this sacrifice along with their followers. When Daksa, the leader of the Prajapatis (progenitors) entered the assembly, everyone stood up in great respect, except Lord Brahma and Lord Shiva. Lord Brahma was the father of Daksa, so Daksa didn’t take offense to it. Lord Shiva, however, was Daksa’s son-in-law, and therefore he considered Lord Shiva’s remaining seated as a great insult against him. Infuriated, he blasphemed and cursed Lord Shiva and denied his share of sacrificial oblations. A series of curses and counter-curses followed from the members of each party, and the whole event was completely spoiled.

During Daksa’s outburst against Lord Shiva, he called him yaso-ghna and nirapatrapah, which meant “one who spoils name and fame” and “one who is stunted” respectively. Srila Prabhupada explains how these words can be interpreted in a different way that brings out Lord Shiva’s greatness. Yaso-ghna can also mean that he was so famous that his fame killed all other fame. And nirapatrapa can mean “one who is the maintainer of persons who have no other shelter.” Lord Shiva generally gives shelter to bhutas (lower grade of living creatures) who cannot approach Lord Vishnu. Therefore the use of the word nirapatrapa is quite appropriate.

Daksa criticized Lord Shiva by saying that he lives in filthy places like crematoriums, and his companions are the ghosts and demons. He roams naked like a madman with ashes smeared all over him. He remains unclean and decorates himself with skulls and bones. All these are highly inauspicious, and therefore he is very dear to crazy beings, who are in the mode of ignorance.

During the whole episode of cursing and counter-cursing, Lord Shiva did not curse Daksa, despite having the ability to do so. He remained silent and tolerated everything. This portrays Lord Shiva’s excellent character. Because he is the greatest Vaisnava he was completely sober and tolerant. He became morose because he knew that these people, both his men and Daksa’s, were uninterested in spiritual life. From his point of view, he saw everyone equally, because he is a Vaisnava. As stated in Bhagavad-gita (5.18), panditah sama-darsinah: one who is perfectly learned does not see anyone as lesser or greater, because he sees everyone from the spiritual platform. Thus the only alternative left to Lord Siva was to leave in order to stop his follower, Nandisvara, as well as Bhrgu Muni, who sided with Daksa, from cursing each other. — with Srilan Srisukumaran.