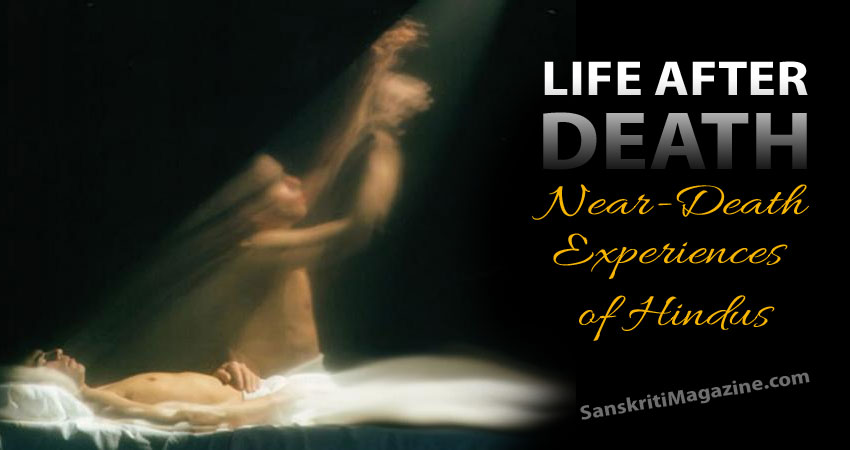 In 1986, researchers Dr. Satwant Pasricha and Dr. Ian Stevenson documented 16 cases of near-death experiences in the Journal of the American Society of Psychical Research.  Profiled below are some of the Hindu cases from their research on near-death experience in India:

Vasudev Pandey was born in 1921 and nearly died when he was about 10 years old due to a “paratyphoid disease”.  Confirmed to be dead, his body was prepared for cremation but some indication of life was noticed and he was brought back to the hospital where doctors successfully revived him.

Vasudev remained unconscious for 3 days and upon gaining consciousness, related the following experience:

Two persons caught me and took me with them. I felt tired after walking some distance; they started to drag me. My feet became useless. There was a man sitting up. He looked dreadful and was all black. He was not wearing any clothes. He said in a rage to the attendants [who brought Vasudev there]:

“I had asked you to bring Vasudev the gardener. Our garden is drying up. You have brought Vasudev the student.”

When I regained consciousness, Vasudev the gardener was standing in front of me [apparently in the crowd of family and servants who had gathered around the bed of the ostensibly dead Vasudev]. He was hale and hearty. People started teasing him saying, “Now it is your turn.” He seemed to sleep well in the night, but the next morning he was dead.”

In reply to questions about details, Vasudev said that the “black man” had a club and used foul language. Vasudev identified him as Yamraj, the Hindu god of the dead. He said that he was “brought back” by the same two men who had taken him to Yamraj in the first place. Vasudev’s mother, who died before the time of the interview, was a pious woman who read scriptures which included descriptions of Yamraj. Vasudev, even as a boy before his near-death experience, was quite familiar with Yamraj.

Durga Jatav became ill with typhoid at the age of 20 and was bedridden for several weeks.  When his body became cold for a few hours, his family thought that he had died.  He gained consciousness however, and on the third day narrated the following experience:

Durga had been taken to another place by 10 people.  When he tried to escape, they cut off his legs at the knees to prevent his escape.  He was taken to a place with about 50 people sitting around at tables and chairs but he did not recognize anyone.

These people looked at his “papers” and noticed that his name was not on their list, and said, “Why have you brought him here?  Take him back.”

To this Durga replied, “How can I go back?  I don’t have any legs”

He was shown several pairs of legs from which he recognized his own and they were reattached somehow.  He was then sent back with the instructions to “not stretch” his knees so his legs could mend.

A few days after Durga became conscious, marks on his knees were noticed which were not there prior to his illness.  These marks were still visible on his skin 30 years later when he was interviewed.  There was no bleeding or pain and x-ray photos revealed no abnormality below the surface of the skin.

For Durga, this experience seemed like a dream but it strengthened his faith in God.

The headman of his village stated that during the time of Durga’s experience, another person with the same name had died in Agra about 30 kms away.

Chhajju Bania was 32 years old when he became ill with fever and was believed to have died.  However, he revived and gave the following account of his near-death experience:

Four black messengers came and held me.  I asked, “Where are you taking me?”

They took me and seated me near the god. My body had become small. There was an old lady sitting there. She had a pen in her hand, and the clerks had a heap of books in front of them.

One of the clerks said, “We don’t need Chhajju Bania [the trader]. We had asked for Chhajju Kumhar [the potter]. Push him back and bring the other man. He [meaning Chhajju Bania] has some life remaining.”

I asked the clerks to give me some work to do, but not to send me back. Yamraj was there sitting on a high chair with a white beard and wearing yellow clothes. He asked me, “What do you want?”

I told him that I wanted to stay there.

He asked me to extend my hand. I don’t remember whether he gave me something or not.

Then I was pushed down [and revived].

Chhajju mentioned that he later learned that a man by the name of Chhajju Kumhar had died at the same time he regained consciousness.  This experienced changed Chhajju’s outlook on life, especially in the direction of his becoming more honest.

Mangal Singh’s near-death experience differs from the ones above in the fact that he was not ill or never considered himself to be at the brink of death.  He was approximately 72 years old when he had the following experience:

I was lying down on a cot when two people came, lifted me up, and took me along.

I heard a hissing sound, but I couldn’t see anything. Then I came to a gate. There was grass, and the ground seemed to be sloping.

The two men [who had brought Mangal] ran away, and the senior man said, “You go back.”

Suddenly I saw two big pots of boiling water, although there was no fire, no firewood, and no fireplace.

Then the man pushed me with his hand and said, “You had better hurry up and go back.”

When he touched me, I suddenly became aware of how hot his hand was. Then I realized why the pots were boiling. The heat was coming from his hands.

Suddenly I regained consciousness, and I had a severe burning sensation in my left arm.

The area on his arm developed a boil which was shown to a doctor and an ointment was prescribed.  This area healed within 3 days but left a residual mark on the arm.

Mangal believed he was sleeping at the time of the experience but could not confirm this.  He later found out that another person had died in the locality around the same time of his experience but he never made any inquiries into this death.

A comparison of Hindu near-death experiences with western accounts reveals the following:

The Nagas of Ancient India
Significance of Symbols
Comment