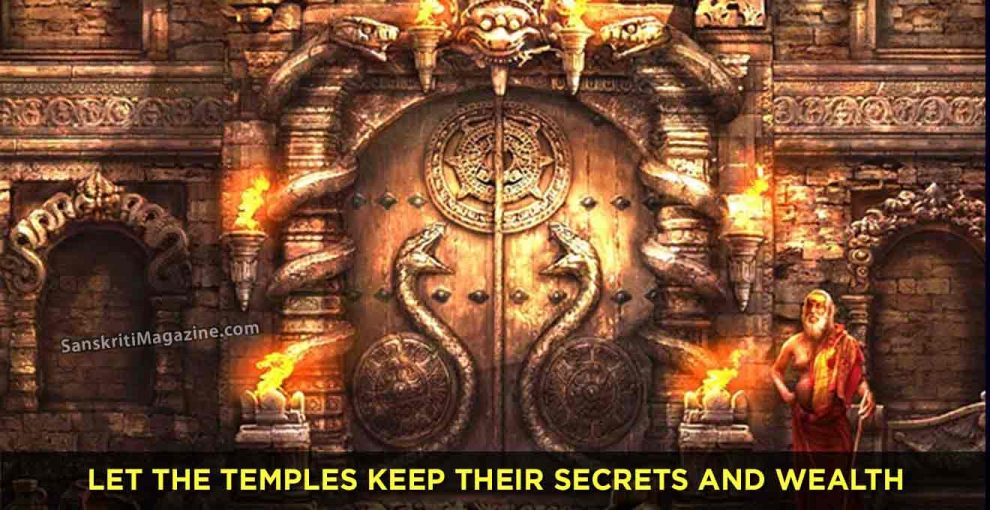 Ancient temples received riches beyond imagination from wealthy kings. Sadly, most of it has been lost, and of what remains none retains its original form. Perhaps it is better if some secrets are never revealed.

I am not on the cocktail circuit but if I was, I would have a great story on something that is a hot topic now – exploring temple vaults. A decade back, when the renovation of a Vishnu temple on the Thamirabarani banks was happening, I had a chance to see the subterranean vault. The strong room had just had new metal doors fixed and a thick plank was slowly moved for a few steps that went underneath. The chamber was small — perhaps 6 by 6 feet and enough room for someone to couch. There was nothing there save two old ceramic jars. If only their mouths could talk… I didn’t wait to listen, the heat, the smell was unbearable.

This temple received several gifts in the 13th century, none of which have survived. Imagination is our only key in most cases. Epigraphs also help. The Indian tradition of recording on stone is ancient, even from the time of Ashoka (2nd C BC). Successive invasions destroyed them in the North but the South, especially Kerala and Tamil Nadu, fared better. Kerala’s weather and land-holding patterns caused their temples to be small and compact whereas Tamil Nadu’s temples became apogees of wealth with the God-King connects. In fact, even the Padmanabha temple is predominantly Tamil in construction than traditional Kerala. Temples in Karnataka and Andhra Pradesh fared worse post the decline of the Vijayanagara Empire to Muslim rulers.

What would be the next temple on the list? Do all temples have such fabulous vaults? The answers would make great novels and films but the truth is sadly more prosaic. The wealthiest temple in Karnataka for all times stands a desolate, destroyed shell today – the Vittala Temple at Hampi, once rumored to have several gold images and many more jewels mostly from Krishnadevaraya’s conquests. Temples in the state administered by pontiffs and run by monasteries may be in a better state. In times when charismatic pontiffs administered the temple, gifts would have poured in.

Kalahasti and Tirupati put Andhra Pradesh on the map. The earliest gift to the latter, it is believed, is a small Silver/Gold idol by a Pallava Queen. Much of the temple’s wealth is probably from devotees today but I wonder if it still has untouched the jewels Krishnadeva Raya (1509 – 1529) gave to a long list of temples, including (from the Rayavachakamu), “heaps of jewels made with the nine gems”. However, by any estimate, the worth of jewels that have been given to the Tirupati temple by present generation devotees probably far outweigh the past!

Kerala’s temples, due to a more tantric form of worship, have smaller principal deities and very simple, small processional deities. The connection between king and God, palace and temple is strongest in Tamil Nadu. Processional images became indicators of wealth since they moved out of the temple precincts and displayed the wealth and therefore the power of the temple to the society at large. The tradition of the Travancore kings ruling on behalf of God is an old practice but their personal humility probably less emulated by other kings. The nature of the idol in the Padmanabha temple and the temple’s proximity to Tamil Nadu make it different. Sabarimala and Guruvayoor are wealthy temples, but much of it would be from the 20{+t}{+h} century or later due to public patronage.

Last but not the least is Tamil Nadu where the link between kings and temples was the closest. Despite invasions from the 16th century, individual temple wealth is still immense. The Madurai Meenakshi Amman temple, Andal temple (Srivilliputtur) and the Azhagar temple hopefully still have the many gifts Krishnadevaraya showered upon them, diamond earrings, brooches with lapis lazuli, nose rings, ruby studded waistbands, gold anklets, and image frames crowned by yalis inset with navaratna. To Ramasewaram temple, he gave three times his weight in gold among other gifts. Do they still survive is an important question and in the same form, an even more pertinent one. The bronze arch he gave to the Madurai temple was destroyed during renovation in the 1970s and the fate of the jewels can only be guessed. Old guide books to some temples even speak of them having statues of solid gold.

Srirangam, the most sacred among Vishnu temples, received gifts from several kings. Among them was Jatavarman Sundara Pandya I (1251-1268) who is in the temple annals known as “Hemachandra Raja” or “the king (Perumal) who covered the temple with gold”. Among his gifts include an image of Anantha, a prabhavali (the eliptical structure behind the image), a processional car, a kavacham, vessels and Kalasa, a pedestal, a makaratorana (to shelter Ranga), an image of Garuda — all cast in solid gold! He also gave an emerald necklace, a prized possession in the treasury of Orissa’s Kataka (Cuttack) Raja, a crown of jewels, a mandapa of pearls, and covered the vimana and the wall of the second enclosure with gold.

The Brihadeswara temple today has nothing of the gifts made by Raja Raja (many of them came from his sack of the Kerala kingdom). Inscriptions list out more than 17 kinds of diamonds and equal numbers of pearls and several other jewels, all of which have been lost. Several inscriptions even from lesser- known temples frequently talk of gold vessels and jewels. Temples like those in Tiruvottriyur in Chennai even had gold-plated doors funded by merchants. None of these survive today in their original form. Many secret chambers have come to light, some with ingenious constructions that let in light and air with the secret guarded by conscientious elders. They were empty or had bronzes and copper plates. Such temples include Madambakkam, Nallur, Gangaikondan etc. At a time when temples functioned as banks (charging interests of as high as 32.5 per cent) such vaults were essential.

However, before treasure hunters target these temples, they need to be warned. For many decades, unscrupulous elements of society have taken advantage of depopulated villages to either outright steal temple jewellery (e.g. the burglaries in Kanchi and Tentiruperai) or have copies replace originals (for jewels, paintings, lamps etc.).

Perhaps we should let temples guard their secrets and probe into those of Indians who have bigger riches illegally stashed away abroad. The greatest loss has not been the wealth but the growing ability of a devoted temple worshipper to unflinchingly commit dishonest deeds in contravention of the very basic rule of religion that enjoins us to strive to be better people. That has indeed been our inestimable loss.