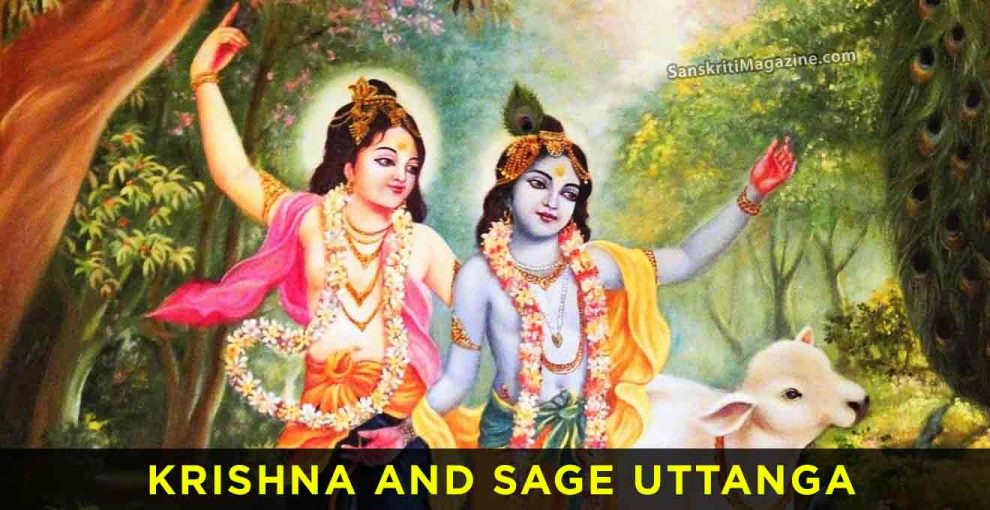 After the great war of Mahabharatha was over, Lord Krishna was traveling back home. On his way back, he passed a barren desert. He waited there for the night. There in the barren desert he saw a Sage named Uttanga. Uttanga was a great devotee of Lord Krishna. He spent most of his time in meditation and did not know much about what happened in the outer world…

Uttanga saw Krishna camping the desert and was thrilled to meet him. Uttanga fell at Krishna’s feet and worshiped Krishna. Krishna picked up Uttanga lovingly and embraced him. ‘My friend! What are you doing here?’ Krishna asked Uttanga. Uttanga smiled and shook his head. ‘Just meditating, my Lord! The question is what are you doing here?’

Krishna thought for a few seconds and then spoke, ‘A great war was just over! We just finished the Kurushektra war, my friend! I am now going back home…now that my work there is done…’

Uttanga blinked…A war? Krishna could not stop a war? Uttanga fumbled, ‘But my Lord! A war? A war would have caused so much bloodshed….Why would you even allow such a war to happen?

Krishna sadly nodded his head, ‘This war was responsible for many people to lose their lives…But it was necessary…’

Uttanga said surprised ‘You are saying that a war is necessary?’ Uttanga looked disgusted as he continued, ‘this war has created so much misery and loss…Did you do nothing to stop the war Krishna?’ Uttanga became more and more angry, as he spoke. In anger he pulled out the water from his Kamandalam and held it in his hands and said, ‘If that is true Krishna…then I am going to curse you…’

Krishna looked at Uttanga and smilingly shook his head. Gandhari’s [the mother of the Kauravas] curse already hung on his head. He had accepted that curse willingly….He did not need another person who did not understand him…He had to make Uttanga understand, ‘Uttanga! I did everything in my power to stop the war…I went and pleaded with Duryodhana [the eldest Kaurava] to make peace with Pandavas…I said that he did not even have to give back the Pandavas the whole of the kingdom that they had lost….I was even ready to accept five villages – one each for each of the five Pandavas…’

Uttanga looked surprised as Krishna continued, ‘Yes! I actually pleaded with Duryodhana to give five villages, one for each of the five Pandavas…and do you know what Duryodhana said?’ Krishna said with pain filled eyes. Uttanga questioningly raised his eyebrows as Krishna continued, ‘Duryodhana said he would not give even the space to occupy a needle to the Pandavas…He said he was willing to fight for it…It was his….’

Uttanga felt a little silly with the water in his hands as Krishna continued, ‘Besides Uttanga, the Kauravas humiliated the Pandavas and Draupadi[the wife of the Pandavas]…Such cruelty could not be forgiven…And so…’ Krishna said taking a deep breath, ‘…the war was fought…’

Uttanga dropped the water uselessly on the floor and looked at Krishna with tears in his eyes, ‘I am sorry I doubted you, Krishna…’ He looked down looking shamefaced, ‘I am sorry I was about to curse you for something you were not responsible…’

Krishna shook his head. He ordered his guards to prepare lunch for the sage. The sage enjoyed Krishna’s hospitality for some time. The next day, as Krishna left for his kingdom, Krishna spoke to Uttanga, ‘Uttanga! I know that when you heard my story yesterday you were about to curse me…you transferred some energy to the water in your Kamadalam…It was wasted…Your powers were wasted…I wish to make up for it…Please ask for anything from me, I will grant you any boon you want…’

Uttanga shook his head, ‘I need nothing Krishna…I am an ascetic…I am devoted to you…I can see you whenever I want…What more could I want….’

Uttanga thought for some time. Krishna did not give his word normally to everyone…Krishna expected him to use the boon carefully…He looked at the place where his water had spilt and suddenly smiled, He looked at Krishna, ‘Krishna! I lost some water on that day right? So that is what I ask from you…Water…If I ever feel thirsty, you have to make sure that my thirst is quenched….’

In the desert Uttanga sat meditating on the Dark Lord. Once as Uttanga had finished his meditation, he felt very thirsty. He looked around and saw no water. Krishna! He thought as he closed his eyes.

When Uttanga opened his eyes, standing before him was a hunter with his dogs, dressed in rags looking dirty and filthy. The hunter was panting as if he had run a long way. The hunter took out the water from a pouch in his belt and took a sip. The hunter looked at Uttanga and said, ‘Sir! You look like you are thirsty….Want some water?’ The hunter said gruffly handing over the dirty pouch to Uttanga. Uttanga wrinkled his nose. The stench coming from the man was unbearable…The water that the man was drinking was probably dirty. Uttanga stepped back and shook his head, ‘I don’t want anything…Go away from me…’ 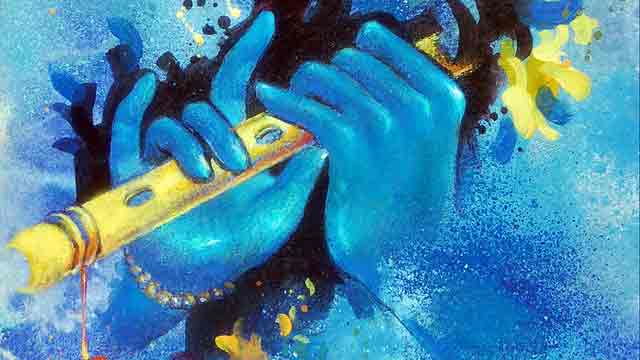 The hunter looked amused, ‘Sir! You actually look thirsty…I saw you lick your lips, when I was drinking water…I filled the water from a river near my house…It is very clear and pure…’

Uttanga wanted to just get away from the dirty man and his dogs, who were sniffing him, ‘Go away now!’ He said angrily and slightly nervous looking at the dogs.

The hunter tried again, ‘Sir! You won’t find a lot of water here…’ The hunter said pointing at the desert around him, ‘…Please sir…take some water…’

Uttanga looked angrily at the hunter and said, ‘I would rather die thirsty then to drink water from a dirty man like you…go away!’

The hunter gave a sad smile and went away from there…Uttanga was angry and still walking with no water…Krishna, your broke your promise…How dare you…

Standing before Uttanga with a very sad smile was the Dark Lord, who suddenly appeared before him. Uttanga angrily looked at Krishna ‘Is this a way to repay a boon…I thought you said I would get water, whenever I was thirsty…My thirst is almost killing me…and what?’ Uttanga said angrily waving his hands, ‘No water?’ He said looking scornfully at Krishna.

Krishna did not say anything while Uttanga was ranting. Finally Uttanga looked exhausted then Krishna spoke quietly, ‘You are right, Uttanga…I did not give you water…I was going to give you nectar of immortality…amrita of the Gods….’

Uttanga looked stunned as Krishna continued, ‘Indra, the God of the Devas has the nectar of immortality with him…I asked him to give that to you…’ Uttanga looked stunned as Krishna sadly continued speaking, ‘Indra agreed to give you the amrita, but he imposed a condition. Indra said that it was after all Amrita …only a person who truly deserved it should be given it….Indra said that he would first test you and if you passed the test, he would give the amrita to you…’

Krishna pointed at the direction of the hunter, ‘The hunter was actually Indra…He had amrita in his pouch…He wanted to see whether you saw the Paramatma [the Force which runs within us all…] in all the people…’ Krishna sadly shook his head, ‘You could not see that all people are equal, Uttanga…’ Uttanga looked too shamefaced and bowed down, his thirst forgotten, ‘Despite all your meditation and prayers, you still do not realize that everything is one and the same and all are equal…I am sorry Uttanga…’ The Dark Lord said turning away, ‘You still have a lot of learn about Love and the Paramatma…’

The Dark Lord handed some plain water to Uttanga who was now not in a mood to drink it. Uttanga just went away and promised to himself that he would become a better person and try to see everyone equally no matter who they are… — with Srilan Srisukumaran.