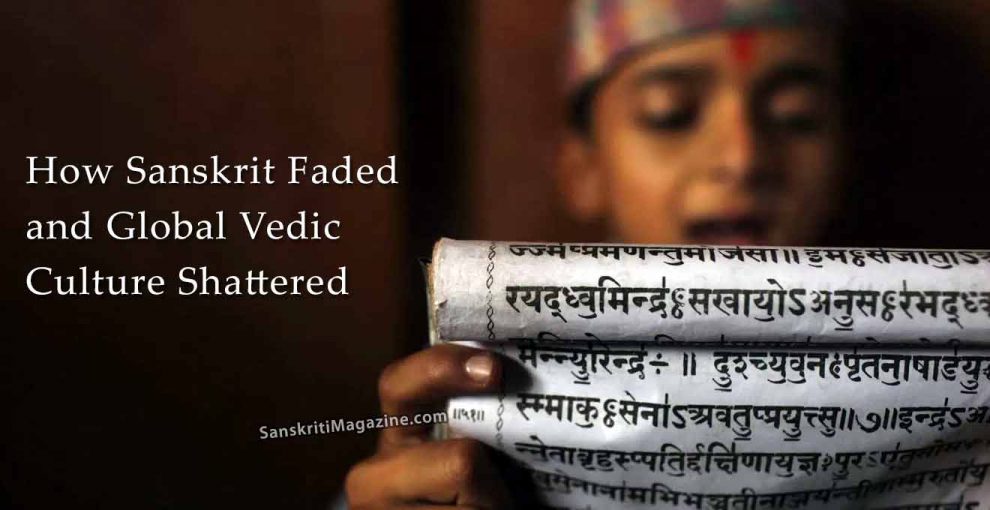 Sanskrit was an internationally known language even up to the time of the 15th century. This corroborated by a footnote on page 28, Volume One, of Marco Polo’s Memoirs. It is explains that in the village of Kenyung Kwan, 40 miles north of Peking, beyond the pass of Nankau, under an archway, two large inscriptions were engraved in 1345 CE in six languages, including Tibetian, Mongol, Baspath, Uighur, Chinese, one unknown language, and Sanskrit. Furthermore, another footnote on page 29 of the same volume explains that the annals of the Ming dynasty in 1407 CE mentions the establishment of linguistic office for diplomatic purposes. This required the study of eight languages, including Sanskrit.

So, Sanskrit was an important language. We can see that the farther we go back in time the wider and more frequent was its use. With so many languages displaying words that derive from Sanskrit, or are corrupted forms of it, we can understand that Sanskrit was the primary language from time immemorial up to the era of the Mahabharata War. So why did Sanskrit go from a global language to one that is presently sparsely used?

It would seems that the Mahabharata War at Kuruksetra caused the global, united Vedic administration to break up into factions and fragments. The war caused many once united portions of world society to take sides to either support the Pandavas or the Kurus. As explained in the Mausal Parva section of the Mahabharata, after the heavy carnage of the war, masses of people had to flee the area or take refuge in new and unfamiliar areas of the world. This caused the breakdown of the world-wide Vedic social, educational, and administrative system which helped usher in the chaos of the age of Kali-yuga.

As people fled to other areas of the world and splintered away from Vedic society, they, nonetheless, carried with them remnants and memories of the Vedic rituals and customs, as well as speech and language they once knew and practiced. However, bereft of the formal style of Vedic administration, and the educational system that accompanied it, after many generations of this, the forgetfulness if the ancient ways led them to speak in progressively more distorted forms of Sanskrit and develop their owb peculiar regional forms of speech, customs, and mannerisms. Therefore, people in the British Isles, the Mediterranean, China, Japan, etc., all evolved their own style of vocabulary and remnants of Vedic customs. This is how various forms of Sanskrit, and why languages and customs and religions have a thread of similaries running through them. The idea of some scholars that Sanskrit, latin, and Greek are descendants of some previous language in unfounded and simply speculations.

With the dispersal of large masses of people there was the formation of regional states that became isolated and divided, which took the shape of Syria, Assyria, Babylonia, Mesopotamia, Egypt , China, etc. Mr.P.N.Oak provides an interesting explanation in this regard in his book, Some Missing Chapters of World History (p.8): “Like the Vedic society too broke into diverse cults and communities. Consequently their names are all Vedic Sanskrit. Thus, Syria is Sur, Assyria is Asur, Babylonia is Bahubalaniya, Mesopotamia is Mahishipattaniya, etc., while Stoics were Staviks (people given to meditation), Essenes were devotees of Essan (Lord Shiva), Samaritans were Smartas (those whose lives were regulated by the Smiriti Vedic tests), Saddhuceans were the Sadhujans (monks), Malencians were Mlencchas, Philistines were followers of the Vedic sage Pulasti, Casseopeans were followers of sage Kashyap, etc.”

This is why so many of the Vedic symbols, or distortions of such, are still important or highly recognized in various parts of the world. For example, The Aryan symbol of the Swastika is a famous sign for auspiciousness and good luck, which was later distorted in to a symbol of a different meaning by Hitler and the German army. The Shakti-Chakra or Sri Yantra was held sacred and turned into the six-pointed Star of Solomon by the Jewish people.

Furthermore, we can easily wee the many similarities in ancient architecture all over the world. The Vedic culture was not interested in conquering foreign people into submission, but was interested in upgrading people everywhere. Thus, they also spread the ancient science of constructing buildings. Many of the ancient temples and stone mansions we find today are built to specifications of the Vedic Shilpa Shastras. The reason for the similarities in buildings of the Indians, Iranians, Arabs, Mongols, and even in the Americas is in this way.

One western author who also reached this conclusion is E.B.Havell. In his book, Indian Architecture-Its psychology, Structure and History (pp.1&2), he writes that all historic architecture is absolutely Hindu (Vedic) in style, concept, and execution. Havell also wrote about the false idea that the beauty and precision of Indian building art must have come from outside India. “All these misconceptions have their root in one fixed idea. The belief that true aesthetic feeling has always been wanting in the Hindu mind and that everything really great in Indian art has been suggested or introduced by foreigners… This persistent habit of looking outside of India for origins of Indian art must necessarily lead to false conclusions.”

Interestingly, the principles of Vedic architecture can be found a lot closer to home than many people may think. P.N.Oak describes in World Vedic Heritage (p.390) that the White house in Washington D.C also follows the principles of Vedic architectural design. In the age old tradition, the king’s palace was designated as the Dhavala Gruha, which literally translates into White House. The designs for such a house is described in two famous Sanskrit Classics, The Harsha Charita and Kadambari. Both texts were written by Sanskrit pundit Banabhatta 1300 years ago during the reign of King Harshavardhan. “The traditional Vedic features enjoined for the Hindu Chief Executive’s Chaval Gruha have been reflected in every details in the White House in Washington D.C . and the U.S.Embassy building in New Delhi.”

So, why can we not remember or find more sources of documented history of our connection with a global Vedic culture? Why do most histories of any country tend to fade out after going back 2500 years? There are several reasons, some of which we will mention later. But one reason is that before the process of fragmentation began after the Mahabharata War at Kurukshetra in 3138 BCE, all regions of the world had not developed a separate identity from the global Vedic Aryan culture. Thus, there was not a need to record a separate regional history other than what was already recorded as a global history, as we presently find in many of the ancient Vedic histories known as the Itihasas, or Puranas. This is one of the reasons why most regional histories tend not to go back farther in time then 2500 to 3000 years ago. Even the longest regional histories hardly go back farther than 3000 BCE, the time of the Mahabharata War.