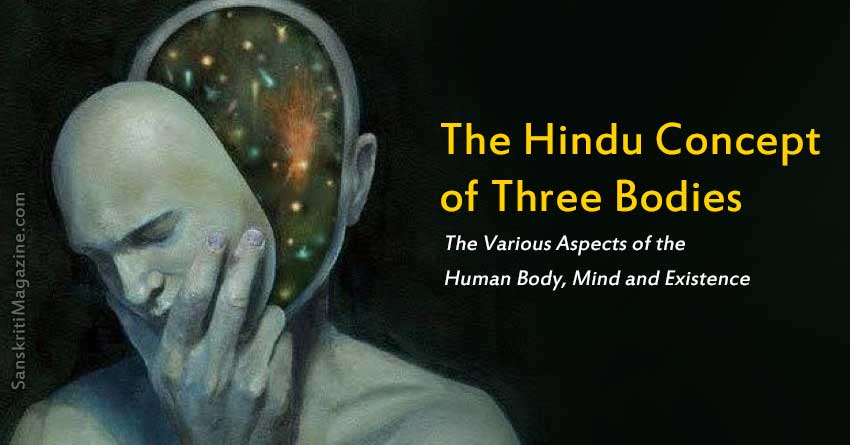 Ancient Indians realized the importance of understanding the external and internal compositions of the human body in order to study the subjective world within us. According to Hindu scriptures, human beings have 3 bodies, 5 sheaths or layers, and 3 states of existence.

It aims to control the vital energies of our body – physical, mental, intellectual and spiritual – and helps human beings attain siddhi or magical power and moksha or the transcendent state attained as a result of being released from the cycle of rebirth.

In this article, we look at the three perspectives that constitute human beings as a whole.

Let us first study and analyze the three types of bodies that compose a human being:

This is the mortal, material body that acts – eats food for sustenance, breathes and moves. It is composed of five primordial subtle elements which have undergone panchikarana or the Vedantic process of how subtle matter can transform into gross matter. The 5 constituent elements are: Ether, Air, Water, Fire and Earth. In this physical state, the body comes into contact with the external world. So, the ‘Sthula Sarira’ is called anatman as it is corporal or non-spiritual.

The 3 main features of the ‘Sthula Sarira’ are Sambhava (birth), Jara (old age) and Maranam (death).

This body is determined by the results of past actions. It has the capacity to experience joy and sorrow and also form the basis of earthly relationships. At death, this physical body perishes and its 5 basic elements are dissolved. 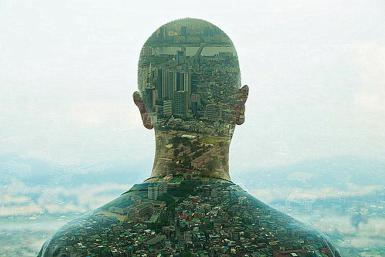 2. The Subtle Body or ‘Suksma Sarira’:

This body of vital energies keep the physical body alive. This is also made up of the five basic elements: Ether, Air, Water, Fire and Earth that produce the physical body. But these have not yet undergone the panchikarana process and acts like a storage of thoughts and memories.

It continues to exist after death and serves as a vehicle of reincarnation. This body comprises:

3. The Causal Body or ‘Karana Sarira’:

This form of the body is a combination of the gross and the subtle bodies as it compels the soul to take another birth and has an undifferentiated form or nirvikalpa rupam. It is inexplicable and originates due to avidhya or ignorance of the real identity of the atman or soul. As such, the causal body is characterized by emptiness, ignorance and darkness. This is the most complex of the three bodies and it contains the impressions of past experience. This is not the atman, as it has a beginning and an end and is subject to modification.

The 5 Layers of the Human Body & Mind 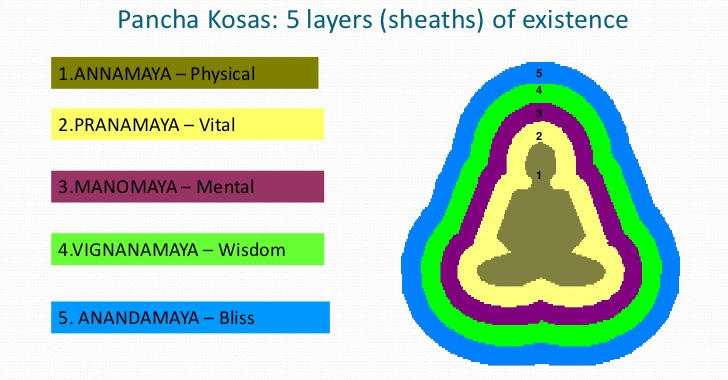 According to the Hindu scriptures, the body-mind complex of man is described as consisting of five sheaths, or layers. They are as follows:

1. The physical sheath or food sheath (Annamaya Kosa): The physical body that needs food for sustenance and lasts till it can absorb food.
2. The prana or the vital-air sheath (Pranamaya Kosa): This animates the gross body, makes it to inhale and exhale, move about, take in nourishment, excrete and reproduce.
3. The mental sheath (Manomaya Kosa): This helps to experience pleasure and pain, gives rise to desires and is subject to change.
4. The intellectual sheath (Vijnanamaya Kosa): This reflects the light of the self .It is the cause of embodiment. It helps to judge and discriminate.
5. The sheath of bliss (Anandamaya Kosa): It is the state of pleasure and rest, though this is material and subject to change.

The 3 States of Our Existence

The Upanishads talk of these three states of existence that a human being experiences:

Waking, dream and deep sleep are equated with the three bodies, physical, subtle and causal. The Atman or the soul, serves as a monitor to unite the three states and is the basis of their harmony. The Mandukya Upanishad also recognizes the fourth state of consciousness, namely, the turiya or the base-consciousness, which is equated with atman and purusha or universal consciousness.

11 Lessons From Lord Shiva We Can Apply To Our Lives
What Attracts Westerners to Hinduism?
Comment