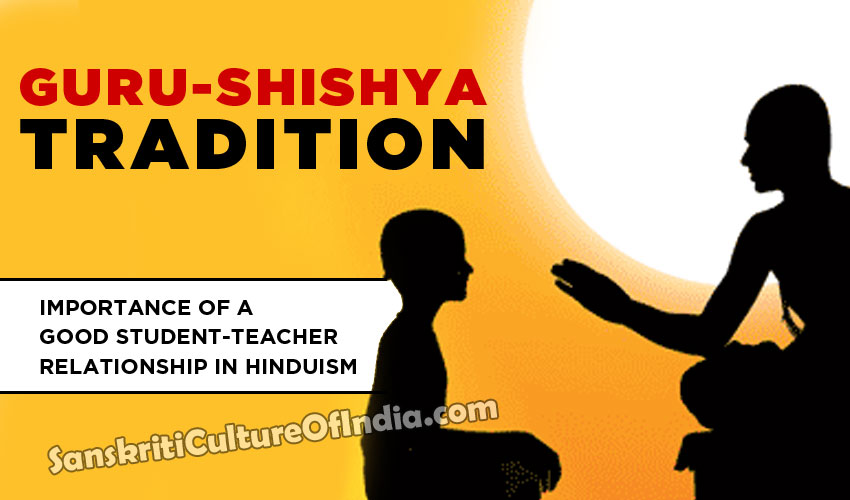 The Guru-shishya paramparya thrived and flourished for thousands of years in India. In this culture, when there was a need to convey subtle and powerful knowledge, it was always done in an atmosphere of utter trust, dedication, and intimacy between the Guru (Master) and the shishya (disciple). “Parampara” is literally defined as “an uninterrupted tradition” – in other words, it denotes an unbroken lineage of imparted knowledge.

Describing the tradition, Sadhguru says: “India is the only place where this kind of tradition existed. That is, one person realizes something, and he looks for somebody who is truly dedicated, who holds this truth above his life. He looks for such a person and transmits it to him. This person looks for another like that and transmits it to him. This chain continued for thousands of years without a single break. This is known as Guru-shishya paramparya.”

Though they knew writing, spiritual aspects of life were never written down because once you write, all the wrong kinds of people will read it and misinterpret it. Only a person who is in a certain level of experience should know it; others should not. That is how it was transmitted. Only when the Guru-shishya paramparya started breaking up, did they start writing down the spiritual truths. Until then it was never written down. Once you write it, the first people who are going to read these books are the scholars. Once it gets into the scholars’ hands, it is finished. Truth is over.”

“A guru is not a teacher. The Guru-shishya relationship is on an energy basis. He touches you in a dimension where nobody else can. There is a space where nobody else – your husband, your wife, your child, your parent – can touch you. They can only touch you in your emotion, your mind or your body. If you want to reach the very peak of your consciousness, you need lot of energy – all the energy you have and more. A Guru-shishya relationship has become so sacred and important because when the crisis moment comes in a disciple’s growth, he needs a little push on the energy level. Without that push, he doesn’t have the necessary energy to reach the peak. Only someone who is on a higher plane than yourself can give that little push to you. Nobody else.”

In Gurugita, it is said:

Guru is the embodiment of Brahma, Vishnu and Mahesh.
Guru is the Supreme Spirit, my salutations to such a Guru.

In the Ramcharitmanas, 92/3, Sant Tulsidas said:

Without Guru’s guidance, no one can swim across the vast ocean-life life.
One may have the power to create or destroy like Brahma or Shiva but to rise above one’s mind, feelings and beliefs, one needs a guru to be directed in the right path.

In Aapastambgrah Sutra it is stated:

Mother and father give birth to the physical self.  It is the teacher who gives true birth to the soul.  It is called a special birth by the wise.

Lord Shiva explains the importance of a guru to Parvati: 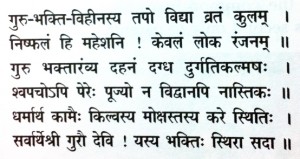 Devi !  A person may be an ascetic, extremely knowledgeable, an aristocrat or a combination of all of these.  However, his wisdom is meaningless if he does not have a guru or is not devoted to one.  He may gain popularity from his intelligence and aristocracy but it will bear no fruit in the end.  An immoral or unprincipled person becomes reputable when he offers his wood-like sins to the fire-like devotion of the guru.  But when an unbelieving knowledgeable person does not accept the divinity in the guru, such a person cannot be held in high esteem.

One cannot attain knowledge without serving the guru.  A good guru is one who imparts knowledge and takes one towards spirituality.  Gurupurnima is a day to celebrate such a teacher.

Swami Vivekananda’s Speech on Hinduism
Why caring for parents is the best service?
Comment