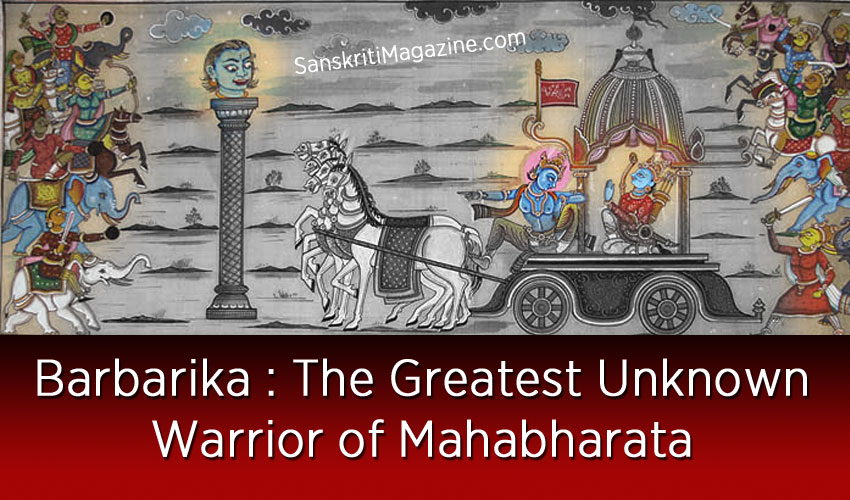 Barbarik was the grandson of Bhima and the son of Ghatotkacha.

Having learned the art of warfare from his mother, Barbarik became one of the bravest warrior of his time.   Pleased with his talents, Lord Shiva granted him three special arrows and a special bow from Lord Agni.

It is said that Barbarik was so powerful that according to him the war of Mahabharata could end in 1 minute if he alone were to fight it.

At the beginning of the great war, Lord Krishna asked everyone how long it would take them to finish the battle if they were to fight alone against the enemy.

Hearing of Barbarik’s interest in the war, Krishna decided to test his strength and appeared before him disguised as a Brahmin.  Krishna asked him the same question: if Barbarik were to fight in the battle alone against the enemy, how many days would it take him to finish the war.

Surprised at his answer, especially when Barbarik only had 3 arrows and a bow in hand, Krishna questioned his response.  Barbaric explained the power of his weapons:

And at the end of this all the arrows would return to the quiver. Krishna eager to test this out asked Barbarik to tie all the leaves of the tree that he was standing under. As Barbarik started meditating to perform the task, Krishna took one leaf from the tree and placed it under his foot without Barbarik’s knowledge. When Barbarik released the first arrow, the arrow marked all the leaves from the tree and started revolving around Lord Krishna’s feet.

Krishna asks Barbarik as to why the arrow was doing this. To this Barbarik replied that there must be a leaf under your feet and asks Krishna to lift his leg. As soon as Krishna lifts his leg, the arrow marked the remaining leaf too.

This incident worried Lord Krishna about the phenomenal power of Barbarik as the arrows were truly infallible. Krishna also realized that in the real battlefield in case Krishna wanted to isolate someone (for eg the 5 Pandavas) from Barbarik’s attack, then he would not be able to do so, since even without the knowledge of Barbarik, the arrow would go ahead and destroy the target if Barbarik intended so.

Krishna asked Barbarik which side he was planning to fight for in the war. Barbarik explains that since the Kaurava Army is bigger than the Pandava Army and because of the condition he had agreed to with his mother, he would fight for the Pandavas. But to this Lord Krishna explains the paradox of the condition he had agreed with his mother that since he was the greatest warrior on the battlefield, whichever side he joined would make the other side weaker. So eventually he would end up oscillating between the two sides and destroy everyone except himself. 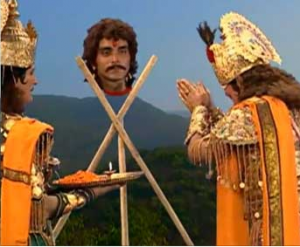 Thus Krishna informed Barbarik the actual consequence of the word that he had given to his mother. Thus Krishna (still disguised as a Brahmin) asks for Barbarik’s head in charity to avoid his involvement in the war. After this Krishna explained that it was necessary to sacrifice the head of the greatest Kshatriya in order to worship the battlefield and that he regarded Barbarik as the greatest Kshatriya of that time.

Before giving his head, Barbarik expresses his desire to view the forthcoming battle to which Krishna agreed and placed Barbarik’s head on top of the mountain that overlooked the battlefield. At the end of the war, the Pandavas argued amongst themselves about whose was the greatest contribution to their victory. Krishna suggested that Barbarik’s head should be allowed to judge this since it has watched the entire war.

Barbarik’s head informs them that it was Krishna alone who was responsible for the victory in the war. It was Krishna’s advice, his strategy and his presence that were crucial in the victory.

So what if Ganesha had plastic surgery?
Purpose of prayers for Departed Souls
Comment