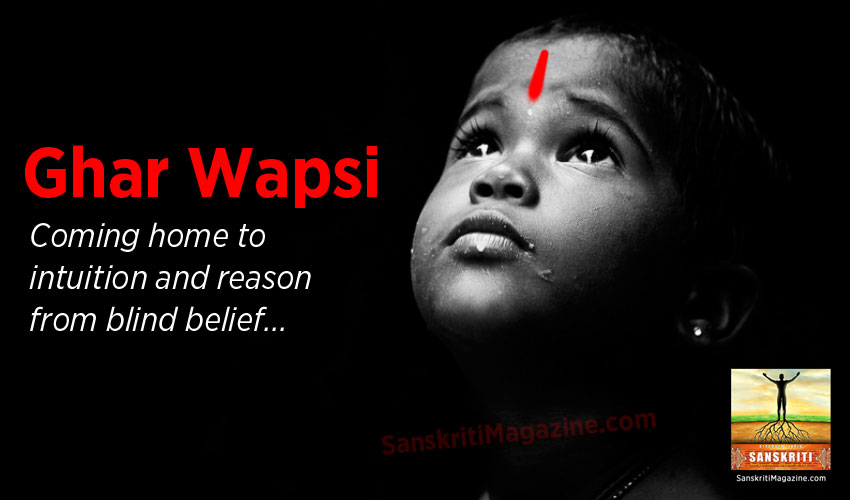 The topic of conversion has become centre stage in India – not because millions have been converted from their Hindu faith to Christianity and Islam in recent years, but because some 50 Muslim families came back to Hindu Dharma (Ghar Wapsi).

‘How dare Hindus do what only Christians and Muslims are entitled to?’ seems to be the motto. Strangely, not only representatives of the dogmatic religions and western mainstream media, including the New York Times, are outraged, but even Indians with Hindu names. Why would they bat for religions that require blind faith, and not for their own Dharma that is based on deep philosophy? The reason may be that many Indians are ignorant, when it comes to religion. They neither know their own tradition, as they have been to convent schools or grown up in westernized families, nor do they know the insidious effect of dogmatic religions as they never were insiders.

Since I grew up as a Christian, I may see clearer why the dogmatic religions depend on conversion and indoctrination to gain followers. The reason is simple: Suppose a community on some island is completely unconnected to the modern world. They will never become Christians or Muslims because they would need to be told a story about God sending his only son to earth 2000 years ago, etc. and then they would need to believe it blindly and get baptized. Yet if these islanders had wondered about the truth, they might have come to similar conclusions like Sanatana Dharma, as it doesn’t depend on some event in history. It only requires dedicated, deep enquiry into “That What Truly Is – Now And Always”.

Everyone, who learns about Christianity and Islam, will right away discover illogicality: both religions claim that they are the only true religion and all human beings have to follow it, and both also claim that the Creator of this universe has endorsed this claim. Now such claim would be of great consequence, if it were true. However, none of the contenders for the “only truth” provides any proof. To cover this up, they put forth an ingenious idea: “You will know that it is the truth when you are dead. After you die you will be rewarded with heaven for believing what we tell you.”
“And what if it is not true?” may someone have asked.
“What!! You doubt the word of God? You deserve to be put to death!” was the harsh answer given by both religious ideologies over many centuries.

So apart from dangling the carrot regarding the other world, they also used the stick in this world. The threat: “If you don’t believe what we tell you, you will be killed”, was not only the hissing of a snake. It was a deadly bite. Christianity stopped killing in the name of God only some 250 years ago and Islam is still at it, with ISIS or Boko Haram being examples of inhuman brutalities in the name of Allah.

Why would they do this? Do they really believe that it is God’s command? I don’t know. But I guess that ultimately it is about power and big money and not about “saving souls”, as claimed.

The strategy to claim divine approval for the demands of a small group had mind boggling results. After some 2000 years for Christianity and 1400 years for Islam, 2 billion human beings consider themselves as Christians and 1,5 billion as Muslims. Imagine, Christianity started with a small group in Palestine and later in Rome, and Islam started with a small group in Mecca and later in Medina. These huge numbers are no doubt extraordinary. However, it was paid for with a heavy price by countless individuals who felt not convinced by the dogmas and behavior of the clergy, but had to conform if they held their lives dear. Further, societies under the sway of Christianity and Islam were neither free, nor happy.

One’s own conscience needed to be suspended in favour of the religious doctrine. I learnt it in catechism class as a child: ”If there is conflict between one’s conscience and what the Church says, one has to follow the Church.”

This demand is serious and shows that not all is well with those religions. Is conscience, supported by sound reason, not our moral barometer? Is freedom of conscience not guaranteed in the Declaration of Human Rights? Is it not dangerous to demand suspension in favour of an ideology that may promote, apart from good, also unethical behavior? Should such ideologies that demand blind allegiance not be intensely scrutinized in the interest of humanity?

ISIS terrorists are a case in point. Have those youngsters no conscience? Or has it been silenced by the Quranic injunction to wage Jihad for Allah? They brush away any human feeling and justify their worst, violent instincts. Do they really believe they will be rewarded with paradise for slaughtering other human beings in whom the same one life and love is throbbing?

There are other features of the dogmatic religions that don’t stand up to scrutiny:

For example the claim that the creator – God or Allah – is watching us from ‘somewhere’. He (alleged to be male) is not our essence according to the dogmatic religions. To claim, as Indian traditions do, that the cause/ creator is permeating the whole universe, and we are in our innermost being one with That, is considered heresy. Several Christian and Muslim mystics were killed for expressing their experience of being one with the Whole.

Another doubtful claim is that human beings have only one life, and on the basis of this one life, eternity will be decided – either heaven or hell. Simply by reasoning, this seems unlikely. Then there are many cases (over 3000 are documented in the archive of the University of Virginia, USA.) where persons remembered their past life and gave details about their previous life that nobody could know. Moreover, the law of karma makes much more sense when it is stretched over many lives.

Another point is the attitude towards animals and nature. Man is considered as the crown of creation and the rest is there for his service. It is clearly a harmful attitude and the west is in the process of changing it. Butchering animals on a daily basis by the millions can’t be the ‘right’ of man. It demeans him. Vegetarianism is, at least in theory, seen as a solution to many problems.

Extremely harmful is also another attitude: Arrogance towards those, who don’t belong to one’s religion, as they are damned by the Highest himself. “Don’t think about truth” is told to children and adults. “Man can never know the truth. God had to reveal it and he has revealed it only in the Bible”, claims Christianity or “only in Quran”, claims Islam. And they assure their flock: “You belong to the chosen ones. You are very lucky”.

Unfortunately, this claim caters to a weakness in human beings. Who doesn’t like to feel superior to others, and more so, when it is divinely ordained? Further, to belong to a big group of like-minded people gives a sense of strength. The only requirement is ‘blind faith’ in return. It may seem a small price, but it is huge. It undermines one’s integrity and humanness.

Christianity stopped killing those who dissent with the dogmas of the Church, but “conversion” of heathen is still considered the sacred duty of every good Christian. Muslims, too, have to bring the whole world to worship only Allah and obviously, the agenda is still unfinished. “Conversion” has necessarily an element of coercion – allurement, deception or threat – because believing unverifiable claims as absolute truth does not come naturally. Both religions didn’t grow to those huge numbers by convincing arguments, as there are no convincing arguments. They grew by conversion and by indoctrination of small children born to those who were converted. Every sane, liberal person should welcome a ban on conversions by coercion.

Westerners are gradually getting out from the grip of forced Christianity. Theirs was a joyless religion and many are tired of it. They don’t believe anymore that only one way leads to truth; they consider rebirth as possible and become vegetarians. They are influenced by Indian thought and those who visited India are almost envious of the joyful, sacred atmosphere of spiritual India. Just attending for example Ganga Arti or Ramayana Parayanam induces automatically a feeling of awe, wonder and joy.

“We are all Hindus now” was the title of an article in Newsweek a few years ago that summarized the preference among many Americans for Indian insights that are based on reason and intuition, instead of blindly believing in Christian dogmas. This does not mean that those Americans stop praying to Jesus or won’t sing Christmas carols, but they don’t swallow the whole belief system anymore. They use their conscience and intelligence, and refuse to believe incredible dogmas, like that heathen go to hell. This means, they are more like Hindus.

Westerners become more Hindu and persons with Hindu names shout on Indian TV that Indians that were converted must continue to wear their straightjacket and must not be allowed to come back to their eternal, joyful Dharma. Further, these same persons have no objection that Christians and Muslims continue their conversion agenda by dubious means and plenty of money. The strangest thing: these people claim to be liberal, secular and progressive. Can someone please make them see light?

Five Dharmic Debts (Rin) of Every Hindu – Have you paid yours ?
108 Names of Durga
Comment