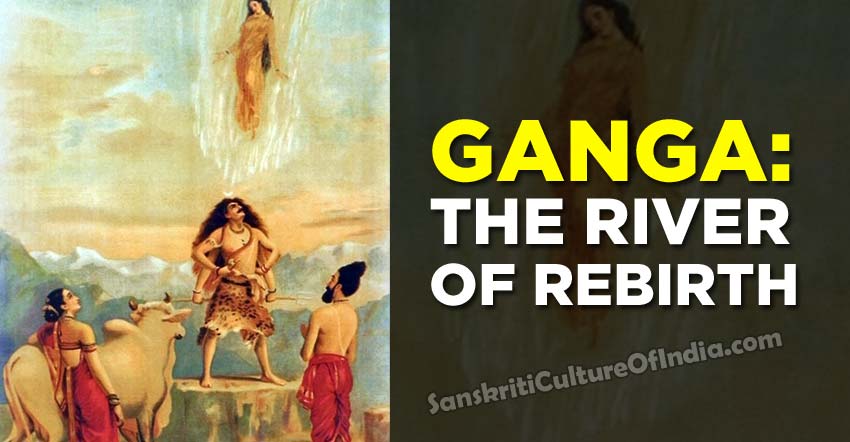 Chronicles known as Puranas narrate the tale of how Ganga came down to earth to help those who die take birth once more.

A king called Sagara was once performing a yagna. If the ritual was a success, he would become Indra, king of paradise, and have access to all the pleasures of the world, including immortality. But there was already an Indra in the sky, and he could not bear the idea of being replaced. So he stole Sagara’s horse that was an integral part of the ritual and hid it in the hermitage of a sage called Kapil. The sons of Sagara looked everywhere for the horse. They dug so deep that they created a crater that eventually became the receptacle of the sea. Finally they found the horse in Kapil’s hermitage and they accused Kapil of theft. Kapil’s eyes were shut at this time, as he was lost in deep contemplation. He had no idea of Indra’s mischief.

Irritated by the disturbance, he opened his eyes. So fiery was his first glance that the sons of Sagara who stood before him shouting accusations burst into flames and were reduced to a heap of ash. Indra smiled and Kapil shut his eyes once again. A heartbroken Sagara wondered, “My sons have been killed in their youth. I will die of old age. None of us will be Indra. The yagna had been abandoned midway. None of us will sip Amrita, the nectar of immortality. None of us will experience unending joy. Is every living creature doomed to die having lived such incomplete lives?”

Sagara searched for an answer. So did his son Anshuman, and Anshuman’s son Dilip and finally Dilip’s son Bhagirath. Bhagirath met Garud, the eagle, the only creature who had defeated Indra in battle. He said, “If the ashes of your ancestors are washed by the Ganga they will be reborn and have a second chance of life.” Unfortunately Ganga flowed in the sky.

Bhagirath prayed to Brahma, father of all living creatures, and he promised to persuade Ganga to descend on earth. “But beware,” said the haughty river-goddess when compelled to descend, “the force of my fall will surely wash away all life on earth and crush its very foundations.” Bhagirath therefore invoked Shiva. Shiva agreed to let Ganga fall on his head and thus protect the earth from direct impact. The world watched the spectacle of water descending from the sky. Indra gloated, convinced that Ganga would destroy all of humanity, and with that all threats to his reign.

But when Ganga fell on Shiva’s head, she found his head was covered with thick matted hair, so thick and so densely matted that she found herself getting entangled and trapped. Far from washing away life and breaking the foundations of earth, Ganga found herself locked up atop Shiva’s head. She tried to find a way out, but Shiva’s locks were like a labyrinth. There was no escape. She begged and cried, and finally, Shiva relented and Ganga flowed out of Shiva’s head, down the slopes of Kailasa, through the ravines of the Himalayas, onto the plains and finally towards the sea. Her bubbly movements irritated one sage called Jahnu who swallowed her whole but when Bhagirath revealed the identity and importance of the river, he released the river through his ear, after which she came to be known as his daughter, Jahnavi.

The idea of rebirth and the Ganga cannot be separated. The river comes from the land of Indra, who has access to Amrita, the nectar of immortality. Indra, the hero of Vedic hymns, lives the life everyone on earth wants to live. He is strong and powerful and attractive and invincible. All day he spends enjoying the good things in life. He does not fear aging or death. Kings of the earth, such as Sagara, envy him. They all want to live Indra’s perfect life. They spend their lifetimes working towards it. Eventually everyone fails – those who die  young like Sagara’s sons and even those who die old like Sagara himself. And everyone wonders, if there will ever be another chance to become Indra.

A dip in the Ganga is about getting a karmic clean slate, a chance to begin life with a new balance sheet. Throwing ashes in the Ganga is about giving the dead a chance to be reborn once more, hopefully in Indra’s paradise, and enjoy all things that were denied in this life. Ganga thus is all about forgiveness and second chances. It is an idea that gives hope to humanity.

The doctrine of rebirth is perhaps informed by agricultural practices on the riverbank, where crops grow and are harvested every year with cyclical regularity. Every year there are the rains, the summer heat and the winter chill. Nothing lasts forever, but everything comes back eventually. But civilizations of Egypt, Mesopotamia and China were also nurtured on the banks of rivers. Rebirth never featured in their stories. All of them spoke of death and an endless afterlife. They built pyramids and tombs to the dead and kept the ashes of ancestors in urns and temples, to celebrate the life that was. They did not cremate the dead and scatter ashes in a river, in hope of yet another life. This life was their one and only chance. In the river valley civilizations of India, however, the idea of a second chance took root firmly, perhaps because of men that the Greek followers of Alexander, the Great, identified as gymnosophists or the naked wise men, who imagined the world very differently.

Ganga’s story refers to several such naked wise men, such as Kapil and Jahnu and Gotama and Agastya, but none more spectacular and magnificent as Shiva, from whose dreadlocks springs the promise of rebirth in the form of Ganga, and who smears his body with ash to remind all of the promise of soul that outlives death!

Shiva is the great destroyer whose worship scholars often fumble to explain.  How can a destroyer be worshipped? Few ponder over what Shiva actually destroys. Even today, writers on Shiva insist on describing him as ‘destroyer of evil’ or ‘creative destroyer’ which reveals this long discomfort with the term ‘destroyer’. Yes, Shiva is destroyer. He is Yamantaka, the destroyer of death, and Kamantaka, destroyer of desire. He is the destroyer of limitations imposed by one life.

Shiva, and the gymnosophists who considered him Adi-nath, or the primal teacher, offer a dual promise: a temporal promise to live as many lives one wants trying to be Indra, and a transcendental promise to break free from this foolhardy quest someday. This is not redemption or salvation or liberation. This is not enlightenment. This is just the offer of infinite second chances. With this one offer, death ceases to be a full stop; it becomes a comma. Shiva, the destroyer of death, then becomes worthy of worship, as does the river sprouting from his head.