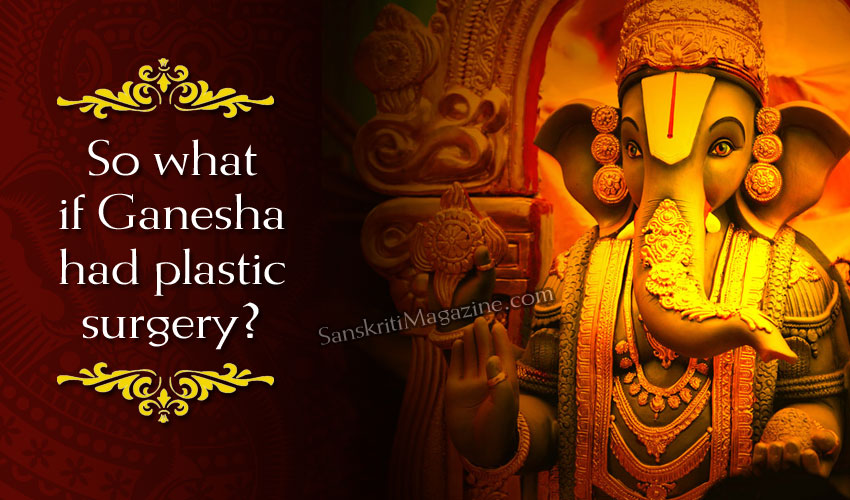 Once upon a time, there was a man who cut his son’s head. To bring the boy back to life, plastic surgeons transplanted on the severed neck the head of an elephant. The elephant-headed boy, a miracle of surgery, was worshipped as a god.

This is not a page out of mythological fiction novel. This is what some people believe happened in India’s past, long ago, so long ago that no archaeologist or historian can find evidence of the event. The Prime Minister of India Narendra Modi stated this in a function to inaugurate a state-of-the-art hospital recently. No surgeon or physician, present there, challenged this. Some of them even believed this.

Many guffaw at such beliefs rooted as they are in sacred stories, not empirical evidence. Surely this is fantasy, maybe even science fiction, or at best, a metaphor for a psychological truth. A myth!

You can never hope to convince one side or the other. The fault line between those who don’t care for the scientific method and those who mock matters of faith runs deep. They don’t even agree on what constitutes science.

The issue, however, is not of truth or falsehood. The issue is of self-esteem.

Imagine a man who passionately believes in something you are convinced is stupid. What happens when you declare his belief stupid? Invariably he will assume you are calling him stupid. Does anyone, stupid or otherwise, like being called stupid? No, they don’t. So they dig their heels, and insist their belief, and so they, are not stupid. They go out of their way to prove the correctness of their belief. They initiate attacks on those who challenge their beliefs. The ‘truth’ brigade gets outraged, and fights back. Things spiral out of control. And no one gets the wiser.

Why do some people around the world want to believe in the fantastic? That God created the world in seven days. That Jesus was immaculately conceived and that he resurrected himself after death. That Muhammad flew from Jerusalem to Heaven on a winged horse. That Pushpak Viman was the world’s first aeroplane. That Ganesha had plastic surgery.

What happens when you tear this belief down in the quest for ‘truth’? You attack self-worth and self-esteem. Rage and violence follows.

When the British came to India, they knew that to rule Indians they had destroy Indians psychologically. So they went out of their way to mock all Hindu customs and beliefs in the name of ‘science’. Never once was this ‘science’ used to challenge the dogmas of the Church. Even today, in America, one sees the tension between the rational thinkers who speak of ‘evolution’ and the Christian extremists who insist on ‘intelligent design’. The courts are divided on this, as the ‘truth’ is grounded in faith. Faith, by definition, is indifferent to rationality and measurement. People try to distinguish between faith and belief, sacred history and superstition, but these are hair-splitting arguments all based on how much of rationality we apply to trust. It reveals deep discomfort with cultural assumptions or subjective truth, which is often labelled as myth.

The greatest myth in the world is that ‘truth brings peace’. Those who believe in science and rationality believe this. What is often overlooked is that this myth has its foundation in Abrahamic mythology where the ‘true god’ is jealous and demanding and does not allow the worship of ‘false gods’. Science, like Judaism, Islam and Christianity, is impatient with alternate views about life and the world. Nation states that also value only ‘one truth’ determined by the courts align to this myth.

This way of approaching life, based on intolerance of other ways of thinking, certainly has its value, but is not favoured by all cultures. Certainly not China, where social order is far more important, than philosophical truths, which is why the Singapore parliament announced that it would keep, but not enforce, its anti-gay law, an ambiguity despite reassurance by the prime minister that has ‘principled’ activists smarting.

Rishis, ancient Indian seers, saw the world differently. They did not bother with ‘one universal truth’. Hindu scriptures never speak of destruction of ‘false’ gods. They realised that every person or community has their own god/truth. This truth is not objective. It is subjective, constructed to make us feel good about ourselves. Wisdom is appreciating people’s truth and realising that no one has the bandwidth to know every truth. Yes, there is satya (limitless truth) but only one with an unlimited mind (brah-mana) can know it. This way of thinking ironically resonates scientific thought. Scientific truth is never absolute. It is conditional on the measuring instruments used and measuring instruments are getting better all the time. The scientist must have an open mind as his/her thesis is limited to available data. Some people believe that with the right measuring instruments one day we will prove that Ganesha was indeed saved by a plastic surgeon. Can we allow them to have that faith?

If China gives value to social order over truth, India gives value to people’s self-esteem over truth. Wisdom dictates allowing people to cling to their truths, however absurd it may seem to us, until wisdom prevails in them, or in us. It leads to tolerance and inclusion. Some people call it love. Let people believe that Ganesha did undergo plastic surgery. Let people also know that such beliefs can never be proven scientifically, but remain matters of faith. Let people appreciate why such some people need such fantastic beliefs, and others don’t. Let people appreciate why some people can’t handle such fabulous truths, and others don’t. Surely our mind can accommodate more than one truth.