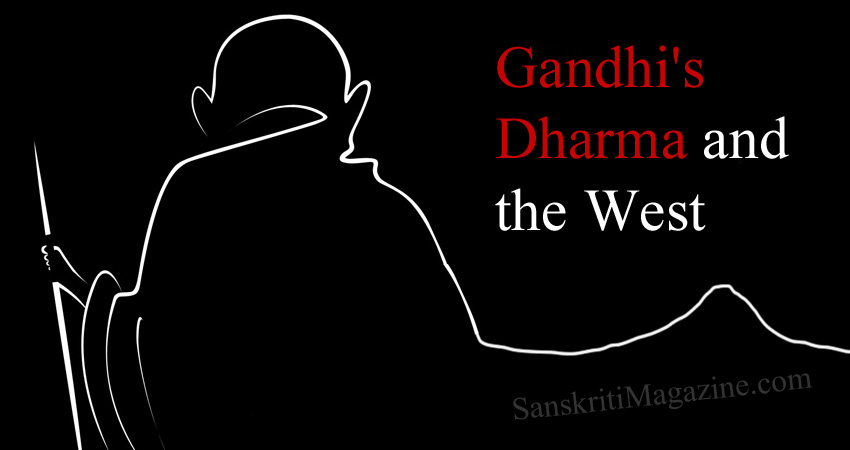 Mahatma Gandhi articulated his sva-dharma (“my dharma”) using a few key Sanskrit words that do not have an exact English equivalent. One of these is satya, his practice of truth. Unlike truth in the Western sense, satya is not an intellectual proposition but a way of life which has to be actualized and embodied directly by each person. There is no place for the reification or codification of satya, because truth is not held in some book or set of laws; it lives in oneself, and cannot be separated from oneself. This philosophical distinction is at the heart of Gandhi’s dharma.

He insisted that satya-graha, or “truth-struggle,” is a civil disobedience method that has to be individually lived, as opposed to being theorized or institutionalized. Later, this method inspired the Rev. Martin Luther King Jr.’s civil rights movement in the U.S. as well as revolutions in South Africa, Poland and elsewhere. He not only advocated a sustainable society, he lived sustainably. The Gandhi library in Delhi contains the sum total of all of his personal belongings: his glasses, a pair of sandals, a pen and a few dhotis.

Another fundamental component of his dharma is captured in the term ahimsa, which is translated too simply as “nonviolence” but is not the same as the common idea of “pacifism.” It is much larger. Himsa means harming, and ahimsa means non-harming. Harming the environment is himsa, as per the very deep dharmic idea that all nature is sacred. Harming animals is also himsa, and so vegetarianism is an important quality of ahimsa. Gandhi argued that vegetarianism has a lower impact on the environment than a meat diet, and hence a vegetarian society is more eco-sustainable than a carnivorous one. The modern eco-feminism movement was galvanized by Gandhi’s ideals brought to America in the 1960s.

To achieve ahimsa requires enormous activity, including confrontation, such as he used while challenging the mighty British Empire that caused himsa on a large scale. Paradoxically, it takes a fighter to actualize ahimsa. Gandhi was such a fighter. He is falsely depicted as “passive” and non-threatening. In fact, he was audacious, outspoken (what we today call “politically incorrect”), and refused to be appropriated by anyone.

Ahimsa also applies to cultures taken as a whole. Cultural genocide is the systematic and complete elimination or suppression of the native religion, language, dress, way of life, customs and/or symbols of one people by another. Even though the people in question might be given material benefits through humanitarian aid, education and medical facilities, it is still himsa if there is systematic destruction of their identity, sense of history, ideas of ancestry and relationship with nature. This kind of himsa goes on today under the name of “development.” In the United Nations laws of genocide, the phrase “cultural genocide” was dropped from the earlier drafts.

Gandhi fully understood cultural violence and often talked about it. He believed that cultural difference is not to be erased but celebrated, another old dharmic idea. The universe is built on diversity. In fact, that is what the word “uni-verse” means: the many-in-one. Every species has sub species and sub-sub species and this nesting of diversity goes on and on. Cultural homogeneity is therefore unnatural and unfeasible. There should not be one single religion or way of life. Everyone should have his or her own sva-dharma depending on personal circumstances and tendencies.

Gandhi fought against cultural colonization as much as against its material and political manifestations. Although he was not against Christianity (and in fact often quoted Jesus), he opposed Christian missionaries in India. He said they should only do selfless work and not convert people. If they desired to run a school or hospital, or give the poor food, these things should not become a tool for conversion.

Embodying the principle of diversity, he wore a traditional dhoti, went barefoot and bare-chested and felt comfortable sitting on the floor. Even when he went to England in 1931 and King George V held a reception in his honor at Buckingham Palace, he wore the same frayed sandals that carried him on his famous march of civil disobedience to defy the British law banning Indians from making salt. He spoke in simple village language and lived with the poorest people, accentuating his different aesthetics from the elites.

Yet another Sanskrit term that Gandhi emphasized was svadesi, meaning “from the soil,” a native product, similar to the “buy local” movement which is now fashionable in the West. The preference for local production and seasonal eating was based on the ideal of ahimsa. Svadesi is better for the environment and for the health of individuals because they are acclimatized to local things and have a relationship with the natural setting in which they live. Svadesi entails eating locally grown food, wearing locally made clothes and, where possible, buying locally made goods. He produced his own cloth, milked his own goat, etc.

He advocated a dharmic society based on traditional decentralized governance built from the bottom-up at the village level. This conflicted directly with the top-down British system. Western approaches to human rights also operate in a top-down power structure in which the political activists, aid workers and NGOs with access to global media and funding are positioned as agents, and take “the burden” and responsibility of others’ agency upon themselves. This approach is incompatible with the ideal of empowering the people for their own truth-struggle.

Ahimsa is not something merely to be talked about or legislated; it must be lived by every individual. This requires bottom-up social activism whereby the people themselves embody the change they want to see in the world. Hence, one must have a functional, sustainable society in which the people at the bottom are free to embody their satya. It was for this reason, and not just as an end in itself, that he demanded swaraj or self-rule from the British.

Self-rule is thus much more than mere political independence and involves both “freedom to” and “freedom from.” In the West, freedom is conceived as freedom to own a car, to travel, to shop, to speak. In other words, it is extroverted. But such a pursuit does not produce freedom from anger, or from desire, jealousy, habits and compulsions. In the latter notion, one is free from the conditioned self or ego. Gandhi always worked toward personally embodying this state of freedom from internal and external dependencies.

He frequently explained that there was indeed a deep ideological clash of civilizations between Britain and India. The unsustainability of British industrialization was prominent among his concerns, making him arguably the first modern proponent of sustainability. He was troubled that the ever increasing consumption in an industrial economy depletes the natural resources and destroys the self-sustaining villages which comprise India’s social fabric.

When he turned his attention to the British way of life, criticizing its exploitative practices, hierarchies and industrial consumerism, he was “reversing the gaze” — quite provocatively — on another civilization. In the dharma traditions, this kind of informed analysis of another worldview is called purva-paksha. His short book Hind Swaraj (Indian Self-Rule), published a century ago, is a magnificent example of purva-paksha directed toward the British Empire. It examines colonialism from an Indian perspective, including criticism of those Indian elites who had joined hands with the British.

He took the Bhagavad Gita’s notion of kurukshetra (battlefield) and lived his dharma in terms of the battles to be fought. Unfortunately, after his death, many of his ideas were translated so completely as to lose their original nuance of meaning. In this way, Gandhi has been domesticated, replaced with “Gandhism.” Many so-called “Gandhians” do not embody the truth-struggle and are part of centralized power structures. This is himsa to Gandhi.