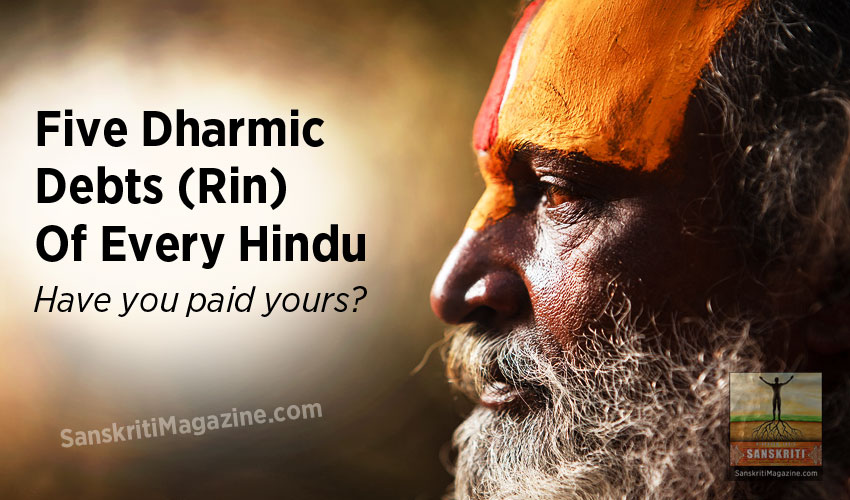 No we’re not talking about credit cards, loans and mortgages here, but totally different kinds of debts, of an ethical and spiritual nature.

Since ancient times, Hindu thought has recognised various debts (rins) that play an important part in dharmic values. It is said that each person is born with these debts and must repay them in order to live a fulfilled and complete life. These debts are not meant to be a burden, but are a recognition and expression of gratitude for the numerous gifts that we receive from the world often taken for granted. A person who takes from the world without giving something back is looked upon very unfavourably, and incurs further karmic bondage. The Bhagavad Gita is quite emphatic about such a person: “Evil is his being, sensual is his delight, in vain, O Partha, that man lives”.

The following are the main debts, together with a brief explanations of their significance:

Deva Rin – debt to the Deities

The air we breathe, the processes of digestion, sleep, renewal, growth, our access to light and the nourishing foods that nature provides are all gifts we usually would take for granted. From the moment of birth, and every moment of life thereafter, our existence is sustained by the interaction of a huge number of forces, material and divine. Hindu thought holds these forces to be endowed with consciousness , and to be eternal. They are characterised as deities, divine forces of consciousness which exist eternally. We are indebted to them for the gift and sustenance of our life, and we should honour them by do our part in the cosmic process, looking after the planet, and leaving it in a better state than we received it in. In some sacred Hindu sacred texts there is separately mentioned debt towards the environment, plants and animals, with whom we are interdependent (Bhuta Rin), but generally this can be encompassed under Deva Rin. Fulfilling Deva Rin is associated with Vedic fire ritual and worship, however the true message underlying these is having a sense of gratitude and spending some of our time working in a spirit of sacrifice, that is working selflessly for the betterment of the world.

A human being is born indebted to his parents and ancestors as they have propagated their lineage and are the cause for birth. One repays this debt in a number of ways:

We benefit from the accumulated knowledge of the ancient and modern Hindu sages. Because of them we have access to teachings and values that can enable us to attain attain inner peace, direction, meaning, family values, social cohesion, and an unparalleled enlightened tradition of open enquiry into the nature of the truth. We are thus indebted to the sages, and we pay this debt by learning and helping propagate this wisdom, and where possible by adding to it in what way we can.

I would extend this Rishi Rin to include all persons who have contributed to humanity’s sum of total knowledge, which benefits us on a day to day basis. For example, advances in science, sanitation, medicine have transformed out world, and there are so many things that we take for granted that have only been possible by the years of study and research that certain great individuals undertook. Having benefited from their work we are in a sense indebted. We can repay this debt in a number of ways, for example by patronising learning and honouring people of knowledge.

This is a brief exposition of a potentially complex subject. These debts make a person look with a sense of responsibility towards the world, and encourage a person to contribute something in return for all the blessings showered upon us.

These concepts are thousands of years old but still have a message today. In a world in which discourse in centred around rights (which I don’t mean to detract from the importance of), it is important to consider our obligations and duties to bring balance and fulfillment. Indeed Vedic ideas such as this can create a fundamental shift in human behaviour and attitude.

In deciding how these ideas are relevant to your own life, remember that Hinduism of today is a vast array of philosophy, ritual and worship that gives a lot of freedom to its followers in deciding how they apply its principles to their own lives. This means you have to think more think for yourself. But fear not – provided that an individual gives sincere thought to such important matters and make conscientious decisions in how to live their lives he/she will be looked upon favourably by Dharma.

What can infants hear in the womb?
Ghar Wapsi: Coming home to intuition and reason – from blind faith
Comment