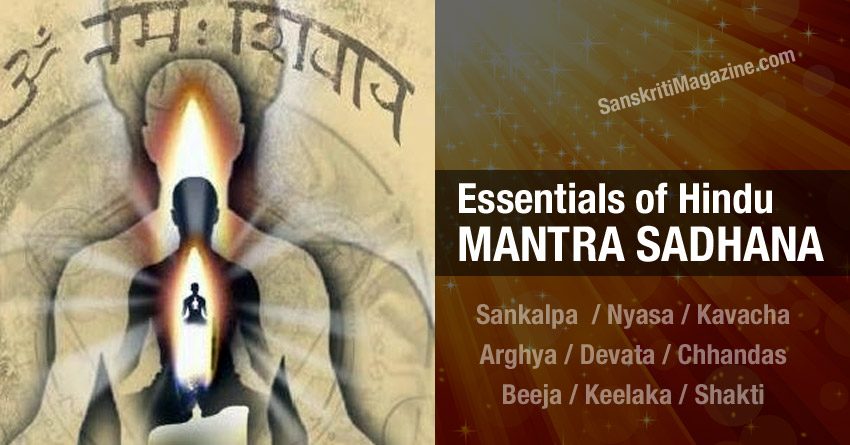 Since ancient time till the present era; Mantras have been used as a remedy for nearly every problem. With the increasing number of TV channels in India, the situation is such that you tell about any issue and one out of ten persons, you will find at least one to come out with a handy Mantra to resolve your issue. The great learned pundits are there on the small screen almost round the clock. Now a question arises, do we really get benefit from those free of cost advice ? I don’t think the TV channels will be helpful to you in this respect. They should be more than happy with the increasing TRP and would hardly get time to undertake a survey to find efficacy of such remedial mantras etc.

With a view to verify the effectiveness of mantras, let us try to answer these questions:

One should not need any thing more than mere common sense to reject the notion of ‘elixir’ kind of a Mantra that can be used to resolve a problem irrespective of nature of problem.

As we accept the low of ‘Cause and Effect’; we have to find the likely cause of a problem and then the remedy has to address the cause. In a way, the remedy should be a kind of reversal process of the cause.

We can understand that every problem has to have a particularly related cause and hence, it has to be addressed with a specific process. Thus, a Mantra to increase physical height of a person cannot be accepted as a cure of Cancer.

Hindu mantras like ‘Maha Mrintyunjaya Mantra’, ‘Gayatri Mantra’, etc. suffer from the notion of ‘One-for-All’ remedy and we most humbly do not agree with the belief.

The sanctity of mantras for spiritual upliftment should be maintained and must not be recommended for temporal laukik reasons as trivial as ‘securing a job transfer ‘ or ‘begetting children’ etc. People indulging in such activities are unknowingly doing a grave disservice to the sacred heritage of Vedas.

Prerequisites for Using a Mantra

The seers who formulated the mantras offered them to their disciples who were well-versed with the prerequisites as a part of the methodology of particular school of spiritual Sadhana. The knowledge of such prerequisites was believed to be so fundamental that its narration, at times, used to be omitted to avoid repetition.

Most of the mantras have been a part of a Stotra or an Upanishad or a fullfleged Sadhana or an Anushthana and were never intended to be used in isolation. However, over a period of time, some of the Pundits started compiling the mantras and formulated books of such collection. At this stage, the brevity was the call and not only the prerequisites, but even the overall purpose and relevance lost their place.

In the modern age, where education and spirituality has turned into an Industry, Astrology, too, has slipped into the hands of commercial people. In absence of honest custodians and the rightful inheritors; mantras are prescribed in most bizarre manner by the commercial astrologers for meeting their selfish means. Needless to say, mantras have become tools in their hands to exploit the greedy and ignorant people.

The Rishis who formulated the mantras also advocated certain procedures to be followed for its right use. This include a formal commitment in the form of ‘Sankalpa’, some movements and gestures in form of ‘Nyasa’, creating protective sheath in form of ‘Kavacha’ and offerings to the Devata in the form of ‘Arghya’.

Let us understand the procedure as well as the parts of mantra.

Sankalpa with respect to Mantra Sadhana, means a formal commitment about one’s plan of the Sadhana. A statement of sankalpa generally contains one’s own identification. This is in the vedic manner including one’s full name, one’s vedic lineage i.e. Veda, Gotra, Shakha etc. Then follows ones desire to chant the Mantra for a particular duration and in particular number or undertake an Anushthana for fulfillment of a particular wish. The sankalpa is addressed to the Devata of the Mantra. Ritualistically, a sankalpa is taken through Sanskrit. However, as we know the significance of Mental vibrations in Mantra Sadhana, it should be OK to undertake the Sankalpa in one’s own language.

Nyasa is an important preparatory stage of Mantra Sadhana. It is in a way a ‘warming up’ and ‘cleansing’ session prior to undertaking Mantra chanting. The sadhaka while exercising Pranayama, touches different parts his body either physically or visualize mentally depending upon the type of nyasa he has adopted. There are different types of Nayasa, e.g.Kara Nyasa, Anga Nyasa, Hridayadi Nyasa, Rishyadi Nyasa, Panchatatwa Nyasa, etc. Here, again the primary objective is to augment the process of attaining embodiment with the Mantra and its Devata at psyche level.

‘Kavacha’ is the imagery shield to be created for the protection of the Sadhaka during Sadhana. It is very important because, the Sadhaka loses his conscious sense of awareness as he transgress into meditative state or altered state of awareness. During such a state he stands vulnerable and exposed to abnormal frequencies and vibrations. The performing of Kavacha protects the Sadhaka from such vibrations. The Kavacha in a way create hypontic layer of self-confidence and keep him comfortable

Arghya is a symbolic gesture of hospitality offered to the Devata. As we offer some tea and snacks and respect to the guest at our home, similarly, here during Mantra sadhana, we are invoking the Devata of the Mantra and suitable welcome is essential. The arghya is normally a mixture of water, milk, curd, flower petals, kumkum, sandal and grains like til (sesame). The mixture is taken in hands in the cavity created by holding two palms together and then poured in the vessel meant for it. The ingredients of Arghya are Devata specific and so is the way of offering it and as such different Mantra Sadhana requires different kind of Arghya. On mental and subtle level, the offering of Arghya signifies surrender of the individual ego at the feet of the Devata.

In addition to the procedure, it is vital to understand the essential parts of a Mantra. Every mantra is suppose to be complete only when it is used with the following six parts, knows as ‘Shadanga’:

Rishi is the person who originally formulated the Mantra. In vedic culture, Rishi is believed as the seer, a visualizer of Mantra. The prerequisite of naming the Rishi of the mantra before using the same is a humble way of showing gratitude and acknowledgement. This act of acknowledgement is the first step towards dissolution of personal pride and ego. The feeling of gratitude initiates the altered state of mind leading to internal environment congenial to invocation of the Devata of the Mantra.

Devata of the Mantra is the form of the god who is being propitiated. The deveta element engages the visualizing faculty of human mind. Every Devata has its own Shape, Colour, Posture, Gesture, Mudra, Ayudha, and personality. The preceding steps of Rishi and Chhanda prepares the ground for effective visualization of the Devata. The initial utterrance of name of the Devata creates flashes of the visions. Its frequent repetition enables a devotee to contemplate upon the form of the Devata. Ultimately, he forgets his own self and gets unified with the form of the Devata.

Chhandas denotes to the grammatical formation of words in a particular rhythm. The chhanda sets the pattern of words and number of syllables. The formation guides the recitation of the Mantra in a particular way. The pattern activates different points in human brain and further augment the internal psychic environment. Each chhanda has its own attributes to influence the mood of the person reciting it.

Beeja is a single letter of Sanskrit Alphabet and it represent, again, shortest possible form of the Devata. The shape of the Beeja creates the route for the energy to vibrate. Beejam resembles the basic character (tatva) of the mantra. for example jala tatva(soft), agni tatva (hard) etc.

Keelaka means a nail. Now, what is significance of a Nail here with respect to reciting a Mantra? To understand the significance of Keelaka we have to link it with the nail that stops a rotating wheel slipping out of its excel. We know that the energy of a mantra is generated from the mind of the person and its important to keep it centered at a point to save it getting dissipated. This is done through Keelaka. Some people symbolize it with a key of the lock. Thus, a keelaka is believed to be a Key to open the lock of the source of a Mantra power.

Shakti means Power. Shakti means power or energy of the Mantra. This is the power generated through reciting the mantra.

It has to be noted that every Mantra has its own form of Shakti. However, let us admit that today, except the name denoted to the Shakti, we do not know much about distinct forms of the energy of Mantra. The main reason for this omission is attributable to the fact that graphical reproduction of the form of energy vibrations visualized during altered state of mind remains difficult. The second reason for the misconception is that we consider the words ‘Devi’ and ‘Shakti’ as synonyms.

Due to this ambiguity, it is quite possible that a Sadhaka of a Mantra may contemplate upon a known form of Devi in stead of the energy vibrations of the Mantra.

Now, it should be clear as to why we don’t get the much acclaimed results from reciting a mantra. If we ignore the essential 6 parts, how can we expect the desired effects?

The limitation lies on two parts. First is the ignorance of the doer. The person who undertakes Mantra, does not know the essential prerequisites. Secondly, the limitation lies with the source from where a person receives the mantra. It is quite common now that people take mantra from any source, be it a cheap pocket book being sold at the roadside, any Sadhu or a TV Jyotishi. It is quite possible that the prerequisites are compromised in offering and receiving the Mantra in this manner.