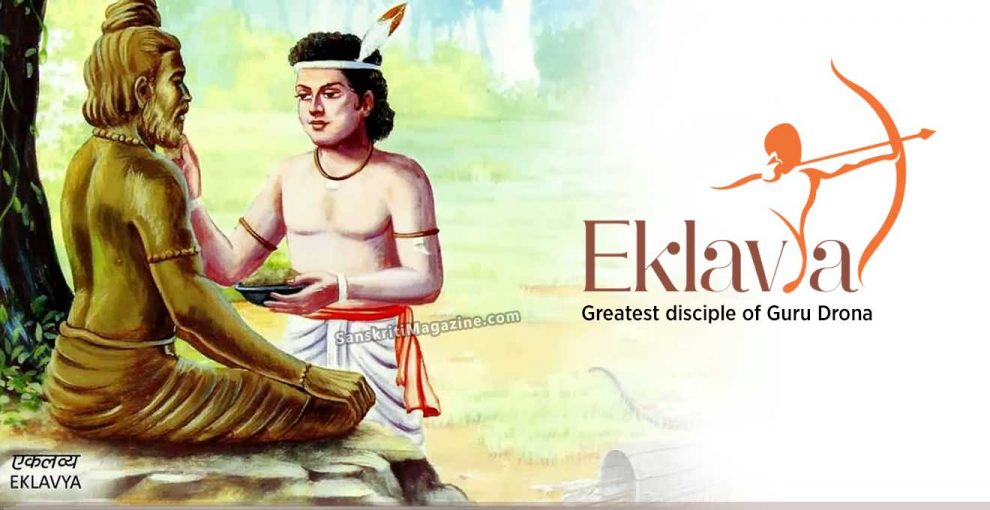 There cannot be a better example of a shishya than Ekalavya. Here we have a person, who learnt archery on his own after denied by his Guru and then given it all when his Guru asked for. This is a supreme example of self sacrifice, another example of greatness where the person did not hesitate to forgo his sole aim in life to save his principles. Another example is Karna.

Ekalavya is a young prince of the Nishadha tribes, and a member of a tribe, who nevertheless aspires to study archery in the gurukul of Dronacharya. After being rejected by Drona, Ekalavya embarks upon a program of self-study in the presence of a clay image of Drona. He achieves a level of skill equal to that of Arjuna, Drona’s favorite and most accomplished pupil. Fearful that he will excel him, Arjuna begs Drona to take action. Drona goes to Ekalavya and demands that Ekalavya turn over his right thumb as a teacher’s fee. The loyal disciple cripples himself, and thereby ruins his prospects as an archer, by severing his thumb and giving it to Drona.

In the Mahabharata, he is introduced as a young prince of the lowly Nishadha tribes. He was born to Devashrava (brother of Vasudeva, who was father of Krishna) and was raised by Hiranyadhanus, the leader (King) of the Nishadhas, who was a commander in the army of Jarasandha (the king of Magadha).

Near the ashrama of Drona, where Arjuna and his brothers used to take lessons in various arts, there lived a small bright boy, shudra by caste (lower caste). His name was Eklavya. He had great desire to learn the art of archery from Dronacharya. But his mother had told him that as a shudra, Acharya Drona would not accept Eklavya as his disciple. It was futile to dream of such a privilege. 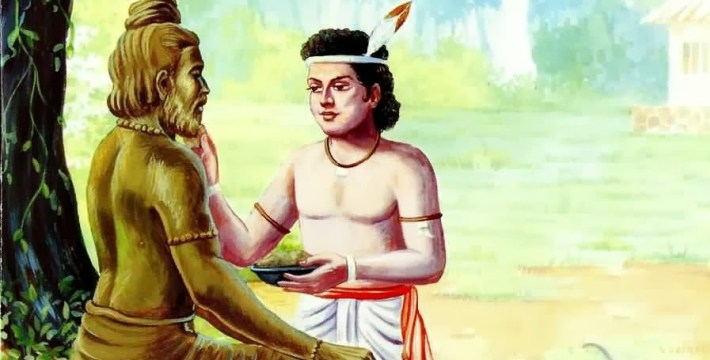 But the boy was not be put off, his determination knew no bounds. Near his house, under a tree Eklavya installed a clay idol of Dronacharya that he worshiped as his Guru! Daily, morning and evening, this devotee put flower and natural perfumes in front of this image and took Self-Lessons in the art of bow and arrow. The talented young Eklavya soon acquired high knowledge in archery. He attributed his success to his Guru Dronacharya.

Ekalavya’s discovery and his gurudakshina

One day, as it happened, Acharya Drona and Arjuna were passing near the hut of Eklavya. It was pleasant and peaceful afternoon and people were taking rest. But the tranquility and silence was broken by constant barking of a dog. Eklavya did not like this, and therefore, he shut the mouth of the dog with an arrow! Dronacharya and Arjuna were surprised to see the dog with his mouth sealed with an arrow!

Naturally the curious Arjuna asked his Gurudev as to who could have done this delicate job. Even Dronacharya was amazed and knew the archer must be exceptionally skilled artist. They decided to trace this skillful fellow and reached the spot where Eklavya was practicing wonders with his bow and arrow in front of the clay image of Drona. It took no time for Dronacharya to understand the situation. He realized that Eklavya was superior to Arjuna in some respects. Dronacharya loved Arjuna very much and had declared him to be the best archer on the earth. Hence the Guru thought for awhile and came to a decision to remove Eklavya as a competitor to Arjuna. 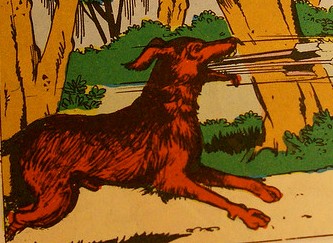 Dronacharya went to Eklavya and said, “O young man, who has taught you such wonderful skills in archery! Who is your Guru?”

Seeing the Guru in front of him, the boy Eklavya was more that overjoyed and said, “Why, O Gurudev, this all is your grace! I worship you as my Guru. Look you are there in that image!”

Dronacharya was pleased with the dedication of Eklavya, and said, “I bless you my son. But as is customary, won’t you give me my fees – Guru-Dakshina!”

[It is customary in India to give to the Guru whatever he demands as his fees – Guru-Dakshina for the knowledge the Guru has given to the disciple.]

Eklavya was overwhelmed to see Dronacharya had accepted him as his disciple! Out he said, “O Honourable Teacher, whatever you ask, this humble disciple of yours will try his utmost to offer you as Guru-Dakshina! I am blessed.”

Guru Drona said, “O Eklavya, I am pleased with your respect for Guru. I want the thumb of your right hand as my fees- Guru-Dakshina.” 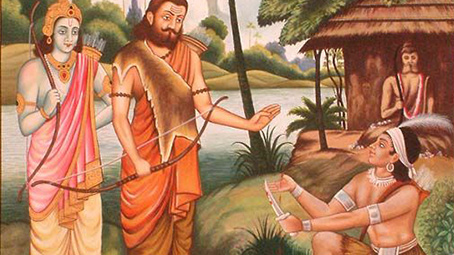 The trees and atmosphere around stood still for a minute! Even Arjuna was stunned on listening to the unusual and almost cruel demand of his Guru. To ask for the thumb of an archer was equivalent to almost kill him! How could Dronacharya demand such a heavy prize from one disciple to protect the honour of the other!But Eklavya had no such remorse. Unruffled and with due humility, cheerfully and without protest, he cut his right thumb and placed at the feet of Dronacharya. Gods in the heaven silently praised the greatness of Eklavya’s sacrifice.

Later, Ekalavya worked as a confidant of King Jarasandh. At the time of Rukmini’s swayamvar, he acted as the messenger between Shishupala and Rukmini’s father Bhishmaka, at Jarasandh’s behest. Bhishmaka decides that Rukmini should marry Shishupala, but instead Rukmini elopes with Krishna. Ekalavya is later killed by Krishna, who hurls a rock against him, in a conflict against Jarasandh’s army.