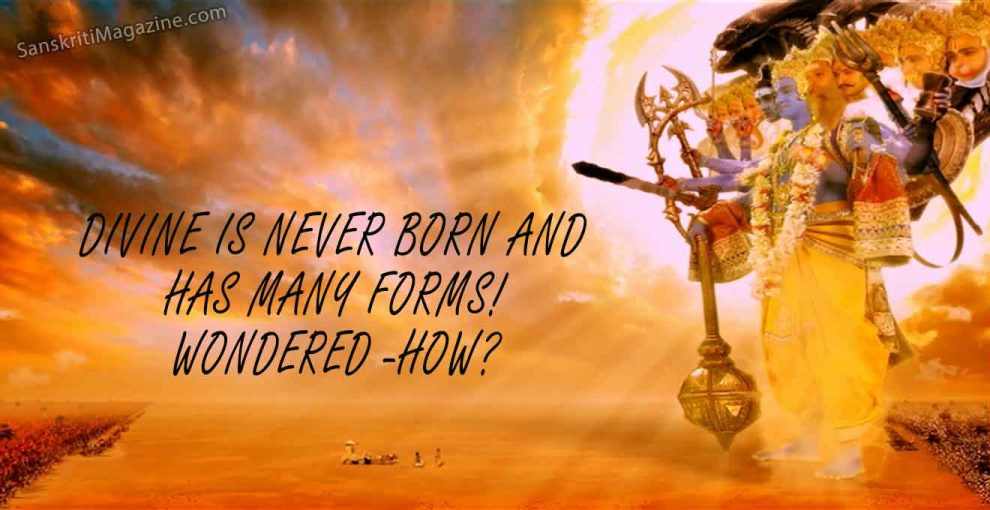 In Sanata Dharma Scriptures Divine is expressed as never born and at the same time has many forms.

What is this Universal Form of God expressed in Sanatana Dharma?

Meaning-
“That which is not born, does not die (a-jayamano) is born (vi-jayathe) as many different beings (bahudha).”

The above shloka is from the famous Purusha-Sukta which comes from the Rig-Veda times. Temple priests in India, even to date, sing this sukta during abhishekam to deities.
It’s important to understand the correct meaning of this shloka. When we read it first, we can encounter a paradox – How can something not born be born as different beings?
Are the Vedic scholars being poetic in their expression?No -Always the Vedic verses are precise in their expression, sometimes meanings subtle to grasp!!
Let us take the help of Chapter 11 of Bhagawat Gita to understand this concept.

When Lord Srikrishna gives the boon of Vishwarupa darshana to Arjuna, he is able is to see the universal form of the Divine Being, also referred to as Iswara (the word is not to be mistaken for Lord Shiva) – the universal being. It is described that Arjuna sees innumerable faces, hands, feet, eyes. This vision is an expression of the fact that the universal being is in all beings and that is what Arjuna is seeing in the divine form.

Lord Krishna’s universal form is nothing but the entire living & non-living beings. His body is seen as such by Arjuna, hence Arjuna describes his universal form as having innumerable hands, eyes, stomach, mouth and in all directions.

The Divinity or God-principle is understood as Sat-chit-ananda, existence-knowledge-bliss and is everywhere. This is known as the individual soul (atma) when we speak from the frame of reference of a living being. But, when you consider from a universal perspective, the entire universe is the body and the God principle is the universal soul (Iswara).
This also explains why Sanatana Dharma has multiple  expressions of deities celebrating existence of divine. In reality, it is just one God-principle that contains the entire energies in the universe. However, when the entire energy is split into individual components, this gives rise to a specific energy and are worshipped in different forms. For example, the energy that gives one the ability to study /comprehend is called Saraswati, the God of Learning and wealth is known as Goddess Lakshmi¸ the Goddess of wealth.