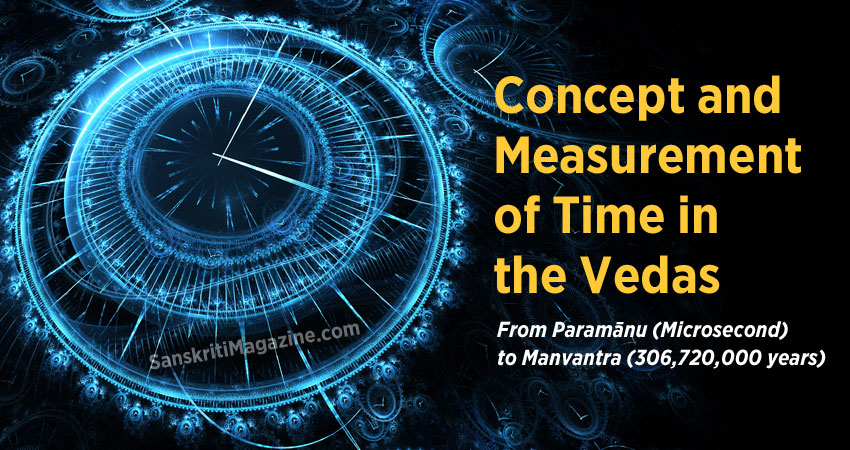 The concept of Time in the Vedic concept is an extremely intriguing and astonishing theory that even surpasses modern science.

Time has been measured from the largest possible notion of a Maha Yuga to the smallest measurable unit which is called Paramanu.  Time calculation has been described in details in the Vedas and Manusmriti as:

The Paksha on brighter lunar cycle days is for departed ancestors (Pitrus) and the darker lunar cycle is their night.  The days from January 15th to July 15th when the sun rises with an inclination towards North-East, are called Uttarayanam and considered to be a single day of Brahma.  The remaining 6 months when the sun rises with an inclination towards South-East are called Dakshinayanam are considered a single night of Brahma.   Lord Vishnu is believed to be asleep during Dakshinayanam and awake in Uttarayanam.  It is for this reason that 1 human year is considered to be 1 day of Brahma.

An epoch or a yuga is the next higher level of measurement and is broken down into the following:

One cycle of Yuga is called Maha Yuga which is 4.32 million solar years.  Yuganta, the day when Yuga gets over are also marked by the Hindu Calendar.

There have been a total of six Brahma in the past, present one is the seventh one, each having a life span of 100 years.  They are:

Lifetime of one Brahma is known as “Para” which is divided into two halves called “Parardham”.  The present Brahma has completed 50 years and is on the 1st day of his 51st year.  A year of Brahma is called a Kalpa and each kalpa has 14 Manvantaras.

Creation takes places during the Udaya Kalpas (days) of Brahma while he rests during the 14 Kshaya Kalpas (nights).  So far 6 Manvantaras ruled by 6 Manus have passed and we are going through the 7th one called Varaha Kalpa and Vaivasvata Manvantara.

Read more about the concept of Yuga or Epochs in Hinduism