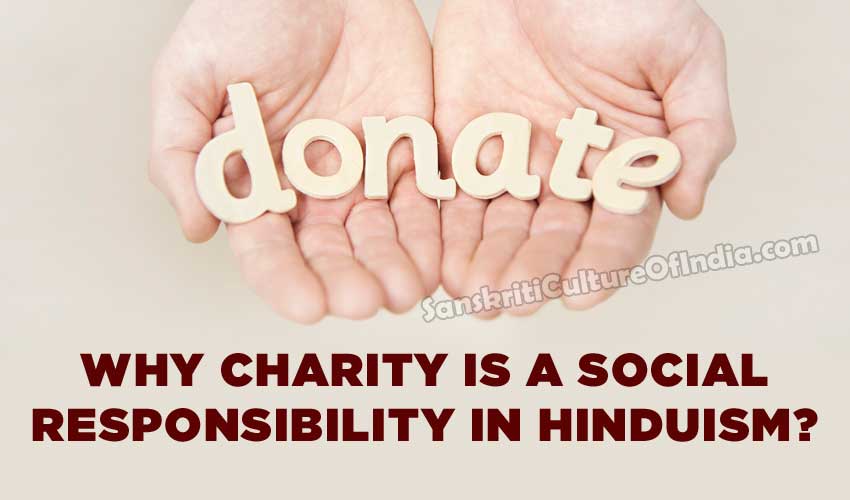 In the Rig-Veda, it is said that of all charities imparting knowledge is best. It cannot be stolen or destroyed. With time it grows and continues giving happiness to many people.

Hindu religious texts suggest that charity in differnt forms must be given on festivals and special occassions. This charity must be given happily with love and devotion. One should leave the fruit thereof to God.

In the Bhavishyapura, 151/18, it is said that three kinds of charity are particularly meritorious:

It is believed that the benefits continue for seven generations.

When a donor gives charity with love and devotion, and the benefactor receives it with the same sentiments, both the donor and benefactor go to heaven. When there is disrespect in giving or receiving, both go to hell. With whatever sentiments one gives charity, it returns in the same way.

No virtue accrues from charity that is given out of ill-gotten wealth. In giving charity out of duty it is important that one must adhere to morality and ethics.

“What is the best charity?” the Yaksh asked Yudhistra.

“That which is given to a deserving person,” Yudhistra said, “Charity must be given to a person who can put it to the best use. Only then is it virtuous.”

Hindu texts tell us that Karan gave his skin in charity, Shivi gave his flesh and Ddhichi gave his ashes. Of all donors, Karan shall forever be remembered for his charitable disposition.

When the gods could not kill the powerful Vritrasur, who was creating havoc everywhere, they were frightened. In desperation, the gods went to Brahma seeking a solution. They were told that only a weapon made from the ashes of an ascetic could kill Vritrasur. Ddhichi was the best known amongst the ascetics. When the gods led by Indra went to him and explained their predicament, he agreed to give up his body for the welfare of the gods. With ashes obtained through cremation of the body, the weapon was made and ultimately Vritrasur was killed.

Consecrate your life to the realization of something higher and broader than yourself and you will never feel the weight of the passing years.  ~ The Mother

One or many faces of Divinity
Significance & Importance of Sandhyavandanam
Comment