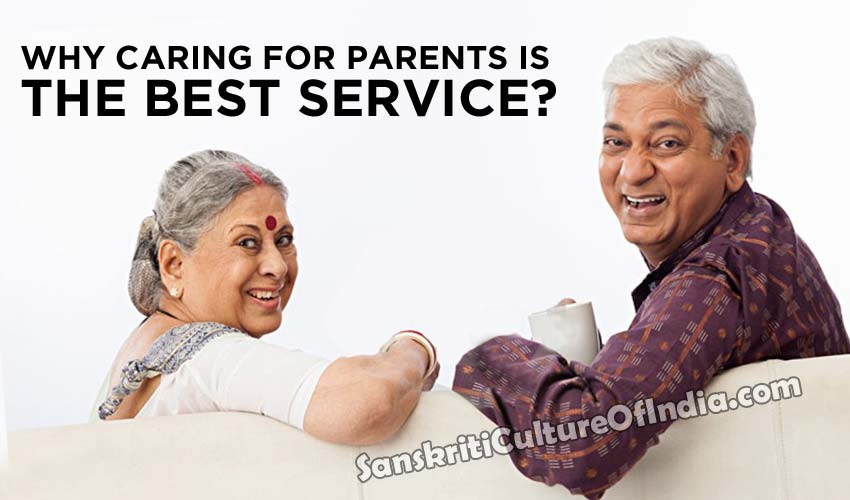 Service to parents is described as the best service in Hinduism. Religious text equate parents with gods. Amongst parents, the mother has been accorded a higher position than the father. The mother who gives birth and the motherland that sustains an individual are described as more outstanding than heaven.

In reality, a child is born of its father and mother. Since they are instrumental in giving the body to a child they are the first gods to the child. Since the mother rears the child in her womb for nine months, bearing the pains of carrying it and giving the child good thoughts through this period, parents are worth of reverence.

Rendering services to parents has been described as “pitra-rin” – a loan from the parents. It is the duty of every child to repay this loan or debt in adult life. Therefore, a son cannot refuse to get married. Sanyas or renunciation is also prohibited unless the son has settled this loan or debt.

A teacher has a significant role in imparting knowledge to a child. However, the mother has been specially commended as the first teacher of the child.

In Manusmriti, 2/145, the situation has been described as:

Parents who give birth and rear children face agony that cannot be overcome in a hundred years. Therefore, the father, mother and teacher must always be kept happy and content through care and service. This is important to attain truth and success in life.

In the Shivpuran, the importance of parents is described thus: 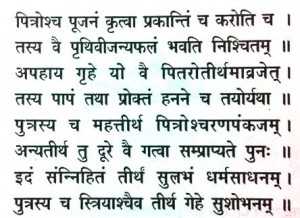 That son who reveres his father and mother wholeheartedly attains the fruit of having gone around the world. Whoever leaves them home and travels alone even though on pilgrimage sins as though he has killed his parents. For a son the feet of the parents are like a pilgrimage. To visit other pilgrimages one needs to travel long distances, this pilgrimage is close at hand. For the man the love and respect of his parents and for a woman the love and respect of her husband are the best pilgrimages available within the home.

In the religious texts, the best example of love and respect for parents one comes across is that of Shravan Kumar, who achieved immortality through his devotion. Lord Ram became an ideal son by honouring his father’s commitment and went in exile into the forests for 14 years. Motivated by the lives of great men and women one must always revere and look after parents to repay the debt of their having brought one into this world.

Is it not unfair to bind people to many responsibilities like those to teachers, parents and forefathes? Why can’t one decide what one wants to do or not?