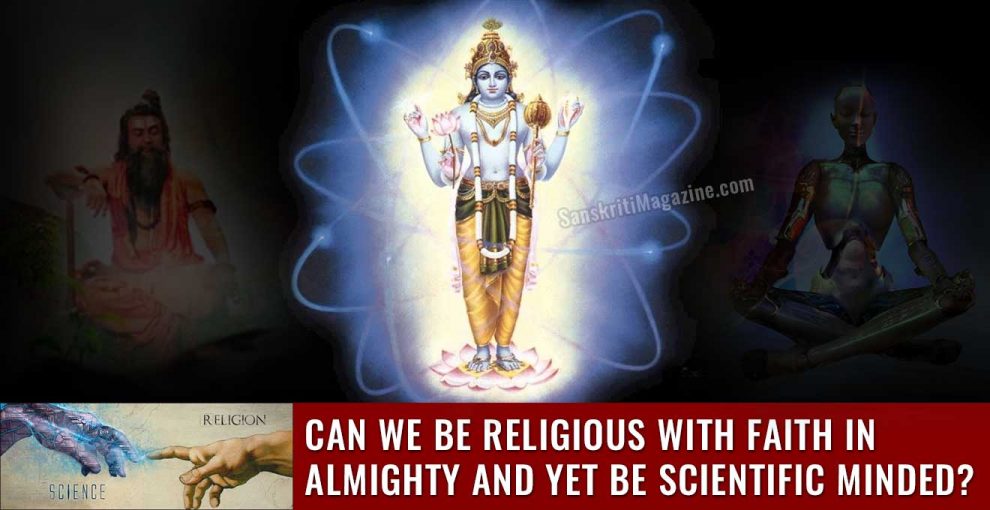 Yes, and it is even natural. One only needs to deeply reflect on what is meant by the Almighty.

If somebody grew up as a Christian or Muslim, he needs, however, to get rid of some notions about the Almighty which can never be proven and are in all likelihood not true – for example that He favours those who believe in a specific book (Bible, Quran) and sends all others to eternal hell and that he is a superhuman (male) creator, separate from humans, and that he made his will known only recently, not even 2000 years ago, and that the jury is still out (because two religions stake claim to it), to whom he has spoken the last world of the ‘only truth’… .

But Vedic wisdom can help to correct one’s view, as it had already long before Christianity and Islam appeared, a highly mature understanding of the ‘Almighty’:

The Rishis claim that everything in this creation including ourselves is permeated by the same great intelligence, like waves are permeated by the same ocean. The waves may be convinced that they are separate from the ocean as they have a distinct form and name. But ultimately all waves are nothing but the one great ocean and nothing is lost when their form is lost. Similarly, though we may consider our person as separate from others, in truth we are the one consciousness and nothing of substance is lost when form and name are lost.

Further, Indian Rishis claim that the apparent reality is not really real. It is a sense deception (maya), in a similar way, as at dusk a rope is mistaken to be a snake, even though in reality there is only a rope. Truly true is our inner being (Atman) that permeates everything. It means that in our essence, we are infinite, spread out all over as it were, eternal.

Now this ocean analogy sounds almost like modern physics. How come? Did the scientists discover that all is one energy independently or were their theories inspired by the Vedas? Had the scientists reflected on the profound insights of the Indian rishis?

Indeed this had been the case. The scientists who were responsible for replacing Newton’s paradigm of a universe full of separate things with an interconnected, homogeneous Whole were inspired by Vedanta: Heisenberg, Schroedinger, Pauli, Einstein, Oppenheimer, Tesla and others, all knew about and reflected on India’s ancient wisdom.

In contrast, dogmatic religions never fostered science. What sadder example can there be than the burning of the great Nalanda University library in present day Bihar by Islamic invaders in 1193 AD. The collected treasure of the best minds was turned into ash and thousands of students were brutally killed. Voltaire rightly said, “Those who can make you believe in absurdities can make you commit atrocities.”

Yet times are changing. The awareness that we would be better off without blind belief in irrational dogmas is growing. Christianity is losing its hold over its followers in the west. I just read that in Berlin, the capital of Germany, only 25 per cent of the inhabitants are still Christians. And Islam, though seemingly still on an upswing, is being scrutinised, too. The recent wide-spread protests in Iran point to the fact that not all believe what they are told to believe and even risk their lives for freedom.

So to come back to the question: belief in an Almighty Presence is not an obstacle to being a scientific minded person, but rather a help. It can help to even expand science. Here is why:

The truth is not something abstract, cold, and theoretical. It is the conscious, loving, intelligent essence in all from where thoughts emerge. True inspiration and intuition come from this level. Srinivasan Ramanujan, the great mathematician, would have touched this level from where he received amazing mathematical insights . He related to it as Devi Namagiri.

Many great scientists acknowledge an almighty intelligence as the cause for (or essence of) this universe. Einstein, too, acknowledged it. In a letter to a school girl, who asked him if scientists pray, he wrote: “Everyone who is seriously involved in the pursuit of science becomes convinced that some spirit is manifest in the laws of the universe, one that is vastly superior to that of man.”

This spirit level (Indians called it Atman) is within all of us. It is the Almighty and we are definitely better off if we acknowledge its presence and trust it. The Rishis advocate complete trust – after all, it is Almighty…

PS: a similar question ” How can I hold my faith in Almighty as well as being a scientific minded person?” was asked on Quora to which I replied. The above article is based on my reply.