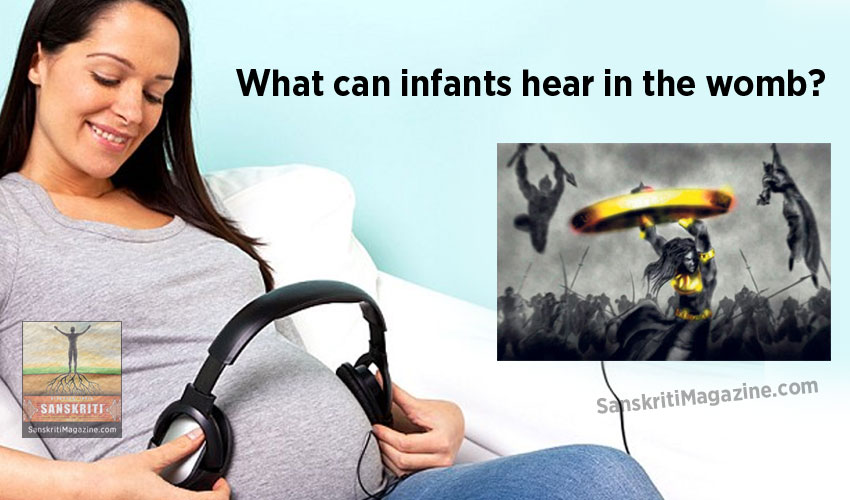 Auditory capacities develop significantly starting from the 10th week to the 35th week of pregnancy and beyond, but it is really in the third trimester that fetuses become newly aware of melodious sounds.

As the story goes in the ancient Hindu epic, Mahabharata, the strategies that Arjun relates to Subhadra while she is pregnant with their son, Abhimanyu, are absorbed and put into action years later by him on the battlefield. By Lord Krishna’s design, Subhadra falls asleep just before Arjun can finish his explanation of how one emerges victoriously from a particularly labyrinthine configuration, and this incomplete message is what ultimately leads to Abhimanyu’s tragic demise in the war.

This episode, however vague or vivid to you, brings to bear a centuries-old question that remains relevant today: What are infants capable of remembering from the womb? Ask a dozen South Asian parents this question, and you will probably get several different answers. Consequently, there is no shortage of cultural advice, beliefs, and as some call them –superstitions— defining the do’s and don’ts of pregnancy. Coupled with a parent’s desire to make the most of this opportune moment of development, science, smart marketing, and sheer anecdote can quickly become confused!

Researchers have now come to learn more specific information regarding the development of auditory capacities and whether related prenatal practices such as reading to baby and singing or playing music play a role in facilitating children’s outcomes.

A recent study found that infants have greater familiarity with vowels of a language they have been exclusively exposed to during the last ten weeks of pregnancy, compared to vowels of a language they have not heard¹. Although this probably makes intuitive sense, the findings indicate there is some learning that starts taking place (though at a rudimentary level) in utero.

Infants whose prenatal environments regularly include two or more languages have been understudied, but we can probably expect there to be more research in this area given the increasingly large number of children being born and raised in multilingual households around the world.

Prenatal exposure to music has received much more attention, thanks to advances in research technology and the upsurge of trendy products such as “Baby Mozart.” By the third trimester, infants can hear and respond to melodies and rhythms, and as happens to most individuals, loud noises startle the baby in utero, creating a “jump” response that mothers can feel too.²

So what happens when the same song is played repeatedly during the last trimester, and what does that mean for future development? Results are limited and mixed, but generally suggest at least a short-term memory for music that the infant was exposed to very regularly in the prenatal period (including TV show themes³ and mom’s top playlist picks).

One study even demonstrated that 4-month-olds were better at noticing modifications in “Twinkle Twinkle Little Star” after it had been played to them five times a week in the third trimester4. Since infants are not quite capable of “naming that tune,” researchers measure song recognition by gauging an infant’s physiological or neurological response to both familiar and unfamiliar songs. Singing can have similar effects for infants, and they may have a slight preference for lullabies and songs that were sung to them while in the womb.

The familiarity that infants develop with voices, music, and language prenatally are thought to be important in their abilities to engage in reciprocal non-verbal communication, which begins to blossom around two to three months, and is a precursor to their language and cognitive development.

Does this mean that pregnant women should drop what they’re doing immediately and schedule a regular routine of music listening, reading to baby, and verbal exchanges with their baby bump? Of course not. While these studies are groundbreaking in their own right, much of what they reinforce for us is the indisputable connection between the intrauterine environment, a mother’s health, and the physical and cultural context surrounding the developing baby.

A good marker to determine whether you should or shouldn’t engage in a specific practice that seems ‘trendy’ or ‘prescriptive’ according to the latest research is whether it is going to help you relax and truly bond with your baby, or if it will just lead to unnecessary stress in the long run. Unlike Abhimanyu’s tale, none of these practices alone will ‘make’ or ‘break’ your baby’s chances for success in life’s upcoming battles, and there is plenty of time following birth for your little one’s ears to take in the symphonies, lingua franca, and your professions of love.

Ignorance about Lord Ram in the name of Secularism
Five Dharmic Debts (Rin) of Every Hindu – Have you paid yours ?
Comment