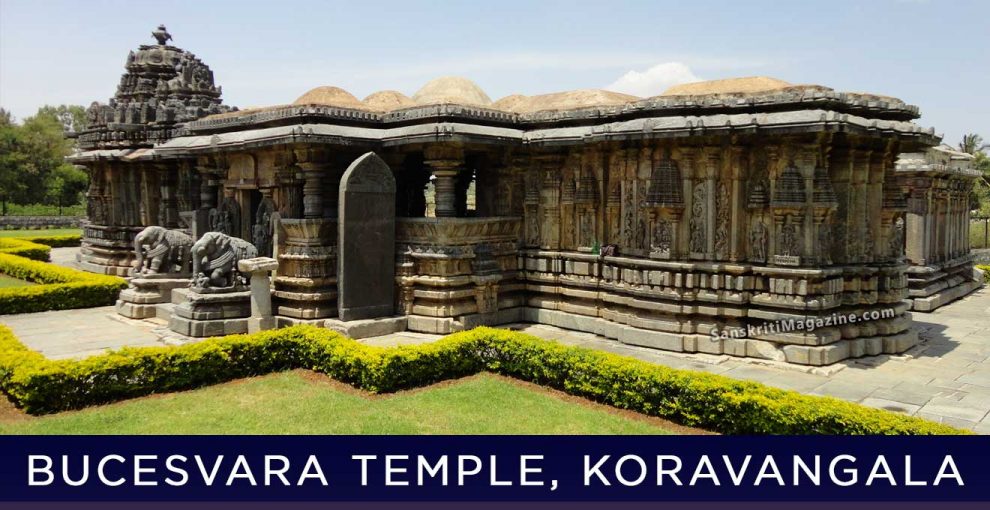 The Bucesvara temple (also spelt Bucheshwara or Bucheshvara) is a simple yet elegant specimen of 12th century of Hoysala architecture. It is located in the village of Korvangla, 10 km from Hassan city, in Hassan district or Karnataka state, India. The temple was built in 1173 A.D. by a rich officer called Buci (or Buchiraja), to celebrate the coronation of Hoysala King Veera Ballala II. Nearby are two more temples that are in ruins. From the inscriptions on the premises, it is evident that these two temples had been commissioned by Buci’s older brothers, Govinda and Naka. This temple is protected as a monument of national importance by the Archaeological Survey of India. 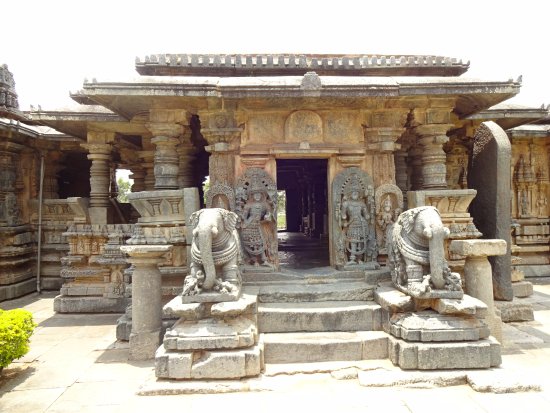 By plan, the temple is a divikuta (two shrines) that face each other. These shrines are connected by a closed mantapa (hall) and an open mantapa. Consequently, one shrine appears much dimmer in lighting than the other. At the eastern end of the complex is a small shrine whose deity is the Bhairava, a form of the Hindu god Shiva.

The western shrine facing the east, containing an image of Surya (the Sun god in Hinduism) has a staggered square plan (also called “cross in square”, a square with three projections per side, its kalasa (decorative water-pot on top of the tower over the shrine, and Hoysala crest (warrior stabbing a lion) are intact, and the decorative features on the shikhara (tower over shrine) and the outer walls are “conventional” by Hoysala standards. 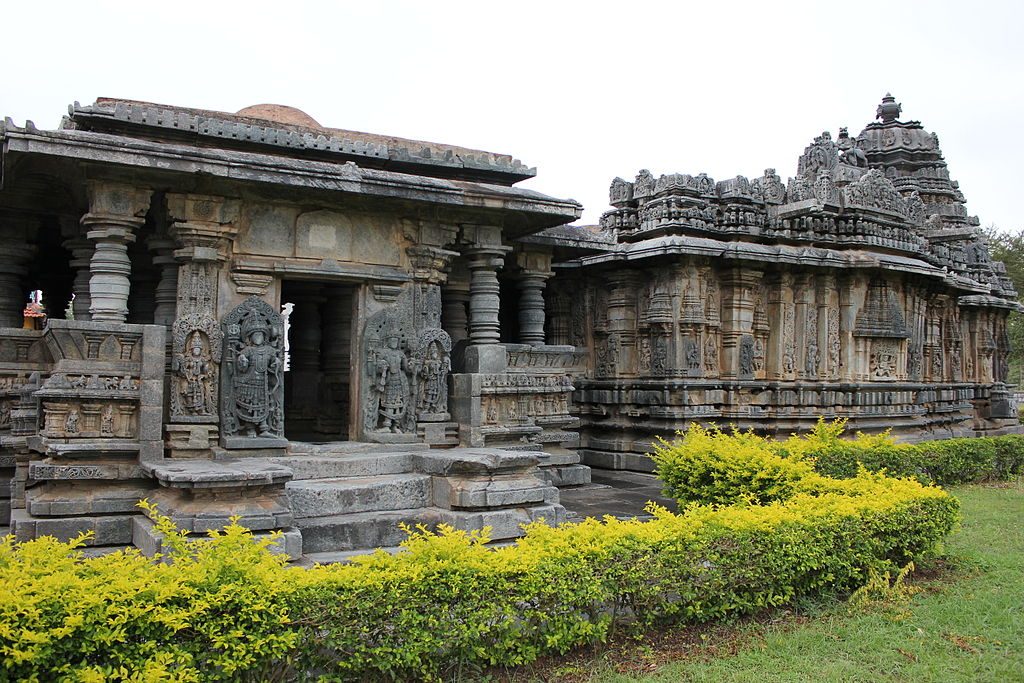 The eastern shrine, which contains a linga (the universal symbol of the Hindu god Shiva) has a similar plan; a Sukhanasi (called “nose”) which is a low protrusion of the tower over the shrine and is built over the vestibule which connects the vimana (cella) to the hall. However its main tower is missing and it is unclear if the tower was a part of the original plan or not.

The temple decorative features can be said to belong to the “old kind” prevalent even before the Hoysala times. In this type of decoration, below the superstructure (tower), an eaves that projects about half a meter runs all around the temple. Below the eaves are decorative miniature towers (the aedicula) on pilasters. The miniature towers (turrets) are in various styles; nagara, dravida, vesara, and bhumija. In the “old kind”, the large wall images of deities and their attendants are placed below these decorative towers. 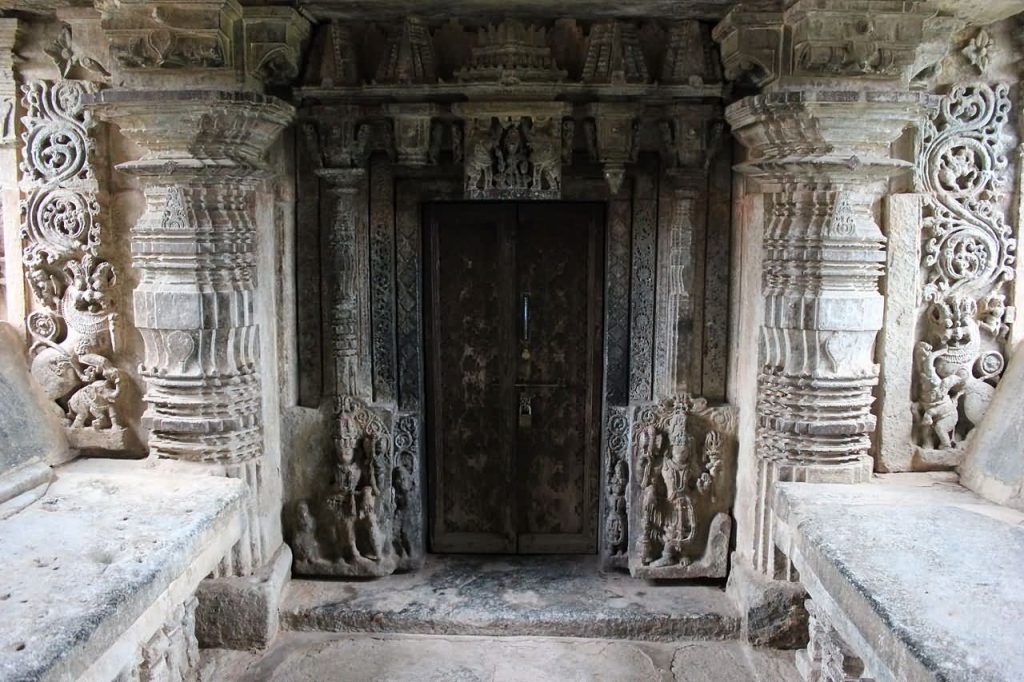 These images include among others; Bhairava (a version of the god Shiva), the goddess Saraswati and Durga, Maheshvara, Narasimha, Brahma, and Venugopala. Below these images, the base of the wall comprises five different horizontal moldings, one of which is a row of blocks.

The halls are adjoining. The closed hall is complete in design but the open hall is not. It has no structure above its eaves (due to the missing tower) and provides two side entrances into the temple, the southern entrance being flanked by two small elephant balustrades. The outer wall of the closed hall has, in addition to usual Hindu iconography, some unusual reliefs, depicting animals devouring animals. The ceiling art in the open hall is of fine quality and the pillars have a glossy finish. The pillars of the mantapa (hall) are bell shaped, a design achieved by turning with lathes. 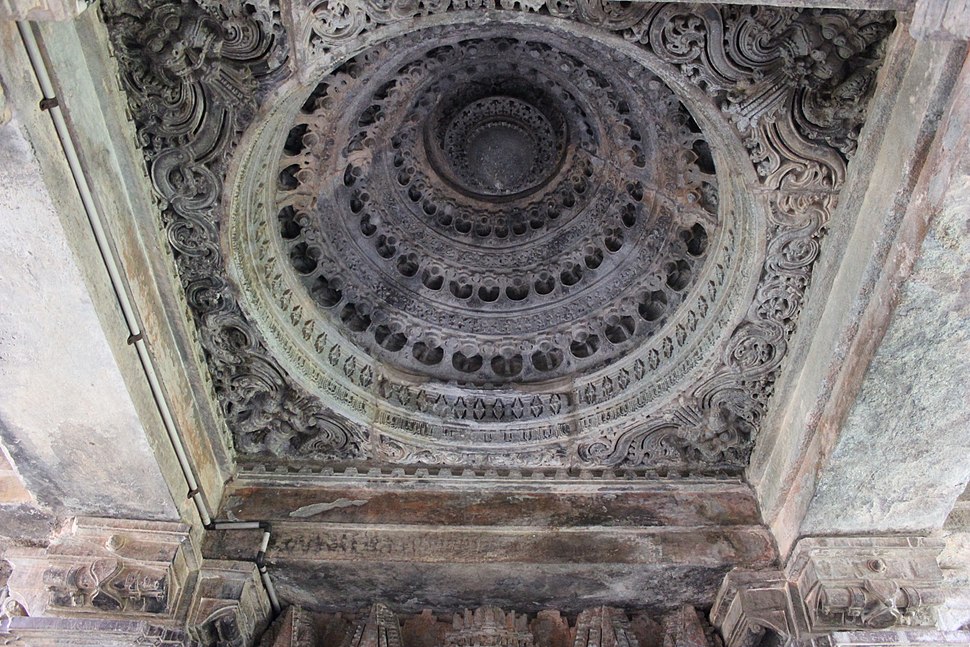 Are there really 1131 Vedas? Breaking the myth
The Vedic Shakhas: summary classification by which the Vedic knowledge has been passed.
Comment