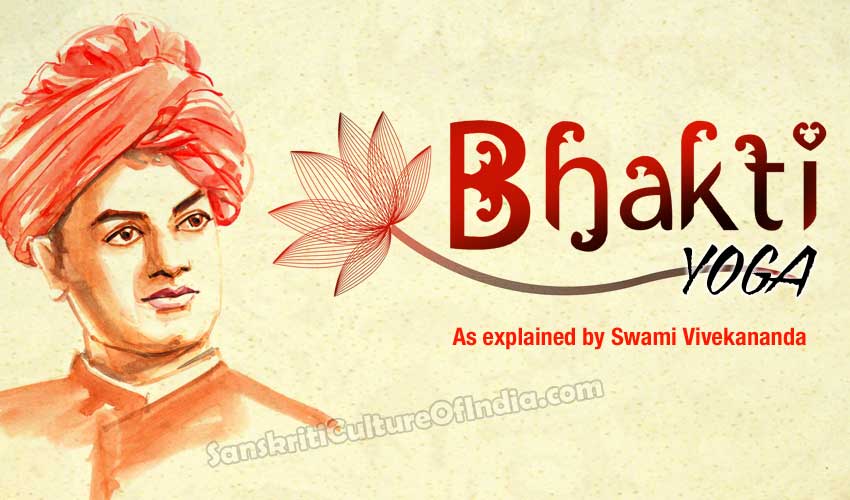 Bhakti Yoga is a real, genuine search after the Lord, a search beginning, continuing, and ending in Love. One single moment of the madness of extreme love to God brings us eternal freedom. “Bhakti,” says Nârada in his explanation of the Bhakti-aphorisms, “is intense love to God.”—“When a man gets it, he loves all, hates none; he becomes satisfied for ever.”—“This love cannot be reduced to any earthly benefit,” because so long as worldly desires last, that kind of love does not come. “Bhakti is greater than Karma, greater than Yoga, because these are intended for an object in view, while Bhakti is its own fruition, its own means, and its own end.”

Bhakti has been the one constant theme of our sages. Apart from the special writers on Bhakti, such as Shândilya or Nârada, the great commentators on the Vyâsa-Sutras, evidently advocates of Knowledge (Jnâna), have also something very suggestive to say about Love. Even when the commentator is anxious to explain many, if not all, of the texts so as to make them import a sort of dry knowledge, the Sutras, in the chapter on worship especially, do not lend themselves to be easily manipulated in that fashion. There is not really so much difference between Knowledge (Jnana) and Love (Bhakti) as people sometimes imagine. We shall see as we go on, that in the end they converge and meet at the same point. So also is it with Raja-Yoga, which, when pursued as a means to attain liberation, and not ( as unfortunately it frequently becomes in the hands of charlatans and mystery-mongers) as an instrument to hoodwink the unwary, leads us also to the same goal.

The one great advantage of Bhakti is that it is the easiest, and the most natural way to reach the great divine end in view; its great disadvantage is that in its lower forms it oftentimes degenerates into hideous fanaticism. The fanatical crew in Hinduism, or Mohammedanism, or Christianity, have always been almost exclusively recruited from these worshippers on the lower planes of Bhakti. That singleness of attachment (Nishthâ) to a loved object, without which no genuine love can grow, is very often also the cause

of the denunciation of everything else. All the weak and undeveloped minds in every religion or country have only one way of loving their own ideal, i.e. by hating every other ideal. Herein is the explanation of why the same man who is so lovingly attached to his own ideal of God, so devoted to his own ideal of religion, becomes a howling fanatic as soon as he sees or hears anything of any other ideal. This kind of love is somewhat like the canine instinct of guarding the master’s property from intrusion; only, the instinct of the dog is better than the reason of man, for the dog never mistakes its master for an enemy in whatever dress he may come before it. Again, the fanatic loses all power of judgement. Personal considerations are in his case of such absorbing interest that to him it is no right or wrong; but the one thing he is always particularly careful to know is, who says it. The same man who is kind, good, honest, and loving to people of his own opinion, will not hesitate to do the vilest deeds, when they are directed against persons beyond the pale of his own religious brotherhood.

But this danger exists only in that stage of Bhakti called the preparatory (गोणी) When Bhakti has become ripe and has passed into that form which is caned the supreme (परा), no more is there any fear of these hideous manifestations of fanaticism; that soul which is overpowered by this higher form of Bhakti is too near the God of Love to become an instrument for the diffusion of hatred. It is not given to all of us to be harmonious in the building up of our characters in this life: yet we know that that character is of the noblest type in which all these three—knowledge and love and Yoga—are harmoniously fused. Three things are necessary for a bird to fly—the two wings and the tail as a rudder for steering. Jnâna (knowledge) is the one wing, Bhakti (love) is the other, and Yoga is the tail that keeps up the balance. For those who cannot pursue all these three forms of worship together in harmony, and take up, therefore, Bhakti alone as their way, it is necessary always to remember that forms and ceremonials, though absolutely necessary for the progressive soul, have no other value than taking us on to that state in which we feel the most intense love to God.

There is a little difference in opinion between the teachers of knowledge and those of love, though both admit the power of Bhakti. The Jnânis hold Bhakti to be an instrument of liberation; the Bhaktas (devotees) look upon it both as the instrument and the thing to be attained. To my mind this is a distinction without much difference. In fact, Bhakti, when used as an instrument, really means a lower form of worship, and the higher form becomes inseparable from the lower form of realisation at a later stage. Each seems to lay a great stress upon his own peculiar method of worship, forgetting that with perfect love true knowledge is bound to come even unsought, and that from perfect knowledge true love is inseparable.

Bearing this in mind, let us try to understand what the great Vedantic commentators have to say on the subject. In explaining the SutraAaìiÄrs³dpdezat‰(Âvrittirasakridupadeshat), Bhagavan Shankara says, “Thus people say, ‘He is devoted to the king, he is devoted to the Guru’; they say this of him who follows his Guru, and does so, having that following as the one end in view. Similarly they say, ‘The loving wife meditates on her loving husband’; here also a kind of eager and, continuous remembrance is meant.” This is devotion according to Shankara.

Meditation again is a constant remembrance (of the thing meditated upon), flowing like an unbroken stream of oil poured out from one vessel to another. When this kind of remembering has been attained (in relation to God) all bondages break. Thus it is spoken of in the scriptures regarding constant remembering as a means to liberation. This remembering again is of the same form as seeing, because it is of the same meaning as in the passage, ‘When He who is far and near is seen, the bonds of the heart are broken, all doubts vanish, and all effects of work disappear.’ He who is near can be seen, but he who is far can only be remembered. Nevertheless, the scripture says that we have to see Him who is near as well as Him who is far, indicating to us that the above kind of remembering is as good as seeing. This remembrance when exalted assumes the same form as seeing. Worship is constant remembering as may be seen from the essential texts of scriptures. Knowing, which is the same as repeated worship, has been described as constant emembering. . . . Thus the memory, which has attained to the height of what is as good as direct perception, is spoken of in the Shruti as a means of liberation. ‘This Âtman is not to be reached through various sciences, nor by intellect, nor by much study of the Vedas. Whomsoever this Âtman desires, by him is the Âtman attained, unto him this Âtman discovers Himself.’ Here, after saying that mere hearing, thinking, and meditating are not the the means of attaining this Âtman, it is said, ‘Whom this Âtman desires, by him the Âtman is attained.’ The extremely beloved is desired; by whomsoever this Âtman is extremely beloved; he becomes the most beloved of the Âtman. So that this beloved may attain the Âtman, the LordHimself helps. For it has been said by the Lord:

‘Those who are constantly attached to Me and worship Me with love—I give that direction to their will by which they come to Me.’ Therefore it is said that, to whomsoever this remember ing, which is of the same form as direct perception, is very dear, because it is dear to the Object of such memory-perception, he is desired by the Supreme Âtman, by him the Supreme Âtman is attained. This constant remembrance is denoted by the word Bhakti.” So says Bhagavân Râmânuja in his commentary on the Sutra.