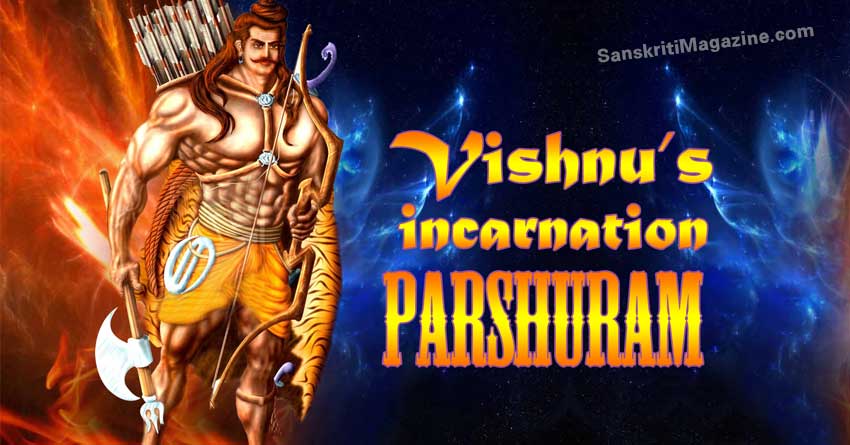 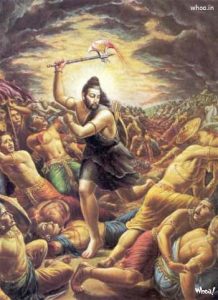 f there ever was any an aggressive incarnation of Lord Vishnu then it has to be that of Parashurama. He is considered as the 6th of the dasavatara or incarnations of Vishnu to have come on earth. Normally according to the Vedas the class of Brahmanas (priests) and Kshatriyas (warriors) are distinct. But Parashurama took up fighting to avenge his father’s death despite being born as a brahmana.

Generally brahmanas indulge in knowledge, preaching and religious rituals. The Kshatriyas are known to protect the state and engage in military work. In the case of Parashurama, he seems to have the combined qualities of the two castes. He was a saint and a warrior and performed both the duties. The Puranas and both the epics mention his role in many deadly battles.

Parashurama is most known for ridding the world of kshatriyas twenty-one times over after the mighty king Kartavirya Arjuna killed his father. He plays important roles in the Mahabharata and Ramayana, serving as mentor to Bhishma, Drona and Karna.

Parashurama and Indrajit (Ravana’s son) are believed to be the only humans who ever possessed the three ultimate weapons: the Brahmanda astra, Vaishnava astra and Pashupatastra. Parashurama was a disciple of Shiva and learned the scriptures and the arts of warfare from Shiva. He then acquired celestial weapons from Shiva and the other gods on Shiva’s instructions. Shiva personally trained Parashurama for decades in the art of warfare.The Bhargavastra was his personal celestial weapon and vijaya was his personal bow which was gifted by Shiva. Parashurama also fought back the advancing seas to save the lands of Konkan and Kerala.

The Story of Lord Parashurama

It was in the 19th part of the Treta Yug, this incarnation makes the appearance. His father is Saptrishi Jamadagni is from the priestly class (Brighu dynasty) and mother is called Renuka. She is from the Kshatriya family. Her clan was called Suryavanshi, and she was a descendent of the rulers of Ayodhya, principal of whom was King Ram. She was spiritual and was of the water element. She could get water in pots made of wet clay. Jamadagni was of fire element has he been always of a definite purpose. As an austere Brahmin Parashurama he had done penance and prayed to Lord Shiva. In a boon he got an axe. This also signals the start of the metal age in evolution of the Creation. He did not kill all Kshatriyas but only the evil rulers.

It is said that a ruler named Kartavirya Arjun paid a visit to Parashurama’s father’s ashram in the forest near river Narmada. Since it was the royal party the saint fed them well. How did he manage with a merge income and that too in a forest? The king noticed that the reason was a cow! Her name was Kamadhenu and she was wish-fulfilling cow. He was a gifted cow and could almost produce anything that the saint desired. She was divine and belonged to the saint. The king asked that the cow be given to him. Obviously, the saint refused to part with the animal. The King could not take the refusal kindly. He destroyed the ashram and also forcibly took away the cow and her calf. All this happened in Parashurama’s absence.

When Jamadagni’s son Parashurama got to know about this calamity that had taken place, he went in perfect rage to the king with the same intention-to destroy the ruler and the army. Kartavirya’s son Haihayas had to take revenge and they beheaded sage Jamadagni. In his fierce antagonism Parashurama took a vow that he would kill every Kshatriya who would come in his path. He also said they would be killed on earth 21 times over (as his father was inflicted with 21 arrows) and he would fill at least five lakes with their blood. There was no stopping for the rage and destruction created by Parashurama. It was his grandfather who was sage Ruchika who asked him to stop the blood bath and killing of the warriors. It is said that Parashurama cooled his fire and he decided to undergone penance again. He is a Chiranjivi and is fulfilling his penance at Mahendragiri Mountain.

Parashurama set on a mission to encircle the earth 21 times> After the last battle of Samantpanchak he washed his blood soaked axe and laid it down only to return in the next battle of destroying evil kings. While he encircled earth he established 108 sites of pilgrimage with his divine energy. These divine energies are called Kshetrapaldevatas.

Parashurama’s Role in the Hindu Epics

The fiery incarnation’s name is derived from the word ‘parasu (axe). Thus he is called Parashurama. He had two of the most dangerous weapons bows named Shiva dhanush and Vishnu dhanush. Both the bows came with a lot of austerity from his side. Lord Shiva granted the Shiva dhanush to him. The same bow later was handed over to King Janka, the father of Sita who was to wed in a swayamvar. The bow was a part of a deal for the princes who wanted her hand in marriage. Only Lord Rama was able to fulfill and string the bow and marry her. 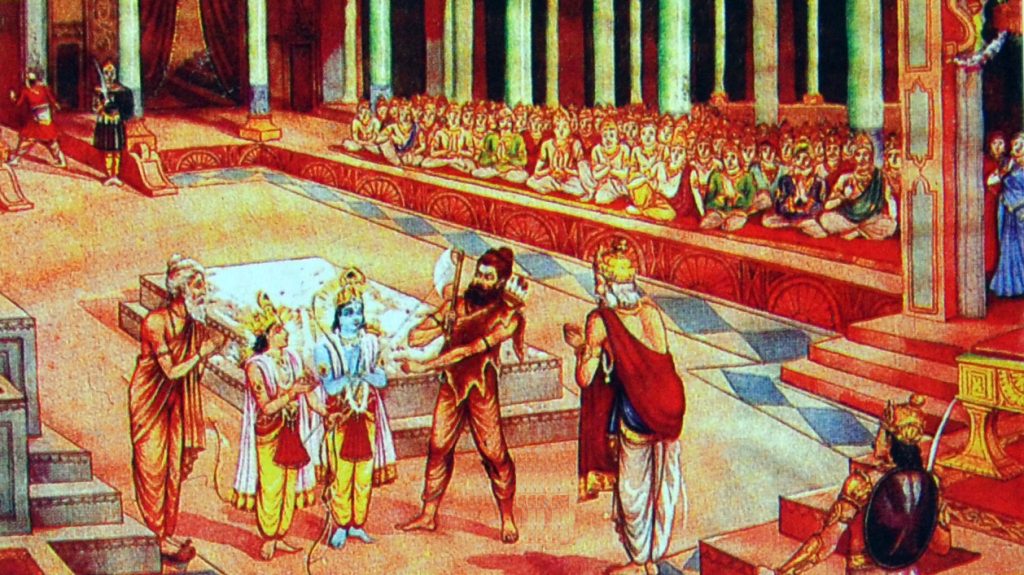 The Vishnu Dhanush was the other powerful arsenal that was used to bring back Sita from the clutches of Ravana. Parashurama was aware that this bow was going to be used in the war. He challenged Lord Ram if he would be able to break the bow as he did for the marriage. When Lord Ram managed to do it and string the bow, he asked Parashurama who is the next target. With this act Parashurama knew that Lord Ram was equally powerful and he left Him with the stringed Vishnu dhanush. This was the bow that eventually killed Ravana and he was able to rescue his wife Sita.

In the Mahabharat, Parashurama is once again mentioned. He gets his due connected to the battlefield in Kurukshetra. He was able to decide on the result of this great war. Karna who was on Duryodhana’s side had lied to the great Parashurama that he was a Brahmin. He wanted to learn the skills of weaponry and become battle ready. That is how he became the pupil of the Brahmin-warrior. There is an incidence connected to the time he was being given lessons. Parashurama was lying down on the lap of Karna and a bee stung the latter. It was also poisonous. He bore the pain and did not disturb his guru who was resting. But the guru woke up to see blood trickling out of the sting. He understood that only a Kshatriya was able to tolerate such pain. He was angered because Karna had lied to him. He cursed the disciple that when he needed the knowledge of Brahmastra the most, it would be erased from his mind.

Karna was on the verge of winning the war against the Pandavas. But his memory failed and he was unable to fight. He forgot all that he learnt and as a result the war was lost by the Kauravas.

Women Are Born Managers And Leaders
Spiritual side of fierce Goddess Bhairavi, the Goddess of wisdom
Comment