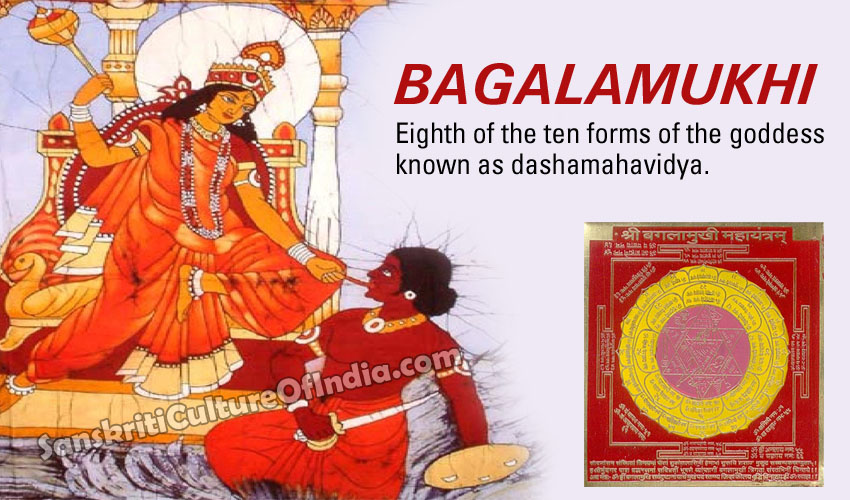 There is nothing like a Goddess scorned. And in case of Bagalamukhi (called the One who checks the mouth), she can be a towering personality to behold. While she protects her devotees, she can be the face of evil in case of any wrong doer. She is the eighth of the ten forms of the goddess known as dashamahavidya. Some ancient scriptures also call her crane faced. She is focused on her intent and gaze like the crane who waddles in the waters looking at its target. Those who pray to her whole heartedly, get the same kind of physiognomies to silence their enemies. But they can be granted their wish only when they are able to fulfill the rituals and manage to appease her long enough to grant a blessing.

It is not only her crane face that is identified as her main feature. She is called Peetambari devi or Brahmastra Roopini in some of the northern regions of India. This is because she wears yellow colored clothes and has a golden aura around her. Her throne is also made of yellow lotuses. She has a crescent shaped moon on her head. In some images she is shown having two arms and in some she is four armed. In west Bengal her worshippers see her as a demon slaying demi goddess. She carries a club in her right hand and looks ferocious. With her left hand she is puling out the demon’s tongue. With this image one knows that the Goddess is capable of quashing her adversaries and has the ability to paralyze them completely. In a way her powers are such that a person who uses speech for evil doing is made silent. She can overturn failure into success. And in a metaphysical way she can also reveal the significance of life in death. She can transform defeat into victory for her followers.

Goddess Bagalamukhi is a perfect example of duality – the ying and yang. One can easily find peace and balance in lie following her principles. In a more metaphysical way she embodies the consummation of the unborn into the uncreated.

Legends about the Goddess

Every God and Goddess is associated with some legend. How Goddess Bagalamukhi came to earth is an interesting tale. Eons ago there was a raging storm on earth. It was so strong that it would have wiped out all creation from it. The Gods were perturbed and held an emergency council to stop the flooding and destruction of Mother Earth. The meeting was apparently held in Saurastra (western India). The storm had to be weakened. From the Haridra Sarovar emerged the form of Goddess Bagalamukhi. This event has been faithfully recorded in the scriptures of Peetambari Peeth in Madhya Pradesh. As the power of the Goddess grew she assumed responsibility for her followers. They started to dedicate temples for her.

Temples in her honor

The most important shrine of the Goddess is in Guwahati in Assam. The temple is very close to Kamakhya where high ranked tantrics meet. She is also worshipped in Newar city (Patan, Nepal), Bankhandi (Himachal Pradesh), Peetambar Peeth (Datia, MP) and Nalkheda (Shajapur, MP).

How the Goddess blesses her followers

Most of the deeper religious texts in Hinduism deal with Tantra either in the dualistic or non-dualistic forms. An ordinary mortal identifies himself as a dualistic entity. They are different from the universe or any other form of divinity. In the higher stage, the duality is no longer existent. Now there is no separation between the divine and the mortal being. They are One. The followers of the Goddess have gone beyond the stage of duality and have become One with her. The use of the potent mantra is used to silence their critics and enemies alike. The hypnotic gaze and power of Stambhana (paralysis) allows things to be balanced.

For the neophyte, non-dualistic followers the enemy is the ego. This called for ‘sadhana’ or meditation. It develops the follower into a more stronger being. With the continuous chanting of the mantra the breath is regulated and it is easier to get self-realization. This is the strength of the mantra. There are many other spiritual benefits that Her devotees get.

Goddess Bagalamukhi is pleased when she is respected and followed in the right manner. The correct recitation of the mantra has many benefits. It helps one to conquer the internal demons and external adversaries too. Mortal human beings suffer due to greed, lust, pride, enmity, and different attachments. Some relationships become toxic. Most humans forget that the goal of life is to get liberated eventually. Only the practice of meditation and regime of sadhana are useful to get self-realized. This way the cycle of birth and death are reduced. It is said that even Lord Krishna and his Pandava friend Arjun worshipped her.

It is not easy to seek self-realization alone. The help of the guru is vital in this achievement. Even before starting the mantra jap, proper initiation is important. With the right kind of devotion to the Goddess, the soul moves on the path of enlightenment with guidance. As the kundalini rises, so does the soul.

It is believe that devotees of Bagalamukhi are protected from black magic, curse done by others, legal problems, possibility of accidents, adverse incidents, unnatural events, enemy’s mal-intention, disease and poverty.

We seek the help of God only when we are in trouble. With the divine intervention of Ma Bagalamukhi, the troubles are reduced. When a person has a malefic intent of Mars in the birth chart or an antardasa (specific period of suffering), then they can do the pooja of this Goddess. The pooja helps in overcoming the difficulties in the form of obstacles, enemies or severe problems in personal and professional life. It is also a protective gear for accidents, unnatural events and other disastrous which are life threatening.

Mantra for the Goddess Bagalamukhi:

Oh Goddess,
paralyse the speech
and feet of all evil people.
Pull their tongue,
destroy their intellect.