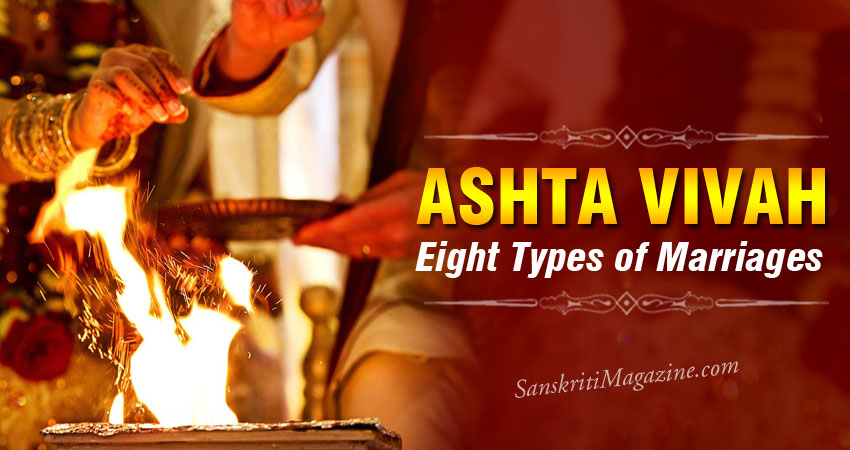 Vivah is a Sanskrit word used to describe a marriage according to Vedic traditions.  Marriage is viewed as one of the sacraments that is a binding commitment between a husband and wife for life.  Marriages are considered to be made in heaven which is then sanctified by fire during the wedding ceremony.

Marriage joins two families together in a strong bond that results in the procreation and nurturing of future generation which then influences the social and cultural growth of the society.  Society acknowledges this larger concept of the bond and hence marriages were carefully arranged for a better future for everyone involved.

There are eight different types of Hindu marriages according to Manusmriti, the law of Manu although not all of them have religious sanction.  These marriages are:

Considered to be the best marriage where the boy and girl belonged to same varna and came belonged to good families.  Brahmacharya Asharm should be completed by the boy prior to the wedding and there is no dowry involved.  All that the girl brings with her are two sets of clothing and some ornaments.  It is the boy’s family that approaches the girl’s and the proper ritual of kanyadaan is performed by the bride’s father.

Identical to Brahma Vivaah in all aspects except the bride is given away to the groom’s father as a gift.  Both the bride and groom are young and although the wedding ceremony may take place, the marriage is not consummated for several years until they mature.  The protection of the girl is handed over from her father to the groom’s father in a hand-receiving ceremony called Panigrahan.

It was customary for kings and other well off people to hold religious ceremonies where they would give out gifts and perform charities to benefit Brahmins and the poor.  During this time, a poor person could approach them and request that they wed his daughter off.  This type of marriage would take place if the girl’s parents were unable to either find a groom for her or couldn’t afford the expense involved in such a wedding.  The girl would then be married off to any man willing to accept her as his wife.

Dharmashastra prefers that this sort of marriage be avoided but it is still a respectable form of wedding as the parents are not to be blamed for their misfortune of being poverty-struck.

This type of wedding was performed in certain communities and was considered unfitting in the general society.   The groom’s family would have to pay bride price or kanya-shulkam to the parents of the bride and in nearly all cases, the man would willingly pay this price.  Certain texts prescribed bride-price as a cow with a calf and a pair of bulls.  The weddings of Dasharatha-Kaikeyi and Pandu-Madri are a perfect example of Arsha Vivaah.

In this type of marriage the groom is not suitable for the bride at all but is willing to give away as much of his wealth as he can afford to the bride’s family.  In contrast to Arsha Vivaah where cows are given as gift, Asura Vivaah has no such limitations.

This is a love marriage between a man and a woman without the consent of their families.

When a girl is willing to marry the boy but her family is against the marriage, the girl may be abducted and married only if she is willing to this alliance.  If the girl is abducted without her approval, it is simply treated as a case of abduction and rape and the puranas and shastras speak of consequent vengeance and retribution.  Examples of such marriages are those of Krishna-Rukmini and Arjuna-Subhadra.

When the bride is intoxicated or not in a conscious state of mind and is unwillingly married off, it is called Paischacha Vivaah and is outlawed by Manu.

The last four marriages were not religiously defined but were rather condemned in the society.

Puranas in Indian Samskriti: Part 1
Why are there no Temples of Brahma?
Comment