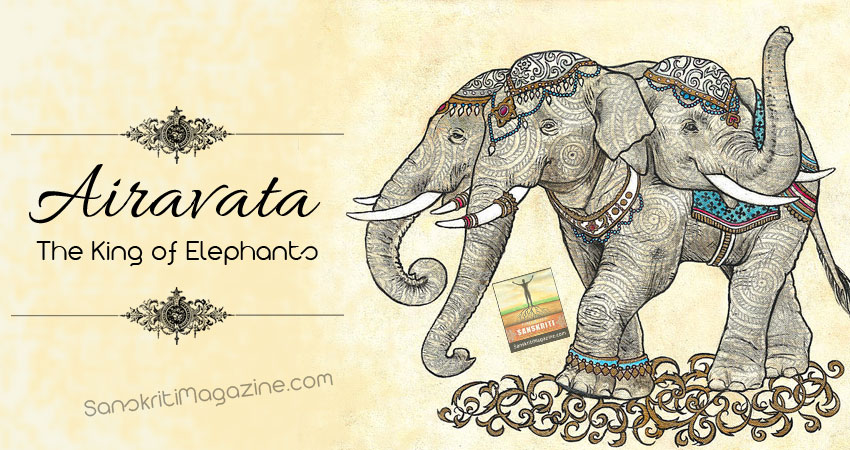 Airavata, the white elephant and the king-god of elephants is the mount of Indra.

According to legend, Airavata emerged from the waters during the process of Samudramanthan, the churning of the ocean of milk.  His name is derived from the word Iravat, signifying one who is produced from water.  His wife is Abharamu.

In Ramayana, Airavata’s mother was Iravati while according to Matangalila, he was born when Brahma sang seven sacred hymns over two halves of the egg shell from which Garuda hatched, followed by eight elephants including Airavata from the right and eight elephant calves emerged from the left.

Airavata is also known by the following names:

One of his names means “the one who knits or binds the clouds”, hence the myth that elephants are capable of producing clouds.  When Indra defeated Vritra, Airavata reached down to the watery underworld with his trunk, sucked up the water and sprayed it into the clouds.  Indra then caused cool water to rain down, thereby linking the waters of the sky to those of the underworld.

According to Vishnu Purana, Airavata has four tusks, seven trunks and is pure white in colour.  He was made the king of all elephants by Prithu.

The elephant also symbolizes the mount of each one of the eight guardian deities who preside over the eight points – four cardinal and four intermediate – of the compass.  They are:

Each of these deities has an elephant who takes part in the defence and protection of the allotted quarter.  There is reference to Airavata in the Bhagavad Gita:

“Of horses, know Me to be the nectar-born Ucchaisravas; of lordly elephants, Airavata and of men, the monarch.”  (10.27)

Another interesting myth is that all the elephants initially had wings and that they could fly in the skies.  Once, one of the flying elephants descended heavily on a tree under which a sage was meditating.  The branches of the tree broke, disturbing the sage who lay a curse upon all elephants that they lose their wings.

At Darasuram near Kumbakonam, in Tamil Nadu is a temple where it is believed that Airavata worshiped the Lingam which was thereafter, named Airavateswara. Rich in rare Dravidian sculpture and architectural workmanship, this temple was built by Rajaraja Chola II (1146-73).

Lord Shiva is known here as Airavateshwara, because he was worshiped at the temple by Airavata.  While suffering from a change of colour due to a curse from Sage Durvasa, Airavata had his colours restored by bathing in the sacred waters of the temple. In commemoration of this action, an image of Airavata with a seated Indra is found in an inner shrine.

It is said that Yama, the King of Death, also worshipped Shiva here. Also suffering under a Rishi’s curse, Yama had a burning sensation all over his body and was cured by the presiding deity Airavateswarar. Yama took a bath in the sacred tank which rid him of the burning sensation, and since then, the tank has been known as Yamateertham.

Airavata is known as Erawan in Thailand where he is depicted as a huge elephant with three and sometimes 33 heads.   He is also associated with the old Lao Kingdom of Lan Xang and the ancient kingdom of Laos, pictured on their Royal Flag.

The cult of the white elephant as sacred deities is widely practiced in some other parts of Asia including Burma.