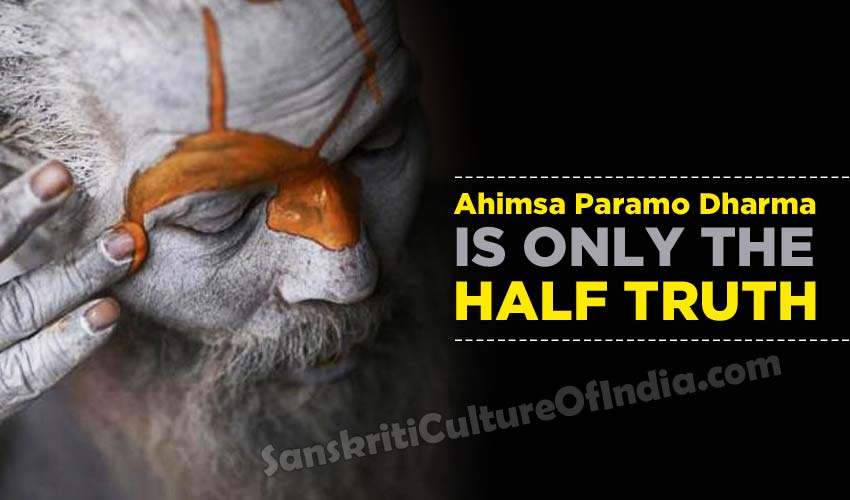 A Sanskrit phrase largely popularized by Gandhi and is repeated by many across the world today to emphasise on Non-Violence.

The phrase was first used in Mahabharata and literally means “non-violence is the ultimate duty” to the extent that it supersedes all other duties.

For someone following this practice, it means that there is no selective application of practice of ahimsa. It must be applied to each and everything related to their lives, leading to an unconditional and unilateral abandonment of violent resistance under any and all circumstances.  Yet, this is true only in the philosophy and strict practitioners of Buddhism and Jainism.

Many of us are so familiar with this phrase that we do not realize that it is only the half-truth.  The full phrase in Mahabharata is:

Non-violence is the ultimate dharma.
So too is violence in service of Dharma.

In Sanatana Dharma, the first line of the phrase is only applicable to the renunciates and the ascetics.  Even if provoked, a Sannyansin should not defend himself even when his life is in danger because he identifies himself with the Atman rather than associating with his body.

However it is the second line that is purposefully dropped by the preachers of Dharma and Ahimsa.

The word, non-violence in English is absolute in its meaning but ahimsa means non-violence in a relative sense.  In Sanatana Dharma, it is the moral duty of a person to practice violence if it is used to stop a greater violence or evil.  For example, in order to keep peace and order in his country, a king has to be strict in his punishment.  To practice ahimsa, he may even have to kill a man who is, for example, taking away the lives of others.

So, the statement, when taken in full context and meaning within Sanatana Dharma, is applicable to most people.

In ancient times, it was the duty of a Brahmin to be well versed in matters of spirituality and be benevolent and kind to all creatures, while a Kshatriya was the protector of everything including Dharma.

In Adi Parva, it is stated:

Verily the highest virtue of man is sparing the life of others. Therefore a Brahmana should never take the life of any creature.

A Brahmana should be versed in the Vedas and Vedangas, and should inspire all creatures with belief in God.

He should be benevolent to all creatures, truthful, and forgiving, even as it is his paramount duty to retain the Vedas in his memory.

In short, he states that a Brahmin should never take the life of any creature, however a Kshatriya may do so as it may be required to ensure proper rule of law and order.

Virtuous men are always kind to all creatures, and well-disposed towards regenerate men. They abstain from doing injury to any creature, and are never rude in speech. Those good men, who know well the consequences of the fruition of their good and evil deeds, are commended by virtuous men.

The above statement uses “ahimsa” to emphasize on non-injury to any creature by spiritual or holy men.

This phrase is not found in Bhagavad Gita as it is often depicted.  On the other hand, Lord Krishna tells Arjuna to get up and fight:

If, however, you do not fight this religious war, then you will certainly incur sins for neglecting your duties and thus lose your reputation as a fighter.

In this instance, it is the duty of a man to fight against injustice and evil rather than practice the greater dharma of non-violence.  Lord Krishna clearly states that ahimsa, while highly regarded, is not the highest dharma for everyone and certainly not for Arjuna on the battlefield of Kurukshetra.

When a person turns away from sensory objects by giving up the doership of action and embraces the Inner Self (the Atman) in pursuit of Jnana and Moksha, then they rightfully follow the path of Ahimsa.

But for a householder still involved in worldly pursuits, the path of ahimsa is impractical.  For example, practicing ahimsa when someone enters a house and molests a householder’s wife or child would be an act of cowardice.  In the same manner, a soldier cannot put down his weapons in a war; nor can a king let criminals and neighbouring kingdoms continue oppressing and attacking his subjects and pretend to be a follower of non-violence.

In either of the cases above, practicing of ahimsa would be adharma, not Dharma!

To deliver the pious and to annihilate the miscreants, as well as to reestablish the principles of religion,
I Myself appear, millennium after millennium.

Who is Lord Brahma: The God of Creation
The Secrets of the Vedas
Comment