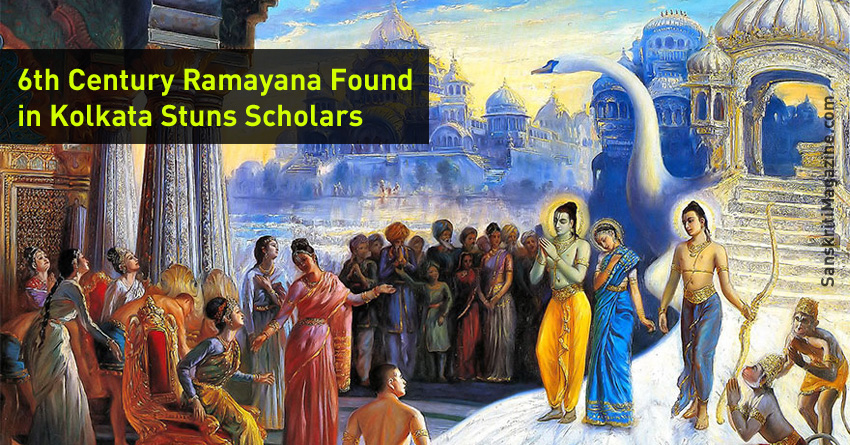 A 6th-century manuscript of Ramayana, which focuses on the separation of Rama and Sita and portrays them more as humans, has been found tucked inside a Purana at a Sanskrit library here. It is markedly different from the more accepted 4 BC Valmiki Ramayana. The 12th-century rendition by Tamil poet Kamba is generally considered the second oldest among the more popular versions. However, now that may change.

The 6th-century manuscript was discovered purely by chance. Scholars working on the 6th-century Vanhi (fire) Purana at the Asiatic Society library were puzzled to find that the manuscript seemed incomplete. They began looking through the Catalogus Catalogorum – a global repository of Sanskrit manuscripts compiled by German scholar Aufrecht – and realized two more identical manuscripts existed.One was preserved at the India Office Library, London; the second at the Kolkata-based Samskrita Sahitya Parishad, a 100-year-old research institution.

The scholars scoured the archives and found the complete version of the Vanhi Purana manuscript. When they were analyzing it, they stumbled upon the Dasa Griba Rakshash Charitram Vadha, which did not have any bearing with the Vanhi Purana. For some time they could not understand why the slokas of the Purana suddenly started telling another story – albeit a familiar one, as the main characters were Rama, Sita and Ravana. Before long, they realized it was a 6th-century version with many interpolations.

“Interestingly in this version, there are just five kandas (sections) instead of the accepted seven. There is no Balakanda – the part that deals with Rama’s childhood – or Uttarkanda. This Ramayana ends with the return of Rama and Sita from exile and his ascension to the Ayodhya throne,” said Anasuya Bhowmick, lead scholar of the Asiatic Society, who is working with the manuscript. This Ramayana does not begin with the curse that drove Dasarath to send his son to exile.

Instead, it begins with a curse that befell goddess Lakshmi when Shukracharya got angry with Narayan for killing Shukracharya’s wife.

“Ram here is more human than God, with follies like anger and failure. Some interesting details – like the ages of Sita and Rama at the time of marriage and the date when Sita was abducted by Ravana -are in this version,” said scholar Manabendu Bandyopadhyay.

Krishna Ashtottaram: The 108 Names of Lord Shri Krishna and their meaning
Angkor Wat Temple is Larger and More Complex Than Thought Earlier
Comment