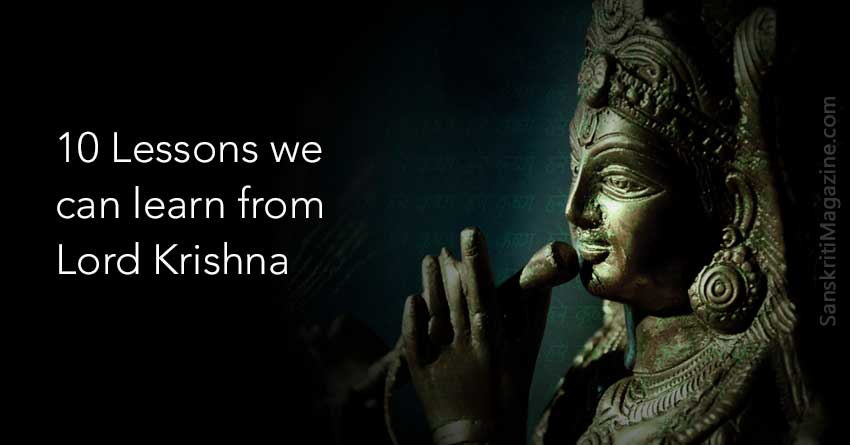 Lord Krishna is the eighth incarnation of Lord Vishnu and considered as the supreme deity by many Hindu communities. He was often portrayed as a God-child, prankster, an ideal lover and divine hero who flaunted a mesmerizing persona. People who are struggling with their life can learn many things from his teachings and live a peaceful life.

Here are some noteworthy lessons we gathered from the illustrious life of Lord Krishna. 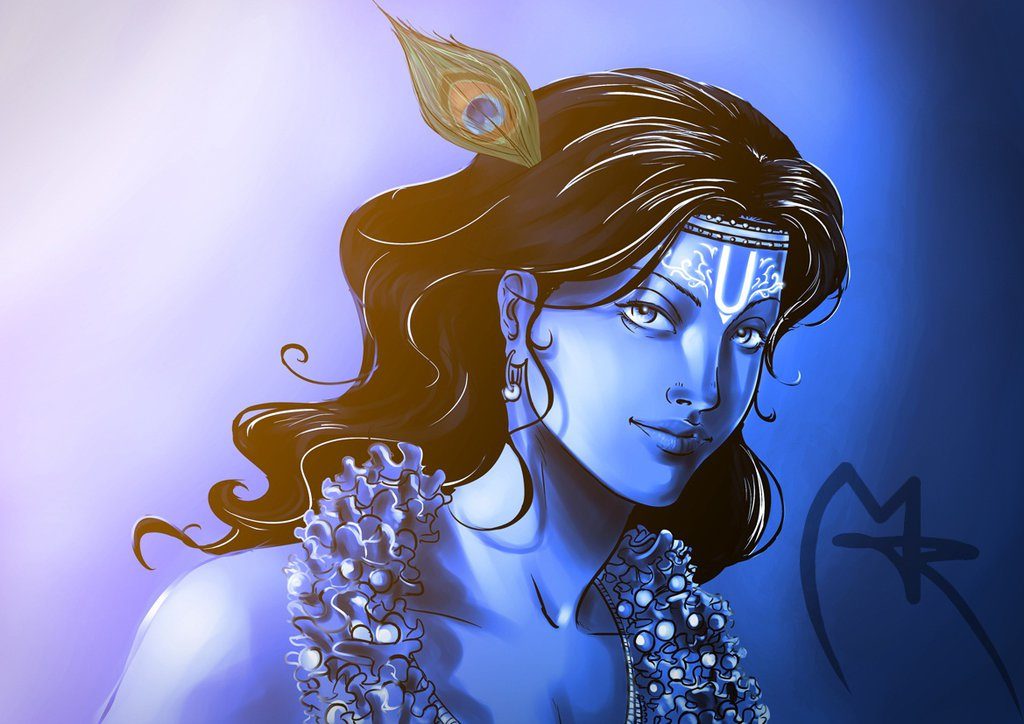 After Lord Krishna’s birth, to secure his safety from the evil king Kamsa, he was carted off from his birth parents to a safer place in a small village, Gokula. There, Krishna lived a simple life with no luxuries as his foster mother Yashoda took care of him. Later in his childhood, he went to Mathura and was offered highly luxurious life. But he never took those materialistic things seriously. Whether he lived a simple or princely life, he was always neutral.

From this, we too must learn to live neutral. Nothing is permanent in life. If you are enjoying many riches presently, that doesn’t mean your future will reciprocate the same. Rather learn to be contented with whatever you have and accept everything as God’s blessings.

2. Never give up what you love 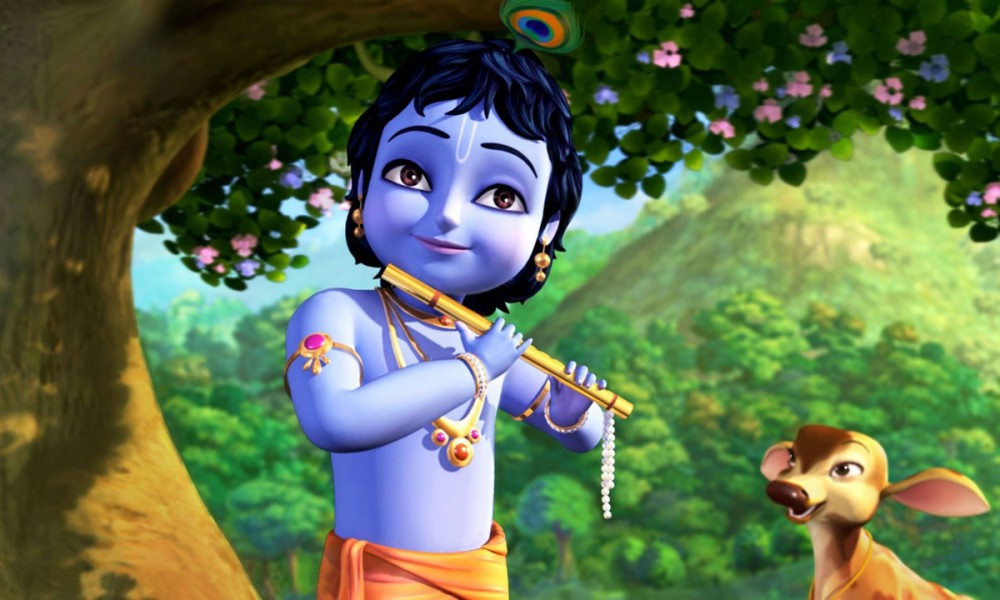 Lord Krishna, with a country to rule, a war to fight, demons to conquer and through various other commitments, still managed to inculcate the music he loved into his life. He never let his passion for music take a back seat on account of his commitments. He enjoyed playing his flute, mesmerizing those around him with lively tunes.

But, unfortunately in the modern era, with our many commitments, we tend to lose sight of our hobbies. The lesson is, no matter how much busy you are with your commitments, don’t ever give up on your hobbies. 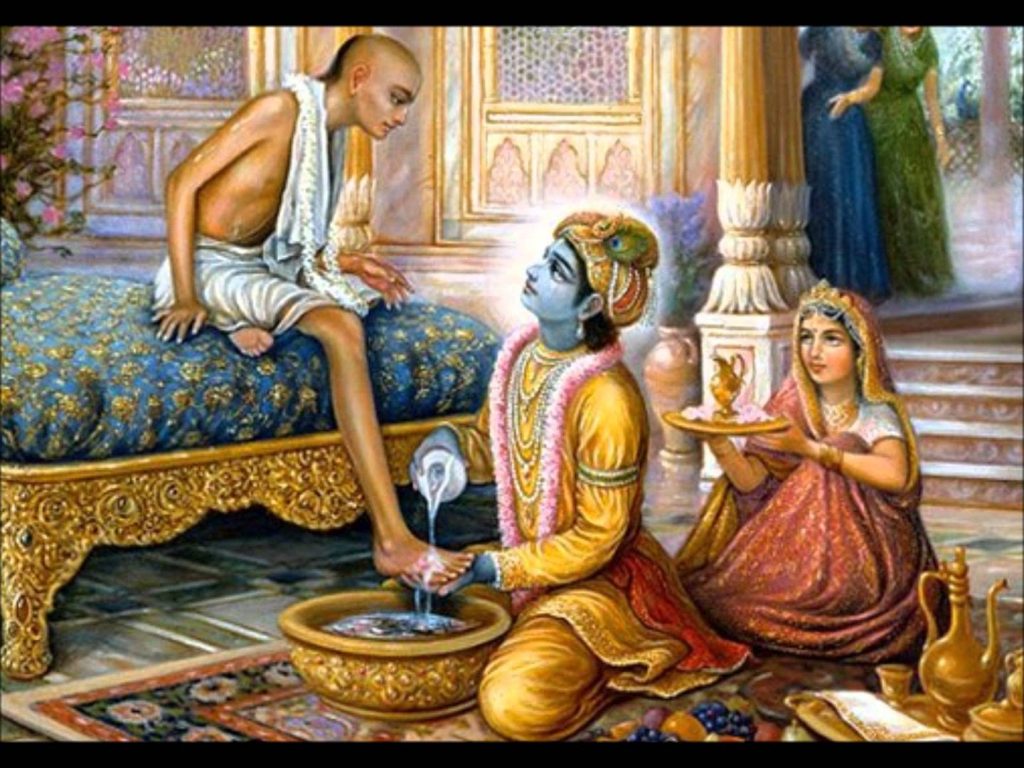 In this contemporary world of competition, relationships tend to take a backseat. Friendships began to fade into oblivion. This story of Lord Krishna on how he valued his friendships and treated his friends, rich and poor, with a lot of love and genuine affection gives you some friendship goals.

Once Lord Krishna’s childhood friend, Sudama visited him hoping to ask for some assistance. Sudhama, unlike Krishna, was a poor man, whose family could hardly make ends meet. While visiting his friend, Sudama wished to give a beautiful present to Krishna but he did not have money to buy. Hence, he gifted him a handful of rice, he had at that time. Despite being opulent, Lord Krishna happily accepted the handful of rice with so much joy as it was a gift from his childhood friend. But once after being there, Sudama couldn’t impose his problems on his friend Krishna. On returning home Sudhama was astonished to see his home as it was transformed into gold and there were all kinds of precious stones and wealth. Lord Krishna being the genuine friend, he understood Sudhama’s plight even without Sudhama uttering a word. That is the true meaning of friendship. 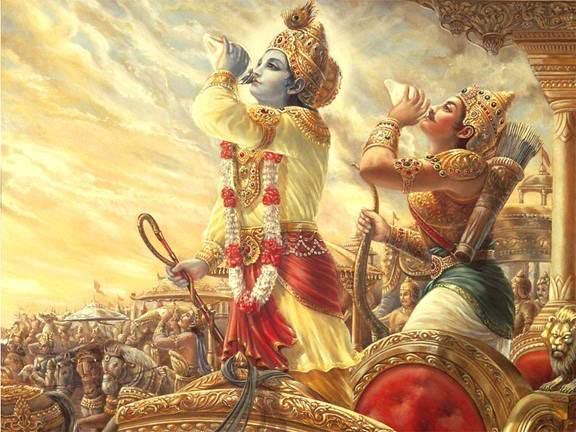 Lord Krishna ruled over the splendid Dwarka, a king no less. This Supreme being during the Kurukshetra war, donned the role of a humble charioteer. Lord Krishna was the embodiment of simplicity and his role as a charioteer is a testament to that. Similarly, you too must be humble in your life. It helps you cultivate genuine relationships with genuine people.

Remember that when a person does something good to you, try to do as much as you can to return the favor. Be generous enough to give people more reasons to be happy in their lives.

5. Play cute when you make mistake 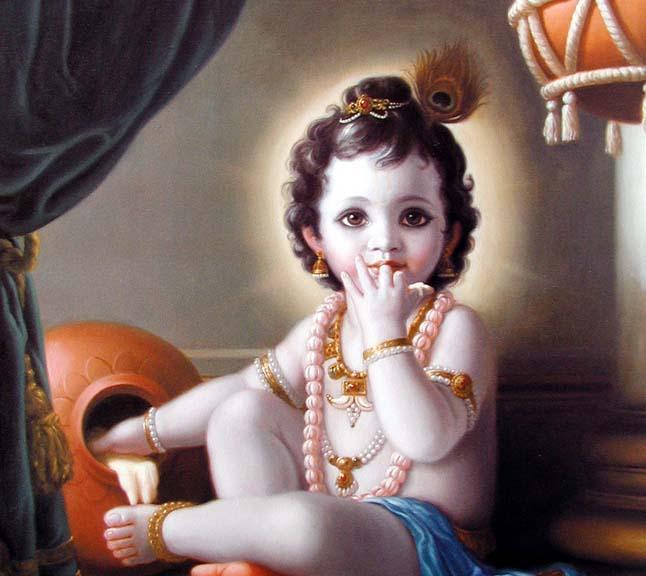 Everyone does things they aren’t supposed to and get busted, even Krishna. Krishna couldn’t resist the taste of freshly made butter and would steal them in innovative ways only to get complained about to his mother by the villagers. However, Krishna knew how to look cute and dilute the situation. It was his pleasant demeanor that made people end up loving him even when angry at him.

We all make mistakes in life and most of the times the fault is entirely ours. There’s no point talking back to those we have hurt or denying responsibility. However, playing cute does help to evaporate the anger fast.

6. Don’t look down on yourself 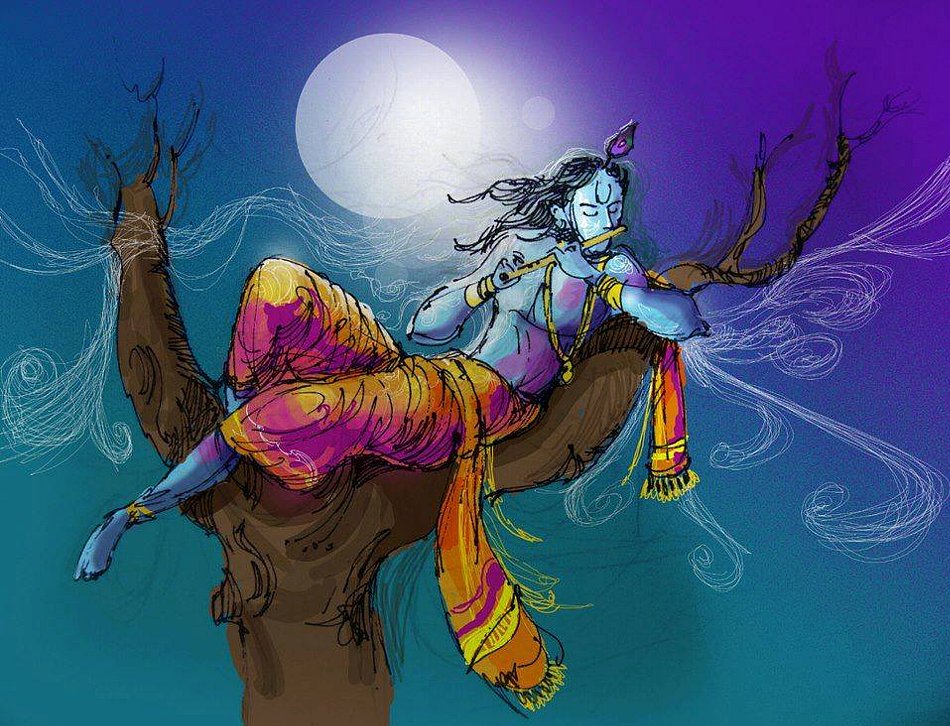 Don’t ever look down on yourself. Don’t allow what people say about you make you feel inferior. You are unique in your own way. Whenever you unconsciously judge yourself every single time, you are actually causing a fatal effect to your self-esteem.

For example, many people, especially Indians are known for their fair skin fantasy. You can find this obsession everywhere – From the matrimonial ads to the TV Commercials and even in your everyday life! Lord Krishna, the epitome of male beauty is clearly dark-skinned. His name means “The Dark One”

7. Create your demand by limiting your availability 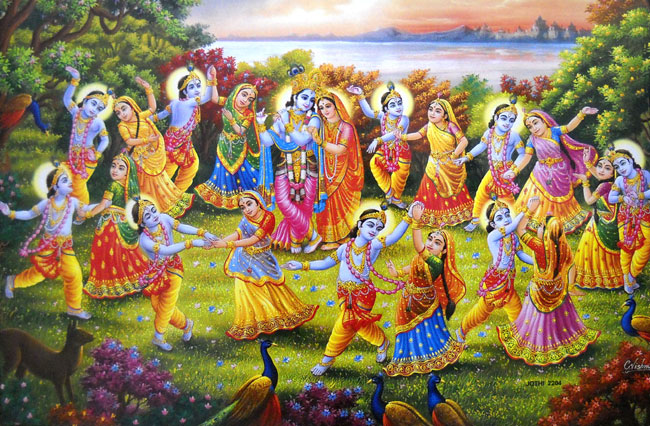 Krishna would play flute with several Gopikas around him at their own free will in Vrindavan. Sometimes, he would get a little too close with one of them and just when that Gopi would try to gather more part of his attention or feel special of herself that Krishna loves her more since Krishna would be particularly attentive to her, would vanish suddenly for her.

This is exactly how you must create your demand by limiting your availability at places like an organizational setup. Be Secure, with the manager/leader having the skill to impart a sense of belonging to his employees.

8. Guys, be a feminist when you need to be 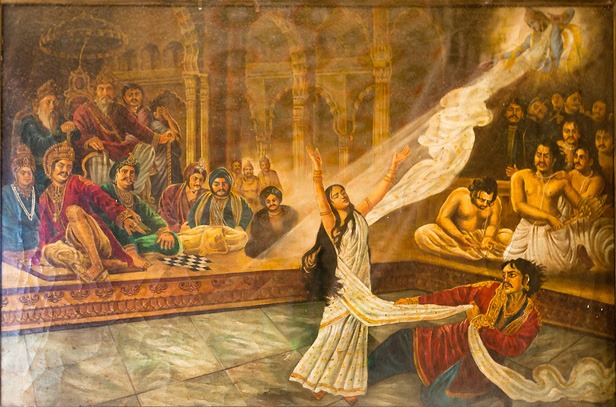 You must stand up and revolt whenever you see women being objectified, used as commodities or being violated. Remember how Krishna stood for Draupadi when the Kauravas tried to violate her?

Draupadi was stripped off her clothes and humiliated in front of the entire court. Her own husbands thought of her as a property they have lost in a game and didn’t move a muscle to protest. It was Krishna who stepped into the scene and presented her with a saree.

The lesson is, it was not because he wanted to impress Draupadi. He acted so as to defend a woman’s dignity. He was acknowledged for his active involvement in defending women’s rights and that’s probably why he continues to reside in the hearts of women till date. 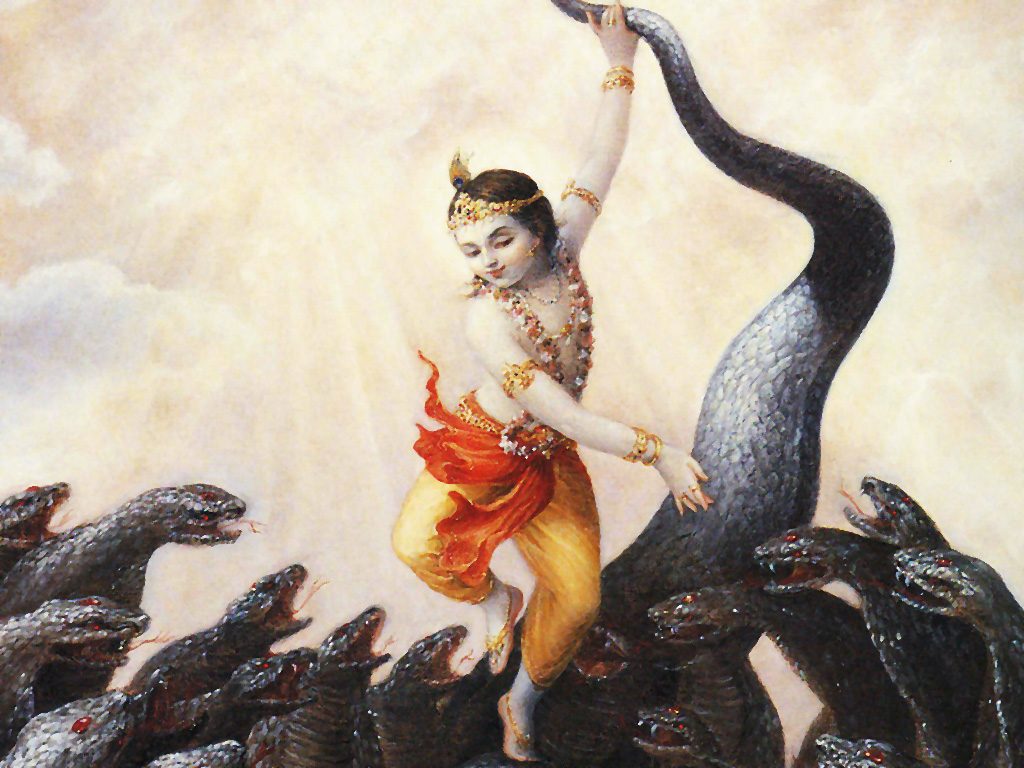 This one is especially for the guys who involve themselves in a fight at the slightest provocation because it apparently challenges their male ego directly. Women like a brave man but they like a sensible man even better.

During one of the incidents in Krishna’s life, when Yadavas were to be attacked by the huge army of Jarasandha, all Yadavas wanted to fight them despite knowing they could never defeat them. It was Krishna who kept his head cool and planned to evacuate Mathura to Dwaraka in order to avoid the battle. This act of fleeing the battlefield earned him the name of “Ranchod” but that never bothered him. He could not let his ego cause the death of innocent lives, especially his family. 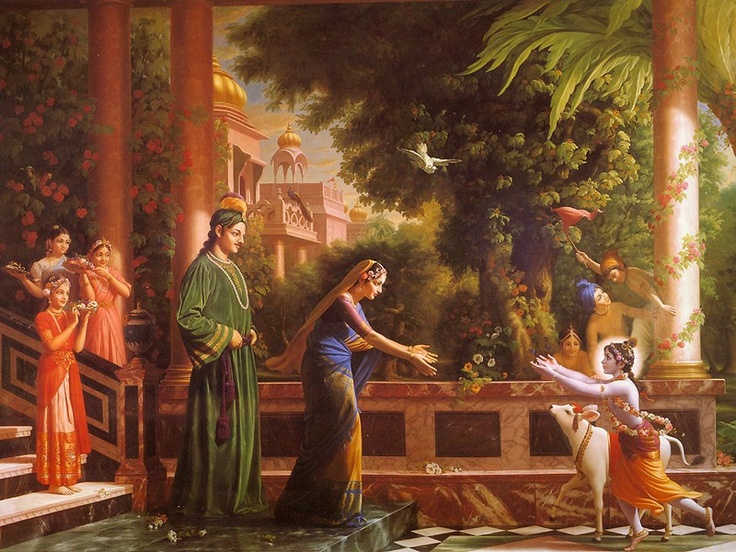 Krishna, as a baby was carted off from his birth parents to a safer place in a small village, Gokula, to secure his safety from the evil king Kamsa. His parents underwent torture under the hands of Kamsa; their lives were steeped in misery. Once Krishna reached manhood and came to know about his parents, he gave up his carefree life as a cowherd; risking his own life, he defeated Kamsa and liberated his parents from his clutches. Lord Krishna did his duty by his parents.

Unfortunately, times have changed. Children digress from their duties towards their aged parents. Many fail to realize the love that parents have towards their children and only acknowledge them as a source of burden. Maybe society needs to take a cue from Lord Krishna’s life.

Myth Buster: Was Vanavas a punishment and was Sita deserted by Lord Ram?
Women Are Born Managers And Leaders
Comment