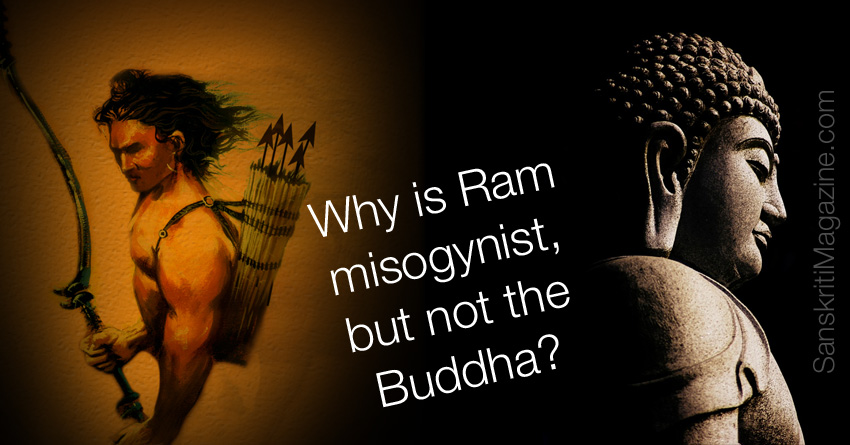 Hinduism is patriarchal. No doubt about it. So are Christianity and Islam, Sikhism and Shinto, Jainism and Judaism. But Buddhism? It is not the first religion that comes to mind when we talk about misogyny.

The assumption is that Buddhism is rational, modern, agnostic and liberal in matters of gender and sexuality. Book after book has conditioned us to see the celibate and chaste Buddha as a kind of androgynous, asexual, gentle sage with a beatific smile. Yet, some of the earliest and most systematic documentation of rejection of female sexuality in Indian literature is from Buddhist scriptures, especially the rules of monastic discipline (Vinaya pitaka), traditionally attributed to the Buddha himself.

Buddhist monks, unlike other monks of that period, are not allowed to wander naked for fear they would attract women with their charms, believed to be enhanced because of their chastity and celibacy.

Monks are advised to walk straight, without moving their arms and bodies too much, looking at the ground and not above, lest they get enchanted by “the glance of a woman”. Monks are also advised not to walk with single women, or even sit in the company of men, for it might lead to gossip.

In a conversation with Kassappa, Bakulla says that in 80 years he has not only not had sex, he has not even entertained thoughts of women, or seen them, or spoken to them.

Once a woman laughed and showed her charms to Mahatissa, but he remained unmoved. When asked by her husband if he found his wife unattractive, Mahatissa said he saw no woman, only a heap of bones.

Initially, none of these strictures were codified. There was no Vinaya Pitaka. But as many people joined the monastery (vihara), they started behaving in certain ways that were deemed unworthy of monks and seekers of Buddha-hood. People also started making fun of the Buddhist way. So to protect the reputation of the dhamma and the sangha, Buddha began putting down these rules.

These codes were compiled orally and narrated by Upali (a barber before he became one of Buddha’s 10 chief disciples) in the first Buddhist council, a year after Buddha’s death. This happened 2600 years ago. A thousand years later, these rules were systemised and codified by one Buddhaghosha who lived in the monastery at Anuradhapura in Sri Lanka.

By the time Islam arrived, Buddhism had already waned in most of India. But the Buddhist idea equating women’s sexuality with entrapment and pollution informed Hindu monastic orders (mathas), especially those instituted by Adi Shankara. Shankara was often called a Buddhist with Hindu packaging, by his critics. In his monastic order, he went a step further: there were no nuns.

If we believe the theory that “Jesus lived in India”, this code of monks could even be said to have influenced the anti-women stance outside India too – in Christianity as well, for while the Buddha abandoned his wife, Yashodhara, Jesus never married at all. Significantly Buddhaghosa lived around the same time as St Augustine of Hippo came forth with his anti-sex and anti-women trope in the Catholic Church.

It is interesting that in all writings of patriarchy and misogyny related to India, scholars quote the Ramayana and the Manu Smriti, yet historically these were composed after the Vinaya Pitaka. Buddha lived in pre-Mauryan times while the Ramayana, with its concern for kingship, was written in post-Mauryan times. Arguments of oral traditions and astrology-based dating that place Ram to pre-Buddhist times appeal only to nationalists, not historians. Manu Smriti and other dharmashastras were written in the Gupta era when Brahmins played a key role in legitimising kingship in much of peninsular India. The pre-Buddhist Vedic rituals speak of female sexuality in positive terms as they are concerned primarily with fertility and wealth-generation. The pre-Buddhist Upanishads do not bother much with gender relations and are more interested in metaphysics. Much of Buddhist literature was put down in writing long before Sanskrit texts (Ashokan edicts in Prakrit date back to 2300 years; the earliest Sanskrit royal inscriptions have been dated to only 1900 years ago). This makes Buddhist writings the watershed of Indian literature, after which womanhood came to be seen as polluting, obstacles to the path of wisdom.

We could, of course, argue that that most educated Buddhists were originally Brahmins and so transplanted Hindu patriarchy into Buddhism, that the Buddha had no such intention. We can insist that Vedas and only the Vedas, are the source of misogyny. This follows the pattern of “good” Buddhism and “bad” Hinduism structure we find in most colonial and post-colonial academic papers.

The complete silence on the subject of misogyny so firmly entrenched in the Buddhist scriptures, and traced to the Buddha, is quite remarkable. Research on this topic is well known but restricted to academic circles. There is ‘Buddhism after Patriarchy’ by Rita Gross and ‘Bull of a Man’ by John Powers, for example. But there is a strong desire in these books to explain away the patriarchy, rather than put the spotlight on them. It is almost as if the scholars are irritated, even embarrassed, that the facts interfere with contemporary perceptions of the Buddha.

Abandoning sex, which effectively means abandoning women, for a “higher” purpose – be it enlightenment or spirituality or service to the nation – has since become a popular model, embraced by religious sects, as well political organisations such as the Rashtriya Swayamsevak Sangh. It has been glamourised and valorised as the ultimate indicator of masculinity and purity. We can trace, at least one major tributary of this idea, to the Vinaya Pitaka of the Buddha, who abandoned his wife, without her consent.