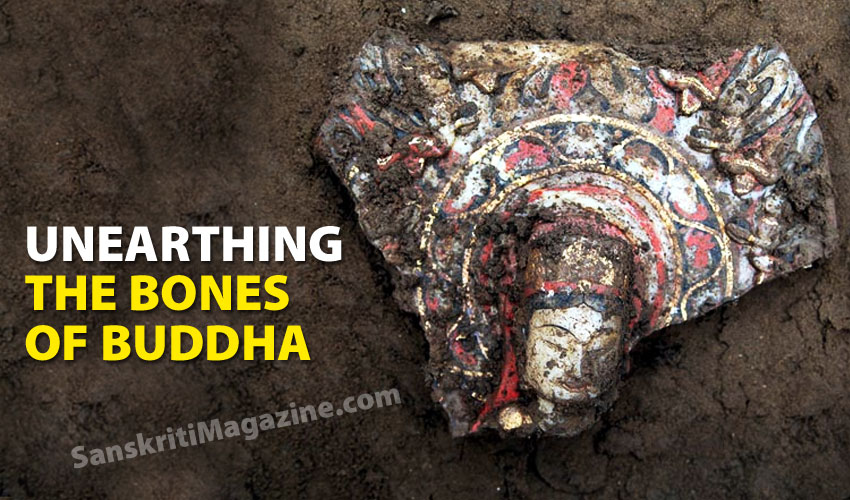 It sounds like the plot of the next Indiana Jones movie – with historian Charles Allen dashing about India in search of the physical relics of the Buddha. But according to the expert on Indian history, the Bristol-made film could rewrite the story of what happened to the Buddha’s remains after his death, and make a small village near the Nepalese border a shrine for the world’s Buddhists.

Charles, cousin and godfather of TV adventurer Benedict Allen, has been keen to look more closely into the story of the Buddha’s bones for more than a decade – and having penned 23 well-respected books about the history of the sub-continent, the 73-year-old Somerset-based historian is regarded as one of the world’s experts on Indian history.

The documentary, which has been produced by College Green-based Icon Films, follows Charles as he sets out to solve the mystery of whether the jewels, bones and ashes found in an Indian tomb in 1898 mark the final resting place of the Buddha himself or whether they are an elaborate hoax.

In 1898 colonial estate manager Willie Peppe’s workers, digging at a mysterious hill in Northern India, found what seemed to be the most extraordinary discovery in Indian archaeology – 20ft down they unearthed a huge stone coffer containing five ancient soapstone jars, more than 1,400 separate jewels and some bone.

One jar had an inscription that appeared to say they were the remains of the Buddha himself, buried by his own “clan”, the Sakyas. Or were they?

Doubt and scandal have hung over the amazing find for more than 100 years.

One of those involved in the dig, German archaeologist Dr Anton Fuhrer, was revealed to be the greatest archaeological hoaxer of the age.

He had sold bogus Buddha relics to a Burmese monk; he had falsified reports; worst of all, he had faked ancient Indian inscriptions.

Anxious to quash the scandal, India’s British Government brushed the whole remarkable find under the carpet, giving the ashes and bones away to the King of Siam, thus currying favour with a strategic ally in the region.

But rumours of Fuhrer’s involvement have dogged the find ever since. Had he added objects to the coffer? Had he colluded with Mr Peppe, even with other officials too? Most serious of all, had he faked the all-important inscription?

Charles was determined to solve the mystery once and for all. He visited the site of the epic discovery in northern India, and the crumbling ruins of Birdpore House, where the Peppes once lived.

“I started off by visiting Willie Peppe’s grandson, Neil, who lives in an unremarkable suburban bungalow, but who still has some of the jewels found by his grandfather,” Charles says. “He was very keen that we might be able to solve the mystery over his grandfather’s find once and for all.”

At Calcutta’s Indian Museum, Charles met up with the world’s foremost expert on ancient Indian inscriptions, Professor Harry Falk, of Berlin, to examine the vital inscription on the stone coffin found in the tomb. Falk’s verdict? It is genuine.

“He looked at me and smiled,” Charles recalls. “Almost immediately he could see that the language used on the inscription would not have been something that Fuhrer would have known to write, if he had faked it.”

There were nuances to the early form of the language, that have only recently been appreciated by experts in the field.

“It was clear that the stone coffin didn’t date from the time of the Buddha’s actual death, 410BC, because there wasn’t a written form of the language that early.

“But we believe it dates back to the time of Emperor Ashoka, who unified India through war, and later converted to Buddhism.

“There are accounts that he visited the region around 260BC, and we believe he had this part of the Buddha’s remains in a grander tomb, and had the stash of jewels placed around the coffin.”

Charles visited Bodghaya, the “navel of the world” for 600 million Buddhists worldwide; and Kushinagar, where the Buddha was cremated, and his remains split into eight portions – because different sects of his followers could not agree on a single final resting place for his ashes and bone fragments.

Could the most precious portion of all, that buried by his own “clan”, the Sakyas, be buried at Piprawa?

If so, who buried it there, when and why? In search of answers, Charles headed to the heart of India, and one of the country’s most remarkable architectural sites, Sanchi.

With its four 25ft-high carved gateways and massive stupa – or shrine, it is one of the wonders of the world according to Charles.

The man who built it, Emperor Ashoka, converted India to Buddhism, and transformed the nation with a huge stupa building programme. He used India’s first ever script, Brahmi – the same script as is used for the vital inscription – to disseminate his new message on extraordinary rock and pillar edicts that have survived more than 2,000 years.

But was Ashoka responsible for the extraordinary tomb at Piprahwa?

Evidence from a later dig at the site in the 1970s provides vital clues, and leads to an extraordinary conclusion. In all likelihood, this amazing find does mark the final resting of the Buddha – a discovery of huge importance for the world’s 600 million Buddhists.

“It was a fantastic conclusion for the documentary,” says Charles. “Not one of those feigned conclusions you sometimes get at the end of documentaries – but a real, important discovery, which I believe could make this unassuming site a shrine for millions of Buddhists.

“This, after all, is the only known final resting place, were the Buddha’s remains were once lain.”