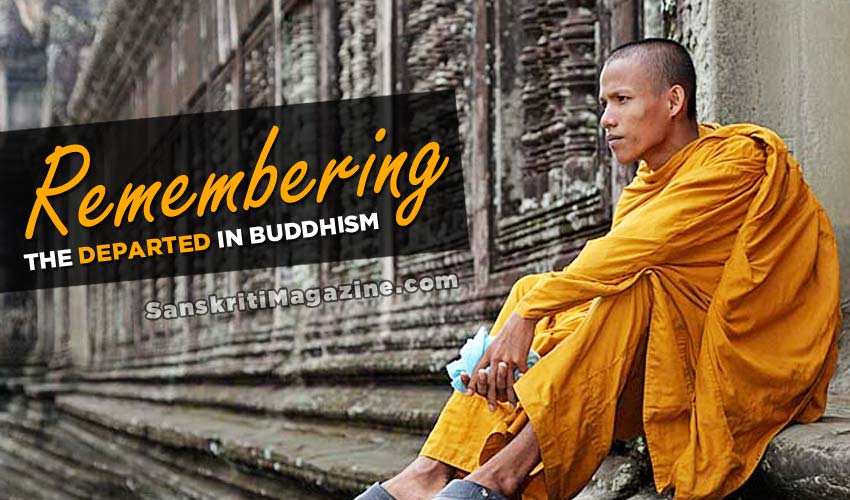 If you really want to honor and help your departed ones, then do some meritorious deeds in their name and transfer the merits to them.

According to Buddhism, good deeds or ‘acts of merit’ bring happiness to the doer both in this world and in the hereafter. Acts of merit are also believed to lead towards the final goal of everlasting happiness. The acts of merit can be performed through body, speech or mind. Every good deed produces ‘merit’ which accumulates to the ‘credit’ of the doer. Buddhism also teaches that the acquired merit can be transferred to others’ it can be shared vicariously with others. In other words, the merit is ‘reversible’ and so can be shared with other persons. The persons who receive the merit can be either living or departed ones.

The method for transferring merits is quite simple. First some good deeds are performed. The doer of the good deeds has merely to wish that the merit he has gained accrues to someone in particular, or to ‘all beings’. This wish can be purely mental or it can accompanied by an expression of words.

The ‘joy of transference of merits’ can also take place with or without the knowledge of the doer of the meritorious act. All that is necessary is for the beneficiary to feel gladness in his heart when he becomes aware of the good deed. If he wishes, he can express his joy by saying ‘sadhu’ which means ‘well done’. What he is doing is creating a kind of mental or verbal applause. In order to share the good deed done by another, what is important is that there must be actual approval of the deed and joy arising in the beneficiary’s heart.

Even if he so desires, the doer of a good deed cannot prevent another’s ‘rejoicing in the merit’ because he has no power over another’s thoughts. According to the Buddha, in all actions, thought is what really matters. Transference is primarily an act of the mind.

To transfer merit does not mean that a person is deprived of the merit had originally acquired by his good deed. On the contrary, the very act of  ‘transference’ is a good deed in itself and hence enhances the merit already earned.

Highest Gift to the Departed

The Buddha says that the greatest gift one can confer on one’s dead ancestors is to perform ‘acts of merit’ and to transfer these merits so acquired. He also says that those who give also receive the fruits of their deeds. The Buddha encouraged those who did good deeds such as offering alms to holy men, to transfer the merits which they received to their departed ones. Alms should be given in the name of the departed by recalling to mind such things as, ‘When he was alive, he gave me this wealth; he did this for me; he was my relative, my companion, etc. (Tirokuddha Sutta —  Khuddakapatha). There is no use weeping, feeling sorry, lamenting and bewailing; such attitudes are of no consequence to the departed ones.

Transferring merits to the departed is based on the popular belief that on a person’s death, his ‘merits’ and ‘demerits’ are weighed against one another and his destiny determined, his actions determined whether he is to be reborn in a sphere of happiness or a realm of woe. The belief is that the departed one might have gone to the world of the departed spirits. The beings in these lower forms of existence cannot generate fresh merits, and have to live on with the merits which are earned from this world.

Those who are reborn in an unfortunate spirit form could be released from their suffering condition through the transferring of merits to them by friends and relatives who do some meritorious deeds.

This injunction of the Buddha to transfer merits to departed ones is the counterpart of the Hindu custom which has come down through the ages. Various ceremonies are performed so that the spirits of dead ancestors might live in peace. This custom has been a tremendous influence on the social life of certain Buddhist countries. The dead are always remembered when any good deed is done, and more on occasions connected with their lives, such as their birth or death anniversaries. On such occasions, there is a ritual which is generally practised. The transferor pours water from a jug or other similar vessel into a receptacle, while repeating a Pali formula which is translated as follows:

The only way to help the departed ones is to do some meritorious deeds in a religious way in memory of them. The meritorious deeds include such acts as giving alms to others, building schools, temples, orphanages, libraries, hospitals, printing religious books for free distribution and similar charitable deeds.

The followers of the Buddha should act wisely and should not follow anything blindly. While others pray to god for the departed ones, Buddhists radiate their loving-kindness directly to them. By doing meritorious deeds, they can transfer the merits to their beloved ones for their well-being. This is the best way of remembering and giving real honor to and perpetuating the names of the departed ones. In their state of happiness, the departed ones will reciprocate their blessings on their living relatives. It is, therefore, the duty of relatives to remember their departed ones by transferring merits and by radiating loving-kindness directly to them.