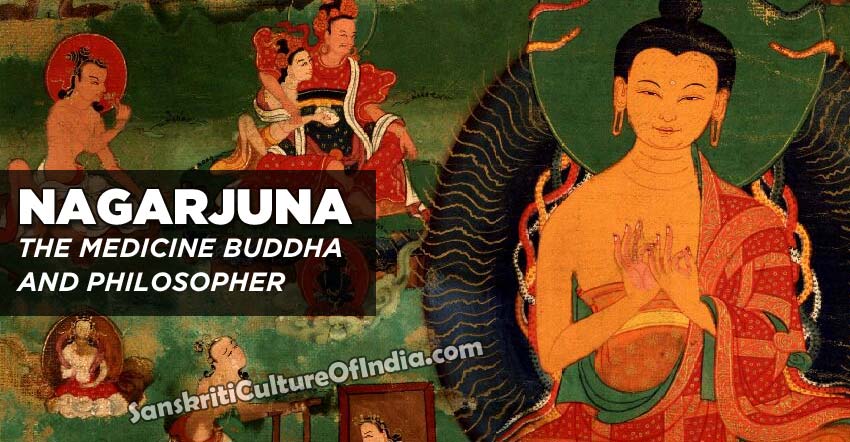 Acharya Nagarjuna (c. 150 – 250 CE) known as ‘the Medicine Buddha’, was a great ancient philosopher, who is considered to be the founder of the Madhyamaka (Middle Path) school of Mahayana Buddhism, and was the most influential Buddhist thinker after Gautama Buddha himself. In several Buddhist monasteries, the medicine Buddha’s idol can be seen on the right side of the Buddha idol as well. Hence he is often referred to as ‘the Second Buddha’ also. Historians say that he was a contemporary of the historical king, of the northern Indian Satvahana dynasty, known as Gautamiputra Satakarni.

He was born into a Brahmin family in the Andhra area of South India, and was later converted to Buddhism (hence he could write in classical Sanskrit rather than Pali which was the Buddhist language). Before the age of eight he was brought to the great teacher Saraha at the renowned Nalanda monastery, which was one of the first among the very few known University-modelled education centres in the world history. He was ordained as a monk in the name Shrimantha. Later in his life he became a fully-accomplished scholar and teacher, and also the Abbot of Nalanda, which is also considered to be the educational capital of ancient India.

As per the story behind the name ‘Nagarjuna’, not long after Buddha passed away, Prajnaparamitha (Perfection of Wisdom) Suthras, the principle Mahayana teachings, had disappeared from this world. This was because some ‘Nagas’ who had received those teachings from Buddha had taken them to their own oceanic world, for safekeeping. Some time later the ‘Nagas’ invited the monk Shrimantha to visit them, and returned those valuable scriptures to him. He brought the scriptures to the human world and propagated them widely. Because of his special relationship with the ‘Nagas’, and because he cured many ‘Nagas’ of sickness, he was given the name ‘Protector of the Nagas’ or the ‘Protector Nagarjuna’ and hence the ‘Naga’ (Snake) aspect is said to have formed a canopy crowning and shielding his human head. The word ‘Nagarjuna’ means the ‘noble serpent’.

Nagarjuna was considered to be a fairly active author, addressing the most pressing philosophical issues in the Buddhism and Brahmanism of his time, and more than that, carrying his Buddhist ideas into the fields of social, ethical and political philosophy as well as medicine. Kumarajeevan, who was the teacher of the Chinese traveller Fa Hien, translated 47 books into Chinese and wrote Nagarjuna’s biography.

Nagarjuna is considered to be one of the ancient scholars and teachers of Ayurveda and was believed to have travelled and visited Thiruvizha Viharam temple near Cherthala in the Alappuzha district of the South Indian State of Kerala – the home State of Nagarjuna Ayurvedic Group.

According to the renowned historian Mr. Christian Lindtner, the literary works of Nagarjuna were:

The literary works of Nagarjuna also include: