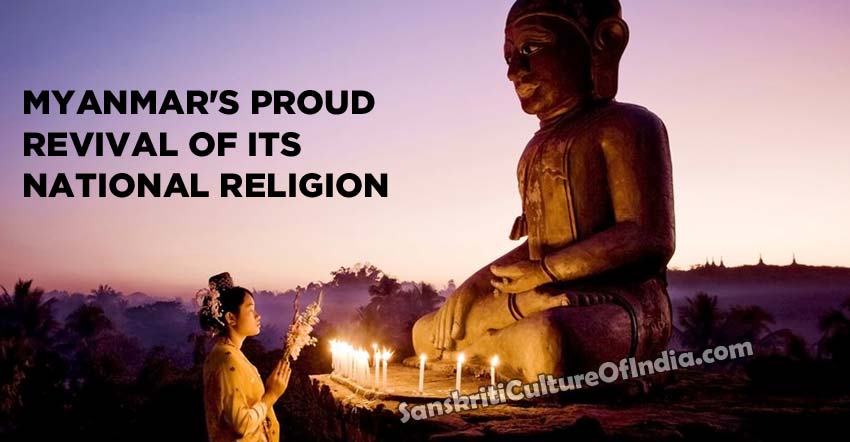 In the hot month of April, around the time of Thingyan, when the water festival is celebrated in Myanmar, the streets of Yangon come alive with cavalcades of cars carrying golden umbrellas. Inside the cars, resplendent in dazzling traditional court costumes of Myanmar princes, complete with sequinned winged helmets and shoes, sit young nervous boys with anxious parents and relatives. And the local band follows them, playing joyful tunes while they make their way to a monastery.

This is not only in the country’s capital city. Elsewhere in the rural countryside, similar processions are undertaken – young ‘princes’ are heralded on the shoulders of their proud fathers or on horseback and elephants. The destination for all these young people is the same ‘ the pongyi chaung or monastery. There, under pagodas and majestic figures of the Buddha, young boys have their hair shaved, clutch their black lacquer begging bowls for the first time, take the 75 Buddhist precepts of a novice and don saffron robes to become the sons of Buddha. 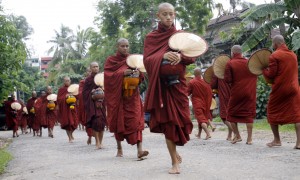 Theravada Buddhism, the oldest and the most traditional Buddhist sect, came to Myanmar from Sri Lanka nearly 3,000 years ago after Emperor Ashoka sent his children to Sri Lanka as Buddhist missionaries. Today, nearly 90 per cent of the Myanmarese are Buddhists. Every year at Thingyan, which also marks the New Year for Theravada Buddhists, thousands of young boys are initiated as novices in a ceremony called Shin-pyu. What makes this practice of Buddhism in Myanmar striking, centuries after it came to its shores, is that it is still practiced with the same awe and fervor. What is equally significant is that it is the cornerstone of Myanmarese life even today.

When the British colonized Burma, Queen Victoria promised religious tolerance to her colonized subjects, but did not extend any patronage to Buddhism. Instead, Christian missionary schools mushroomed and made Bible studies compulsory for all Burmese students. The result of this was that the monastic schools, which were the mainstay of Burmese society, disintegrated. It was only after the country became independent and there was renewed interest in finding roots, that monasteries were revived.

Today, the age-old Buddhist beliefs of the Five Great ‘Beings’ – the Buddha, His Teachings, the Monk, the Teacher and the Parent – are still prevalent in Myanmar. Monks are not priests as Buddhism never considered ritual to be of any importance. Instead, they bear the title of Thagiwin Mintha, or the heir of the prince of Kapilawut (Kapilavastu) and the receiver of his inheritance. Novitiation marks the first social rites of a young Buddhist boy’s passage into puberty while also providing him the basic tenets of Buddhist customs and values. The young boy enters the monastery in princely attire to symbolize the royal life of Prince Siddhartha, and by donning yellow robes of the novice he renounces the world to enter the life of a monk like Buddha.

The novitiation ceremony is solemn as the Abbot asks the son’s mother whether she is willing to renounce her son and it is only after her consent that the ceremony to make him a novice takes place. The novice then takes his precepts and is ordained. He remains in the monastery for a few days or weeks depending on the wishes of his parents or as per the decision taken by the family astrologer. Through their son’s novitiation, parents gain kutho (Buddhist merits) for a better rebirth.

Po Po, Maung Maung, Sein Tun and Maugho Win are four friends who got novitiated together at Dagon Pariyadti Sathintike monastery under their 74-year-old Abbot Ega Mahapandita U Gu Na Nan Da. All four friends, just past their tenth summer, wore brand new robes of monk-hood with pride. They watched their parents walk away with a smile, because for years they had heard how one day they must all become sons of the Buddha. Now they must learn to walk the middle path, to work their way to nibbana (nirvana) through good work, meditation and by studying the dhamma or Buddhist philosophy.

While novitiation is universal for all Buddhist boys, girls too can become temporary nuns and don pink robes in a simple ceremony. They get initiated into nun-hood by piercing their ears and shaving off their long hair, which is a source of pride among young Myanmarese girls. Few families send their daughters to become nuns because unlike monks who receive daily donations of cooked food from the community, nuns have to cook their own food.

Most novitiates from poor families learn basic Buddhist tenets and in addition, also receive basic skills of reading and writing. The literacy rate in Myanmar is 81 per cent and monasteries contribute enormously towards it. Very often what boys from rural areas learn at the monasteries may form the sum total of their formal education. The Buddhist Order has its own curriculum and stages of learning right up to the doctorate level. Interestingly, one subject that monks do not learn is arithmetic as they are not allowed to handle money. 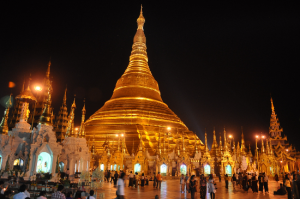 U Gu Na Nan Da, the Abbot of Dagon Pariyadti Sathintike Kaung (Teaching Monastery) was only nine years old when he was novitiated. It was to be a turning point in his life because once novitiated, he refused to leave the monastery. “I just wanted to be a monk. My mother cried for days and would return to ask me to come back home. She thought I was too small to know my mind, but I did – it was the only thing I ever wanted to be in my life,” he says.

Today he heads a monastery that has more than a 100 novices and monks. “It gives me great pleasure to teach children the ways of the Buddha,” he says, exuding quiet peace, dignity and energy. The Abbot agrees that young boys joining monasteries nowadays have different ideas and attitudes which can be expected as the world is changing, but once they don the robes they “become like water – everyone becomes one.”

For instance, 13-year-old novice Wai Tun, came from a small village in Muse (close to the Chinese border) three years ago. He came to Yangon with his elder brother, 21-year-old monk Moe Chow. “I miss my mother sometimes,” says Wai Tun, who is the youngest of seven siblings. He is sure that when his time comes to be a full-fledged monk at 19, he will step forward and accept his legacy. But for now he is content to learn and, along with his friends, prepare the early morning breakfast for the monastery’s inmates.

Monks in Myanmar are held in high esteem. People donate generously to pagodas and monasteries and till a few years ago, people did not cross the shadow of a monk. Even today at bus stops and airports, monks are given the best seats and people bow three times in their presence touching their forehead to the ground. What also makes Buddhism popular is that it is less of a religion and more a way of life and the young generation holds it in as much awe as the older one. For instance, 35-year-old Kyaw Maung, who did his entire schooling and university education in America, dons the yellow robes of a monk every Thingyan. “Ever since my novitiation, I have gone back to become a monk every year for 10 days or for a month. It’s Buddhism that keeps me sane,” he says.