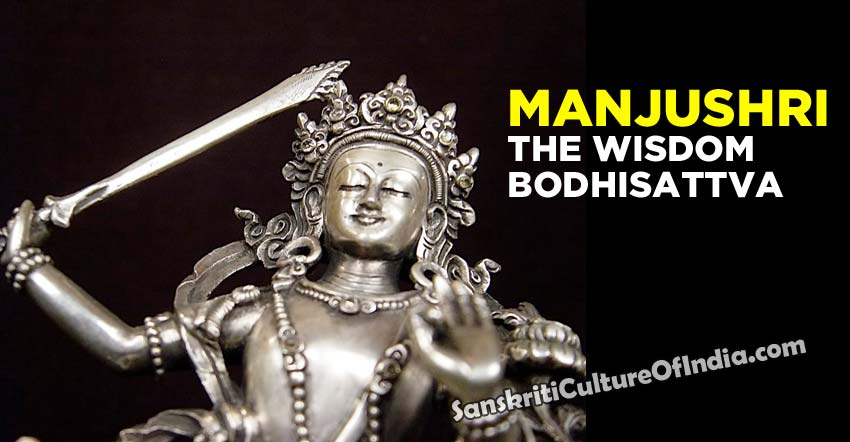 There are eight great Boddhisattvas who have attained salvation ages ago hence nothing is known about their earthly lives, only that they are the eternal saviours of mankind who have become objects of intense worship and devotion by monks and laymen throughout the world.

Manjushri is the embodiement of all the Buddha’ wisdom. The word manju means “charming, beautiful, pleasing” and Shri means “glory, brilliance”. The Bodhisattva is regarded as the crown prince of Buddhist teachings, or the one who can best explain the Buddhist wisdom, that is able to extinguish afflictions and bring about enlightenment. Manjushri has this title because eons ago, he was the instructor for seven different buddhas, the last being Sakyamuni Buddha. His name occurs frequently in various Sutras specially in the Lotus Sutra where his training and disciplining of many Boddhisattvas is mentioned.

Manjushri is often depicted with his right hand holding a double-edged flaming sword and his left hand holding a lotus flower on which rests the Prajnaparamita (Great Wisdom) Sutra. He is often seen riding a lion. The Prajnaparamita Sutra on the lotus flower symbolizes wisdom as pure as lotus. The sword represents the sharpness of wisdom that to cut through illusion. The lion is called the king of a hundred animals, and this symbolizes the stern majesty of wisdom.

Manjushri is known as Wen-Shu-Shi-Li in China, in Japan as Monju Bosatsu, in Tibet as Jambeyang. His image is generally seen in libraries, scripture study rooms and meditation halls in monasteries.

It is said that Manjushri came from the land of Ratnaketu Buddha in the east. His strength is on the Buddhist doctrines of non-distinction and non-retraction to attain nirvana. Manjushri was known for his unconventionally straightforward style of teaching. Unlike other Buddha and Bodhisattva’s gradual method progressing from elementary to more complex doctrines, he would jump directly to the top, the meaning of the supreme truth, ultimate nirvana.

According to the Chinese tradition, from the Buddha’s forehead a golden ray emanated which pierced a Jambu tree which grew on the most sacred mountain of China now referred to as Wu Tai Shan. A lotus sprang from this tree and inside the Lotus was manifest Manjushri. As he was born without mother or father, he was free from worldly bondages. In China Manjushri is also represented as a child with five top knots which signify the five divisions of the Buddha’s wisdom, the wisdom to reflect all things, the wisdom of pure consciousness, the wisdom of profound insight, the wisdom to regard all things equally and unequally and the wisdom to seek the greatest good for oneself and others. In Chinese tradition, the first day of the year is dedicated to Manjushri which falls on the fourth day of the fourth moon according to the lunar calendar.

He is also called Manjugosha, the gentle voiced one and monks in Tibet hail him and chant ‘ Namo Guru Manjugoshaya’ or ‘the Lamp of Wisdom and Supernatural power’ who destroys falsehood and ignorance from the minds of all beings. Manjushri is considered to be Tsongkhapa, the founder of the Gelugpa Sect and Padma Sambhava, the eight century founder of Tibetan Buddhism.

The Kathmandu valley was a lake according to Swayambhu Purana and seeing a lotus flower in the centre of the lake Manjushri allowed the lake to drain. The place where the lotus settled came to be known as Swayambhunath Stupa and the valley became habitable for all people.

The Sailendra rulers who were patrons of Mahayana Buddhism revered Manjushri as a prominent Boddhisattva deity. The Manjushrigriha inscriptions mention the construction of the House of Manjushri or Vajrasana Manjushrigriha identified today as Sewu temple which is the second largest Buddhist temple in Central Java, the first being Borobodur. Manjushri was portrayed as a young man with his left hand holding a blue lotus and wearing a necklace made of tiger canine teeth.

Monju as Manjushri is referred to in Japan is the Boddhisattva of wisdom and is prayed to by youth before giving examinations. He is said to be the Giver of understanding, Guardian and Voice of The Law, One who shows the Holy Way, One of Gentle Majesty and Marvellous Virtue, One with a Divine Voice and Father and Mother of Various Boddhisattvas.

The sacred site of Manjushri is Wu-Tai Mountain in the province of Shan-Xhi in eastern China. As described in a sutra, Sakyamuni predicted that after he enter nirvana, Manjushri would reside on a mountain named Wu-Tai in a east country named “Great China,” where he would teach the Buddhist dharma. Chinese, Tibetan, Korean, and Japanese Buddhist people hence regard Wu-Tai Mountain as a sacred place for worshipping Manjushri. Many temples dedicated to this bodhisattva have been built there.

The perception of truth is not for all minds

These are the qualities which force its exclusion:
Desire, greed, ignorance, pride,
Joy in sensation, love of the past, fear for the future,
Anger at the present, the inability to see clearly.

These are the qualities which bring it nearer:
Hope, joy in change, love of the many
Creative action, individual growth, acceptance of new ideas
The ability to understand potential.

These are the qualities when truth is here:
Acceptance of all form as having equal reality
Clear vision over long distances
Love of all things and non-things
Joy in what is.

With my sword I strike down those who presume to travel
to places forbidden to them
I decide the worthiness of an adept, the talent of a master
the distance both may travel
My book records the karma of each whose deeds
determine the world which they shall inhabit.

I guard the door to Truth unending
Neither mercy nor power shall move me from my decisions
I wear the robes of judge and jury
Across the abyss I hold my golden ladder to aid the worthy
While the unworthy who try to cross
Find only shifting sands within their grasp.

I am blue and gold and also white
I bend neither to the right nor the left
If you wish to ascend to truth, then you must do these:
Look deep within your heart
Feel the many chains which bind you, hold you like an anchor
To the planes of illusion
Not one link will I allow to pass the sacred gates.

Impartial understanding, great in the wisdom of many worlds
Only these do I allow to pass
That they may have wisdom to trade for Truth.

No dramas, no mantras, no striving will I let by me
Those who are ready shall pass
The rest shall strive, dissatisfied and fight among themselves
Letting their true natures come to the surface
And wonder
Why was I not chosen?

You who wish to ascend follow the path
To the cave of loneliness, in the mountains of the self
And when you have found the Hidden
Return to me and I shall bless you
And point you on your way.