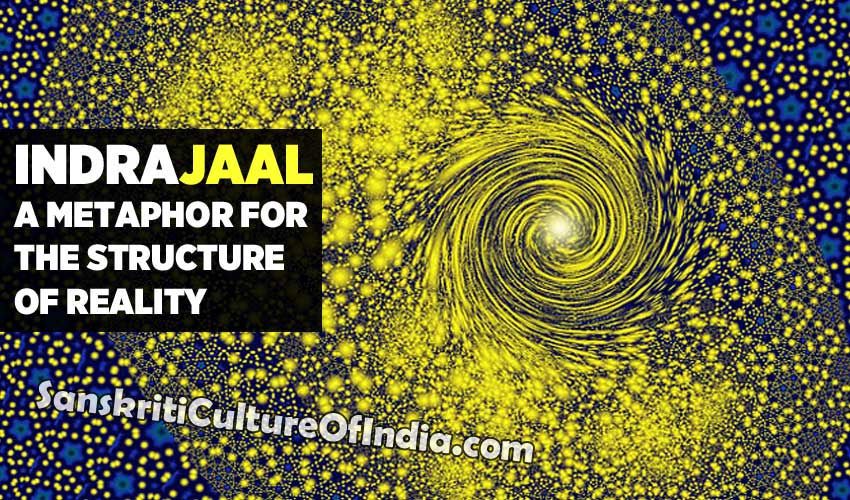 There’s a beautiful Hindu legend about God Indra, who commissions an artisan to craft a vast net across the Universe.

When the net is complete, at each junction Indra places a shining jewel – the facets of which reflect every other jewel in this cosmic network.

Far away in the heavenly abode of the great god indra, there is a wonderful net which has been hung by some cunning artificer in such a manner that it stretches out indefinitely in all directions. In accordance with the extravagant tastes of deities, the artificer has hung a single glittering jewel at the net’s every node, and since the net itself is infinite in dimension, the jewels are infinite in number. There hang the jewels, glittering like stars of the first magnitude, a wonderful sight to behold. If we now arbitrarily select one of these jewels for inspection and look closely at it, we will discover that in its polished surface there are reflected all the other jewels in the net, infinite in number. Not only that, but each of the jewels reflected in this one jewel is also reflecting all the other jewels, so that the process of reflection is infinite.

There are several aspects of Indra’s net, as described in the above quote, that signify it as a crystal clear allegory of reality:

The Holographic Nature of the Universe

Long before the existence of the hologram, the jeweled net is an excellent description of the special characteristic of holograms: that every point of the hologram contains information regarding all other points. This reflective nature of the jewels is an obvious reference to this. This kind of analogy has been suggested by science as a theory for an essential characteristic of the cosmos, as well as as the functioning of the human brain, as beautifully described in The Holograpic Universe by Michael Talbot.

The Interconnectedness of All Things

When any jewel in the net is touched, all other jewels in the node are affected. This speaks to the hidden interconnectedness and interdependency of everything and everyone in the universe, and has an indirect reference to the concept of “Dependent Origination” in Buddhism. Additionally, Indra’s Net is a definitive ancient correlate of Bell’s Theorum, or the theory of non-local causes.

Lack of a Substantive Self

Each node, representing an individual, simply reflects the qualities of all other nodes, inferring the notion of ‘not-self’ or a lack of a solid and real inherent self, as seen in the Advaita Vedanta school of Hinduism and Buddhism in general.

Indra’s Net shoots holes in the assumption or imputation of a solid and fixed universe ‘out there’. The capacity of one jewel to reflect the light of another jewel from the other edge of infinity is something that is difficult for the linear mind, rational mind to comprehend. The fact that all nodes are simply reflections indicates that there is no particular single source point from where it all arises.

The ability to reflect the entirety of all light in the universe attests to the inherent transcendant wisdom that is at the core of all nodes, representing all sentient beings, and to the inherent Buddha Nature.

A familiar concept in various high dharmas is one of an impersonal creative intelligence that springs forth into reality through the instruments of all living beings.

The Mirror-like Nature of Mind

The capacity to reflect all things attests to the mind being a mirror of reality, not its basis. This is a common thesis among various schools and religions.

Stephen Mitchell, in his book The Enlightened Mind, wrote:

“The Net of Indra is a profound and subtle metaphor for the structure of reality. Imagine a vast net; at each crossing point there is a jewel; each jewel is perfectly clear and reflects all the other jewels in the net, the way two mirrors placed opposite each other will reflect an image ad infinitum. The jewel in this metaphor stands for an individual being, or an individual consciousness, or a cell or an atom. Every jewel is intimately connected with all other jewels in the universe, and a change in one jewel means a change, however slight, in every other jewel.”

Practicing peace in every breath
Morning Star Has Risen, Lotus Is In Bloom
Comment