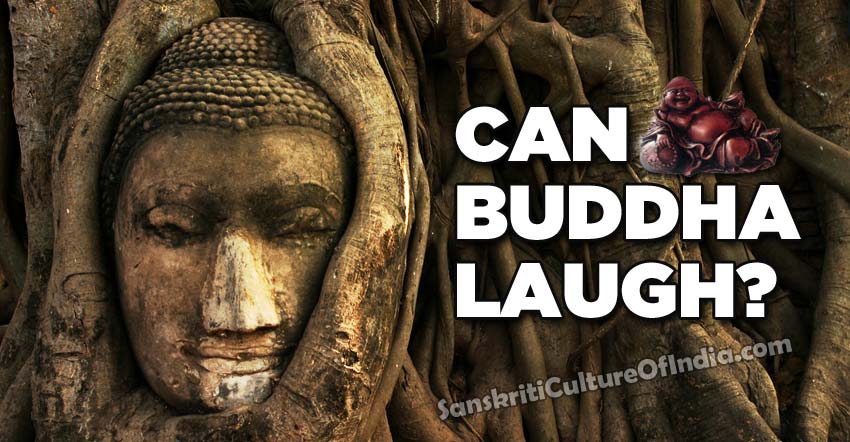 Two thousand five hundred years ago, Prince Siddhartha Gautama of the Sakya clan wanted to know the cause of suffering. When he discovered it, he became known as the Buddha, the enlightened one, enlightened enough to forge a path out of suffering into bliss.

At the moment of discovery, exhilarated by the insight, did the Buddha laugh? Could he have laughed perhaps at the foolishness of humankind that causes it to suffer the world of delusions? We will never know. Still, out there, on shelves across the world, we find images of the Laughing Buddha, a bald, pot-bellied monk raising his arms as he roars in laughter. Who is this Buddha, so different from the curly haired, slim and serene founder of Buddhism we otherwise know? To identify him we must journey from Thervada (the ancient monastic school) that originated in India to Mahayana (the later compassionate school) that spread across China, was influenced by Taoism and ultimately metamorphosed in Japan into Zen (the contemplative school). 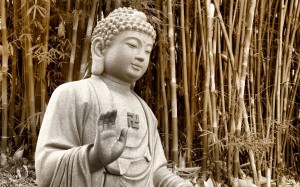 The word `Zen’ has its roots in the Sankrit word, `Dhyana’ meaning reflection. In the mythosphere of Zen masters, Sakyamuni Gautama was but one of the many Buddhas populating the cosmos. According to the `laughing’ school, many of these Buddhas did laugh to achieve, transmit or express enlightenment. The `serious’ school disagreed. They felt laughter was too frivolous to fit into the rather solemn monastic path of the Buddha. This led to hair-splitting debates on the nature of jocularity in monasteries across the Orient.

The scholastic attempt at resolving the apparent contradiction between laughter and an enlightened state began by distinguishing between six types of laughter. The classification based on Bharata’s 5th century classic `Natyashastra’ (much of India’s Sanskrit literature made its way to the Orient thanks to the silk route) arranged the spectrum of smiling through laughter in hierarchical fashion from the most reserved expressions to the most raucous. These included:

Given this hierarchical schema it is predictable that the Buddhist scholastics would incline to the view that the Buddha had only indulged in sita, the most reserved, tranquil, and circumspect form of laughter; actually, in terms of the English word, no laughter at all, only a barely perceptible smile. Sita is the level at which one approaches the spiritual, the transcendent, and the sublime. That it is manifested to the Buddha at all is only because he is standing at the threshold between the unenlightened and the 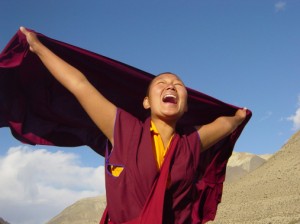 enlightened, like the yogic state of bhavamukha where one sees with both physical and spiritual sight. The Buddha sees the juxtaposition and the contradiction of the unenlightened and enlightened states. From this vantage point the world of samsara, maayaa, and avidyaa has the appearance of a comedy as the Buddha looks back upon the folly of the unenlightened and `laughs’ in the exalted sense of sita. This is the gist of the view that prevailed among the Buddhist scholastics, and has persisted by and large throughout the Buddhist world since.

With this historical setting and predisposition in mind, what is especially striking about the Zen Buddhist tradition, in both its Chinese and Japanese forms, is that in its literature, art, and religious practice, what one often encounters is the opposite of sita, namely, the fifth and sixth and supposedly lowest levels of laughter, offered both as authentic expressions of Buddhist enlightenment and evidence of the authenticity of the enlightenment. In Zen, Bharata’s aristocratic and spiritualistic schema seems abruptly to stand on its head.

Zen anecdotal records contain frequent reference to “loud roaring laughter”: of the master in response to a foolish statement by a monk, or of a monk in experiencing a breakthrough to enlightenment, or of the master in attempting to precipitate such an experience. Zen tales document the comical activities of enlightened masters. There is Gutei who amputated his attendant’s finger when the latter imitated his one-finger Zen representing the oneness of life. A Zen anecdote that has been circulating recently tells of a contemporary Zen master who lay dying. His monks had all gathered around his bed, from the most senior to the most novice monk. The senior monk leaned over to ask the dying master if he had any final words of advice for his monks. The old master slowly opened his eyes and in a weak voice whispered. “Tell them Truth is like a river.” The senior monk passed this bit of wisdom in turn to the monk next to him, and it circulated around the room. When the words reached the youngest monk he asked, “What does he mean.’Truth is like a river’?” The question was passed back around the room to the senior monk who leaned over the bed and asked, “Master, what do you mean, ‘Truth is like a river’?” Slowly the master opened his eyes and in a weak voice whispered, “Okay. Truth is not like a river.” Another Zen tale has a monk asking, “Where is the Buddha now?” The anticipated answer would be, “The Buddha is in Nirvaana.” The answer given, however, is: The Buddha is taking a shit!

The humor in these Zen narratives is an example of reducing a line of inquiry to an absurdity so that one is jolted into moving beyond the boxes and labels within which one hopes to capture and incarcerate reality. Perhaps thereby will be effected a direct and immediate realization of the truth which is beyond name and form.

In Zen art, monks were often shown in various stages of hilarity as if privy to some cosmic joke. The characters seem more raucous than reverential. One favorite theme has been the Three Laughing Sages. The reference is to the story of a Taoist hermit who for thirty years had faithfully kept a solemn vow never to cross a mountain stream that separated him from the “material world,” but when he was accompanying two visiting hermits on their departure, he was so enthralled with their conversation that he inadvertently walked across the stream with them, whereupon all three burst out in hearty laughter. Master Sengai, noted for his many humorous sketches and caricatures, does not depict the Buddha soberly instructing his disciples, but rather a naked little boy leaning over, farting! Another of Sengai’s sketches shows a bullfrog sitting, as if in meditation, but with a smirk on his face. The accompanying calligraphy reads: “If by sitting in meditation one becomes a Buddha…” (then all frogs are Buddhas).

At the heart of these comic images lies a confusion of categories, ordinarily kept distinct. Humor delivers something very different from one’s expectations–the comic surprise. In the process, humor breaks down the categories with which we would divide up experience into such dualities as sacred and profane, sublime and ordinary, beauty and ugliness, and even nirvana and samsara. 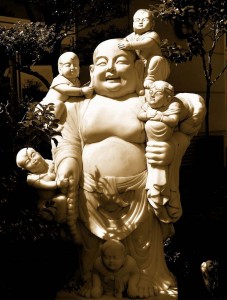 Thus making humor the `midwife of truth’, Zen masters converted Buddha’s laughter into the medium of enlightenment. But laughter was also an expression of enlightenment, Buddha’s laughter is a state of release from inner tensions into inner harmony. The Buddha does not laugh at himself or at others, he does not laugh because he has acquired something others don’t have. The laughter is neither cynical, sarcastic, bitter nor defiant. It is the laughter of compassion, an amusement at the interplay of knowledge and ignorance that makes up the joys and sorrows of what we call life.

Something of this spirit is reflected in the story of the late Zen master Taji, who lay dying. One of his disciples, recalling the fondness the roshi had for a certain cake, went in search of some in the bake shops of Tokyo. After some time he returned with the delicacy for the master, who smiled a feeble smile of appreciation and began nibbling at it. Later as the master grew visibly weaker, his disciples asked if he had any departing words of wisdom or advice. Taji said, “Yes.” As they drew closer, so as not to miss the faintest syllable, Taji whispered, “My, but this cake is delicious.” With those words he died.

Here is neither a cynical humor, born of resignation and despair, nor a defiant humor, making some last gesture of rebellion against the meaninglessness of life. Nor is this a sarcastic and bitter humor, mocking the disruption or cessation of the “best-laid schemes of mice and men”. The spirit is quite different. This is a humor of acceptance, a final “yes” to the opportunity of life, albeit transient. It expresses the joy of life, and of the smallest particulars of life, without at the same time frantically clutching to life.

The popular Laughing Buddha now found in many Indian homes is the Japanese Hotei, whose Chinese name, Pu-tai, literally means “linen sack.” He was a jolly, roly-poly monk of the tenth century who traveled from village to village, playing with children, bringing them trinkets and sweetmeats in his sack, like an Oriental Santa Claus, and otherwise using his sack as a sleeping bag. He is sometimes identified with the Buddha of the future, Maitreya, the compassionate one who will get rid of tears and bring back smiles. His laughter is both an expression of, and a inspiration for, enlightenment.