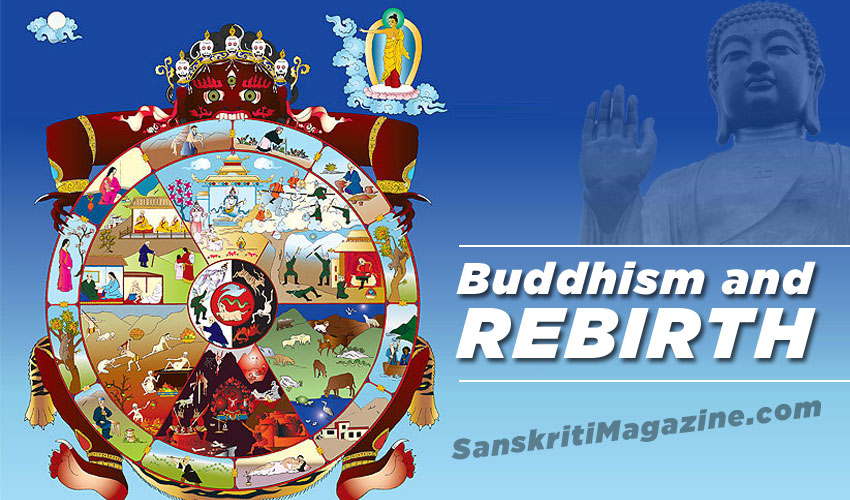 As long as this Kammic force exists there is re-birth, for beings are merely the visible manifestation of this invisible Kammic force. Death is nothing but the temporary end of this temporary phenomenon. It is not the complete annihilation of this so-called being. The organic life has ceased, but the Kammic force which hitherto actuated it has not been destroyed. As the Kammic force remains entirely undisturbed by the disintegration of the fleeting body, the passing away of the present dying thought-moment only conditions a fresh consciousness in another birth.

If we postulate a past, present, and a future life, then we are at once faced with the alleged mysterious problem — “What is the ultimate origin of life?”

One school, in attempting to solve the problem, postulates a first cause, God, viewed as a force or as an Almighty Being.

From the scientific standpoint, we are the direct products of the sperm and ovum cells provided by our parents. As such life precedes life. With regard to the origin of the first protoplasm of life, or colloid, scientists plead ignorance.

According to Buddhism we are born from the matrix of action (Kammayoni). Parents merely provide an infinitesimally small cell. As such being precedes being. At the moment of conception it is past Kamma that conditions the initial consciousness that vitalizes the fetus. It is this invisible Kammic energy, generated from the past birth that produces mental phenomena and the phenomenon of life in an already extent physical phenomenon, to complete the trio that constitutes man.

For a being to be born here a being must die somewhere. The birth of a being, which strictly means the arising of the five aggregates or psycho-physical phenomena in this present life, corresponds to the death of a being in a past life; just as, in conventional terms, the rising of the sun in one place means the setting of the sun in another place. This enigmatic statement may be better understood by imagining life as a wave and not as a straight line. Birth and death are only two phases of the same process. Birth precedes death, and death, on the other hand, precedes birth. The constant succession of birth and death in connection with each individual life flux constitutes what is technically known as Samsara — recurrent wandering.

What is the ultimate origin of life?

“Without cognizable end is this Samsara. A first beginning of beings, who, obstructed by ignorance and fettered by craving, wander and fare on, is not to be perceived.”

This life-stream flows ad infinitum, as long as it is fed by the muddy waters of ignorance and craving. When these two are completely cut off, then only, if one so wishes, does the stream cease to flow, rebirth ends as in the case of the Buddhas and Arahats. An ultimate beginning of this life-stream cannot be determined, as a stage cannot be perceived when this life-force was not fraught with ignorance and craving.

The Buddha has here referred merely to the beginning of the life-stream of living beings. It is left to scientists to speculate on the origin and the evolution of the universe. The Buddha does not attempt to solve all the ethical and philosophical problems that perplex mankind. Nor does He deal with theories and speculations that tend neither to edification nor to enlightenment. Nor does He demand blind faith from His adherents. He is chiefly concerned with the problem of suffering and its destruction. With but this one practical and specific purpose in view, all irrelevant side issues are completely ignored.

But how are we to believe that there is a past existence?

The most valuable evidence Buddhists cite in favor of rebirth is the Buddha, for He developed a knowledge which enabled Him to read past and future lives.

Following His instructions, His disciples also developed this knowledge and were able to read their past lives to a great extent.

Even some Indian Rishis, before the advent of the Buddha, were distinguished for such psychic powers as clairaudience, clairvoyance, thought-reading, remembering past births, etc.

There are also some persons, who probably in accordance with the laws of association, spontaneously develop the memory of their past birth, and remember fragments of their previous lives. Such cases are very rare, but those few well-attested, respectable cases tend to throw some light on the idea of a past birth. So are the experiences of some modern dependable psychics and strange cases of alternating and multiple personalities.

In hypnotic states some relate experiences of their past lives; while a few others, read the past lives of others and even heal diseases. [*]

* [See Many Mansions and The World Within by Gina Cerminara.]

Sometimes we get strange experiences which cannot be explained but by rebirth.

How often do we meet persons whom we have never met, and yet instinctively feel that they are quite familiar to us? How often do we visit places, and yet feel impressed that we are perfectly acquainted with those surroundings?

The Buddha tells us:

“Through previous associations or present advantage, that old love springs up again like the lotus in the water.”

Experiences of some reliable modern psychics, ghostly phenomena, spirit communications, strange alternating and multiple personalities and so on shed some light upon this problem of rebirth.

Into this world come Perfect Ones like the Buddhas and highly developed personalities. Do they evolve suddenly? Can they be the products of a single existence?

Heredity alone cannot account for them. “Else their ancestry would disclose it, their posterity, even greater than themselves, demonstrate it.”

Could they rise to such lofty heights if they had not lived noble lives and gained similar experiences in the past? Is it by mere chance that they are been born or those particular parents and placed under those favorable circumstances?

The few years that we are privileged to spend here or, for the most five score years, must certainly be an inadequate preparation for eternity.

If one believes in the present and in the future, it is quite logical to believe in the past. The present is the offspring of the past, and acts in turn as the parent of the future.

It is indeed a strong argument in favor of past and future lives that “in this world virtuous persons are very often unfortunate and vicious persons prosperous.”

“Whether we believe in a past existence or not, it forms the only reasonable hypothesis which bridges certain gaps in human knowledge concerning certain facts of every day life. Our reason tells us that this idea of past birth and Kamma alone can explain the degrees of difference that exist between twins, how men like Shakespeare with a very limited experience are able to portray with marvelous exactitude the most diverse types of human character, scenes and so forth of which they could have no actual knowledge, why the work of the genius invariably transcends his experience, the existence of infant precocity, the vast diversity in mind and morals, in brain and physique, in conditions, circumstances and environment observable throughout the world, and so forth.”

It should be stated that this doctrine of rebirth can neither be proved nor disproved experimentally, but it is accepted as an evidentially verifiable fact.

The cause of this Kamma, continues the Buddha, is avijja or ignorance of the Four Noble Truths. Ignorance is, therefore, the cause of birth and death; and its transmutation into knowingness or vijja is consequently their cessation.

The Five Precepts of Buddhism
Unearthing the bones of Buddha
Comment